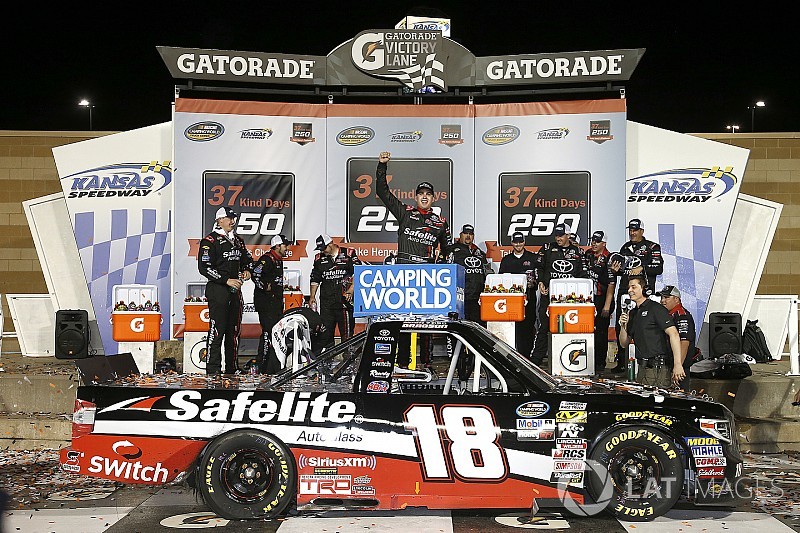 After a heartbreaking finish at Dover, Noah Gragson found redemption at Kansas Speedway with his first victory of the 2018 Camping World Truck Series season.

"This is such a relief for a driver that had a hard week last week when we were battling for the win," said an elated Gragson.

"We came back stronger this weekend ... this is a pretty damn cool moment."

But it was Justin Haley that led the way to kick off the final stage after a two-tire call. However, Gragson quickly retook control of the race.

He continued setting the pace until a debris caution with 69 laps to go. On the ensuing restart, Stewart Friesen made a bold move to take over the lead, but another caution quickly followed as Bo LeMastus went spinning through the grass.

Things went awry for Friesen during the yellow as his shifter knob handle broke and he failed to maintain pace car speed. As a result, NASCAR put him back to seventh for the restart that followed, but it proved to only be a minor inconvenience for Friesen.

He charged through the pack as the race went back green, quickly racing back up to the second position. Gragson held the led until 33 laps to go when he made his final stop of the night under green.

Friesen and Kyle Busch pitted a few laps later and unlike Gragson, they opted for just two tires. and as other drivers tried to stretch the fuel, Friesen made his way back into the effective race lead.

But drama soon followed as he and Busch made contact out of Turn 4, sending Busch sideways and into the grass with the left side tires. Both drivers continued and resumed their fierce battle.

Johnny Sauter was the actual leader, but was forced to finally pit with 16 laps to go for a splash of fuel. Myatt Snider took over control and tried to stretch the fuel to the end.

Behind him, Gragson tracked down Friesen and Busch with those four fresh tires, making quick work of him.

Snider ran out of fuel with six laps to go, creating a sketchy moment for the Kyle Busch Motorsport machines as they bolted around the slowing truck. Gragson then began to gap his boss as he raced to the checkered flag, earning his second career CWTS win and his first of the 2018 season.

"Well the 18 (Gragson) was coming but if I got by the 52 (Stewart) when I was supposed to there when I got ran into the grass , I probably could have gotten enough of a gap where I might have been able to hold the 18 off, but they were way faster than us.

"It just took too long to go and there on that last run, we didn't make enough adjustments. With the two tires, we got way too tight. Should have, could have, would have."

Gragson led the field to the green-flag, but not for long as the field fanned out three-wide out of Turn 2. Matt Crafton was able to take over the race lead and led the first five laps before Gragson got under him and reclaimed the top spot.

The remainder of the stage was fairly uneventful as Gragson earned yet another stage win with teammate and boss Kyle Busch second. Brett Moffitt was third, Ben Rhodes fourth, and Grant Enfinger fifth. Brandon Jones, Crafton, Sauter and Friesen rounded out the top-ten.

Busch had a slow stop between the stages and lost six positions on pit road. Gragson maintained the led for the following restart on Lap 50.

Moffitt moved to second and attempted to hunt down Gragson for the race lead.

Soon after, Rhodes' chances of victory faded away as he was forced to pit road with fuel pressure issues. He was then handed a penalty for too many crew members over the wall, leaving him multiple laps down.

The battle for the lead got interesting near stage's end as Gragson, Moffitt and Busch were nearly bumper-to-bumper. Ultimately, Gragson hung on to win the second stage of the night over Moffitt and Busch. Jones, Friesen, Nemechek, Enfinger, Sauter, Crafton and Coughlin rounded out the top-ten.