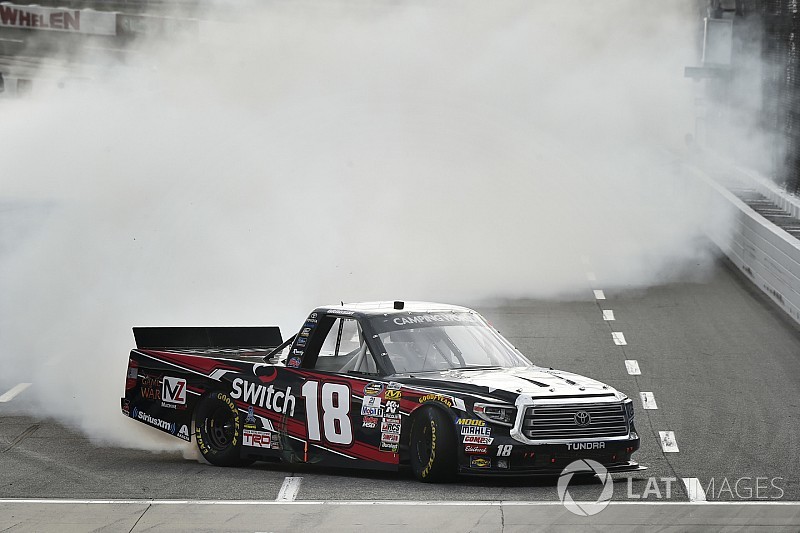 Gragson powered around two-time series champion Matt Crafton on a restart with 10 of 200 laps remaining and held on to win Saturday’s Texas Roadhouse 200 at Martinsville (Va.) Speedway for his first career victory.

The win for Gragson, 18, came in his 22nd career start. He finished fourth here in his first start at the iconic track in the spring.

“It was really tough racing against these veterans,” Gragson said. “For the last 40 laps I had Johnny Sauter trying to beat off my back bumper. He did that to us in the spring and I wasn’t going to let him pass me again like that again.

“We got that caution there at the end. You can’t pass on the outside at Martinsville, but I did it. All the hard work, I got the monkey off my back. All year I’ve been asked pretty much every day, ‘When are you going to get that win? When are we going to put up a banner at Kyle Busch Motorsports?’

“I’m just thankful for everyone who has brought me up in racing, I’m so very thankful. Man, I’m blown away.”

“I would have taken the outside (lane),” Crafton said when asked if he would have done something different on the restart. “This sucks.”

With 17 laps remaining, Bayley Currey spun exiting Turn 2 to bring out the caution. On the restart with 10 to go, Crafton led the way followed by Gragson, Sauter, Burton and Gilliland.

Crafton was the top-performing driver in the playoffs. Outside of Sauter in third, Christopher Bell ended up eighth, Ben Rhodes was ninth, Austin Cindric was 10th and John Hunter Nemechek ended up 30th.

Once Sauter got into the lead, he ran away from the field and easily captured the Stage 2 victory.

Bell, who entered the race as the series points leader, got off to a slow start thanks to a 15th-place effort in qualifying. “I can tell the difference between sticker (tires) and non-stickers, but track position is everything,” Bell said over his team radio.

During pit stops after the break, Bell exited pit road first and took over the race lead, followed by Ryan Truex, Crafton, Gragson and Rhodes. Sauter, who had a slow stop, lined up seventh on the restart.

After wearing out Crafton’s rear bumper for several laps, Sauter finally got around him and into the lead for the first time on Lap 72.

With 20 laps to go in Stage 2, Sauter led the way followed by Crafton and Gragson.

There were no on-track incidents in the second 50-lap segment.

Crafton elected not to pit during the first 50-lap segment’s only caution and held on to the lead to claim the Stage 1 victory over Sauter.

“That’s what we’re all about right now in these first two segments, we need to get all the Stage points we can,” Crafton said during the break.

On Lap 38, Nemechek exited Turn 2 and slammed into the outside wall, doing extensive damage to his truck. “We had no brake pedal,” Nemechek said over his team radio at the time.

Nemechek had to take his No. 8 Chevrolet to the garage and his race ended early. His chances to advance to the Championship 4 race at Homestead, Fla., took a giant hit. He will be credited with a 30th-place finish.

On the restart with six laps remaining in Stage 1, Crafton inherited the lead when he did not pit and was followed by Sauter and Rhodes.

Chris Windom immediately pulled his truck into the garage upon the start of the race due to engine issues. The team did not have a backup engine to use for the race.