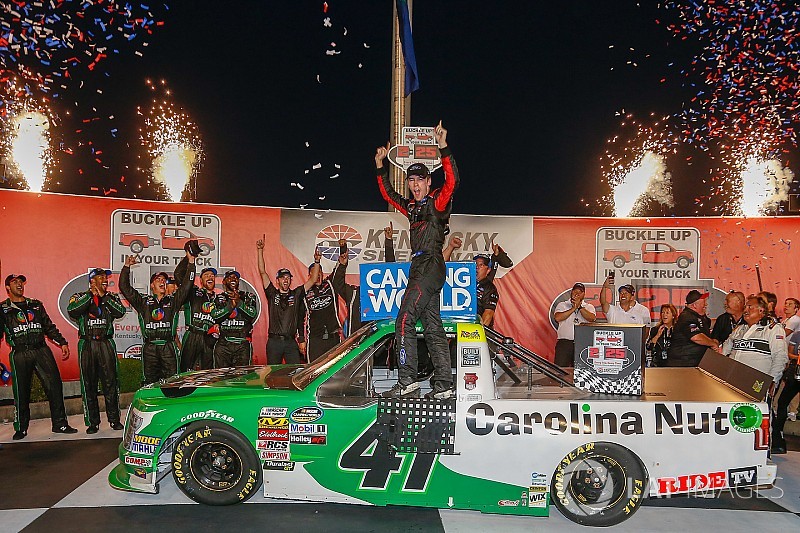 Rhodes took only fuel on his final pit stop and held off a furious charge from Canadian Stewart Friesen to win Thursday night’s Buckle It Up 225 at Kentucky Speedway.

"This has been such a long time coming and these guys deserve it so much," Rhodes, 21, said in Victory Lane as he pointed to his team. "They've been working their butts off.

"We've had a touch of bad luck this year. Everybody was feeling good about it tonight. We've had trucks like this all year long and we're finally able to showcase it. This is exactly what we needed."

Rhodes said even the strategy call we no sure thing as there was a fire in the pit stall in front of him as he made his final stop.

"I almost missed my stall with all the commotion going on," he said. "Huge night for us, though. This is our first win with Ford this year with ThorSport (Racing), so I'm pretty happy about that."

The victory is the second of his career in 62 starts and first at his hometown track for the native of Louisville, Ky.

On Lap 123 of 150, the leaders began a final series of green-flag pit stops to take enough fuel to make it to the end.

When the cycle was completed on Lap 127, Rhodes moved into the race lead thanks to a fuel-only pit stop. Friesen was running second and Crafton moved up to third.

Series points leader Johnny Sauter received two penalties during his top – speeding and a commitment line violation – which knocked him out of contention.

With 20 to go, Rhodes held about a half-a-second lead over Friesen. Friesen was closing the gap even further with 10 laps remaining.

Gragson was able to fend off a challenge from Jones and claimed the Stage 2 victory.

“Truck isn’t bad. The adjustments helped,” Enfinger said over his team radio. “Was better on the restart and then fell off halfway through.”

Following pit stops during the break between Stages 1 and 2, Rhodes was the first off pit road and held the lead when Stage 2 went green on Lap 43. He was followed by Gragson and Jones.

Gragson retook the lead on the restart with a push from Jones.

Friesen, who started from the rear of the field, moved into fourth with less than 20 laps left in Stage 2.

With five laps remaining in the stage, Jones made his way to the rear bumper of Gragson in an attempt to make a pass for the lead.

With three laps left, Gragson was able to put some distance between himself and Jones.

After grabbing the lead with two to go, Rhodes held off Gragson to claim the Stage 1 victory, this third stage victory of the season.

Gragson, the pole-winner, led the field to green but before a lap could be completed, caution was displayed for an incident involving Tyler Matthews and Nemechek.

The returned to green on Lap 5.

With 20 laps remaining in Stage 1, Gragson held a more than one second lead over Rhodes. Gilliland was running in third.

With 10 laps to go in the stage, Rhodes closed to Gragson’s rear bumper and started working on making a pass for the lead.

With eight laps left, Rhodes grabbed the lead at the start/finish line only to see Gragson retake the top spot as the two raced into Turn 1.

Thanks to an assist from lapped traffic, Rhodes returned to the lead with two laps remaining in the stage and began to pull away from Gragson.

Three drivers – Myatt Snider (backup truck), Friesen (engine change) and Nemechek (unapproved adjustments) – all started the race from the rear of the field.