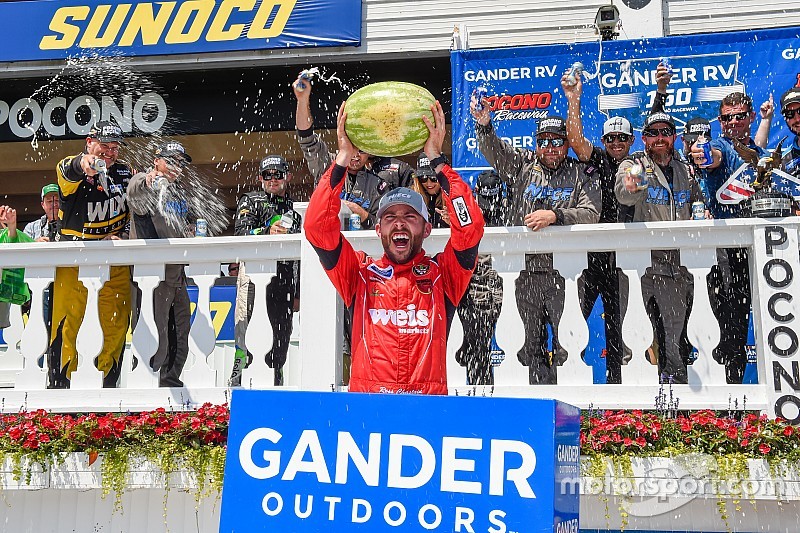 Chastain grabbed the lead on Lap 1 and ended up remaining out front for 54 of 60 laps, easily holding off Tyler Ankrum to win the Gander RV 150.

The win is Chastain’s third in the Truck Series this season as he continues to chase his first NASCAR championship.

"It takes us being a little mad. I'm not going to lie, we were a little mad we lost Nick Harrison," Chastain said. "We realize everybody goes when it's their time but, man, we miss that big boy. A lot of these boys worked with him, I got to work with him at Kaulig Racing this year. Man, we miss him.

"We stomped them in the dirt, we pressed the attack. I'm so dang excited."

Harrison, who was crew chief for Justin Haley at Kaulig in the Xfinity Series, died in his sleep last Sunday. He was 37.

Following the break between Stages 2 and 3, those drivers who had yet to pit did, which left Chastain back in the lead on the restart on Lap 35.

He was followed by Ankrum and Matt Crafton.

With 20 laps remaining in the race, Chastain had opened up a 1.6-second margin on Ankrum while Ben Rhodes moved up to third.

Ankrum had cut Chastain’s lead to less than a second with 15 laps to go as Eckes ran in third. Burton was fourth and Rhodes fifth.

After 50 laps, Chastain was able to expand his lead to more than 2 seconds over Ankrum.

Burton held off Moffitt to take the Stage 2 win, his first stage victory of the 2019 season.

Following the break between Stages 1 and 2, several lead-lap trucks elected to pit but Chastain stayed out and remained in the lead when the race restarted on Lap 20.

Creed tagged the wall on the restart but continued on as no caution was called. He appeared to suffer damage to his splitter.

With 10 laps to go in the second stage, Chastain held about a 1-second lead over Burton while Moffitt ran third.

On Lap 23, Austin Hill, the pole-winner, went to the garage with problems with his clutch.

Chastain elected to make a green-flag pit stop on Lap 27 allowing Burton to inherit the lead for the first time in the race.

Chastain easily held off Sheldon Creed to take the win in the 15-lap Stage 1 which was marred with two early cautions for accidents.

Burton was third, Hill was fourth and Moffitt completed the top-five.

Hill started on the pole but Stewart Friesen made a three-wide move, got loose and spun entering Turn 1 on the first lap, hitting the wall and making contact with Anthony Alfredo.

Once the caution was displayed, Chastain emerged as the leader. The race returned to green on Lap 6.

On the restart, Bryan Dauzat spun in Turn 1 and hit the wall as well, again bringing out a caution. Chastain still led the way on the restart on Lap 9.

With five laps remaining in the first stage, Chastain had about a 1-second lead over Creed with Burton in third.