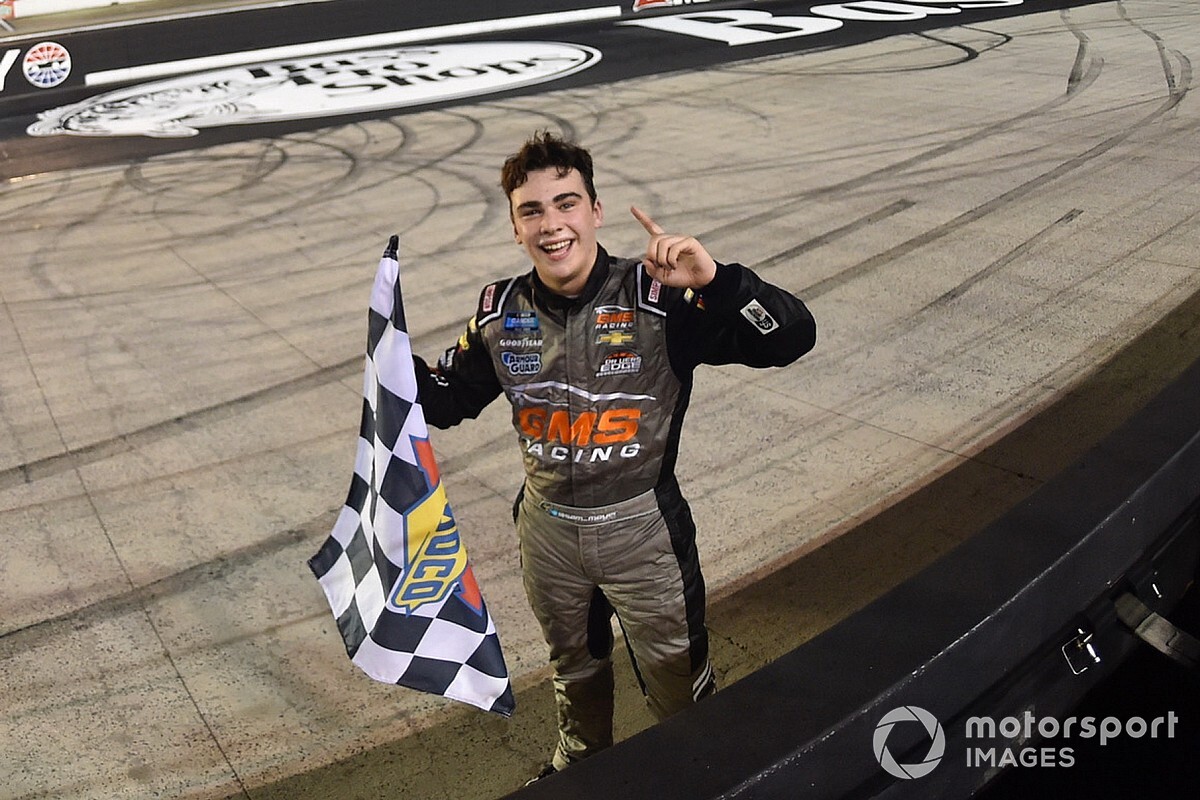 Mayer, the 17-year-old son of former IndyCar and road course driver Scott Mayer, has been running a partial Truck schedule this season with GMS Racing while also competing in ARCA.

Mayer grabbed the lead from his teammate Brett Moffitt with 29 of 200 laps remaining and never looked back, cruising to a more than 4.4-second advantage over Moffitt at the finish.

The win denied Moffitt his first win of the season, a victory that would have also locked Moffitt into the second round of the playoffs.

“What? Oh my gosh, Bristol dude. I love this place,” Mayer said. “This is win No. 3 for me here and man, I don’t know what to say. I can’t thank the guys back at the shop enough.

“They work their tails off. We fired off so good. We only made like one trackbar adjustment all day, that’s it. That feels so good.”

Asked if he thought he was capable of winning so soon, Mayer said, “Not really. I knew the team was. I knew everyone that was a part of his No. 24 team. I knew they could do it. I just had to come here and perform.

“That last pit stop put us in a perfect place and we were able to drive right by all of them. That’s such a good feeling!”

Mayer’s win comes in his seventh series start and it’s the seventh win of the 2020 season for GMS Racing.

The win is Mayer's fifth this season in that series and he has a total of nine victories in 2020 among the three ARCA series - ARCA Menards, ARCA East and ARCA West.

Earlier this week, JR Motorsports announced Mayer would run half the 2021 Xfinity Series season with the organization and move fulltime to the series in 2022.

Following the break between Stages 2 and 3, several trucks elected to pit and Ankrum planned to be one of them but missed the entrance to pit road and had to come around twice.

Sauter was penalized for speeding on pit road during his stop and had to restart from the rear of the field.

On the restart on Lap 120, Moffitt led the way followed by Carson Hocevar.

On Lap 127, Derek Kraus moved into the runner-up spot behind Moffitt as Mayer moved into third. Mayer passed Kraus for second on Lap 133.

With 50 laps remaining in the race, Mayer had moved within a half-second of Moffitt with Zane Smith not far behind in third.

Austin Wayne Smith wrecked in Turn 3 on Lap 155 after contact with Austin Hill to bring out a caution.

On the restart on Lap 167, Moffitt continued to lead the way followed by Mayer. Austin Hill was held two laps on pit road for having too many men over the wall while under the damaged vehicle policy.

On Lap 171, Mayer went to the inside of Moffitt and came away with the lead off Turn 2.

With 15 laps to go in the race, Mayer opened up a more than 1-second lead over Moffitt.

Mayer’s lead over Moffitt expanded to more than 4 seconds with five laps remaining.

Ankrum led every green-flag lap on his way to the Stage 2 win over Sauter.

Moffitt was third, Zane Smith fourth and Mayer rounded out the top-five.

Following the break between Stages 1 and 2, Moffitt and others pit but several lead-lap trucks remained on the track with Ankrum inheriting the lead.

On the restart on Lap 68, Ankrum was followed by Creed.

Danny Bohn spun off Turn 4 on Lap 82 to bring out a caution. A handful of trucks elected to pit, including Creed, but Creed was penalized for speeding on pit road and had to restart from the rear of the field.

Ankrum continued to lead the way on the restart on Lap 89 followed by Sauter.

Zane Smith powered to the runner-up position shortly after the restart. Four laps later Sauter took the position back.

With 10 laps remaining in the second stage, Ankrum opened a 2-second lead over Sauter as Zane Smith ran third.

Moffitt cruised to the Stage 1 win over his teammate, Ankrum, his sixth stage victory of the 2020 season.

Creed was third, Zane Smith fourth and Enfinger rounded out the top-five.

Enfinger started on the pole but Moffitt quickly moved into the lead in Turns 1 and 2 to grab the lead.

On Lap 8, NASCAR displayed a caution for debris in Turn 1 which appeared to come off the No. 16 of Austin Hill after he made contact with the wall.

The race returned to green on Lap 14 with Moffitt in the lead.

With 30 laps remaining in the first stage, GMS Racing teammates held the top four positions with Moffitt out front and holding nearly a second lead over Ankrum.

With 20 laps to go in Stage 1, Moffit’s lead had expanded to more than 1.5 seconds over Ankrum with Creed in third.

On Lap 45, Natalie Decker got into the wall in Turns 1 and 2 but was able to continue on without a caution.