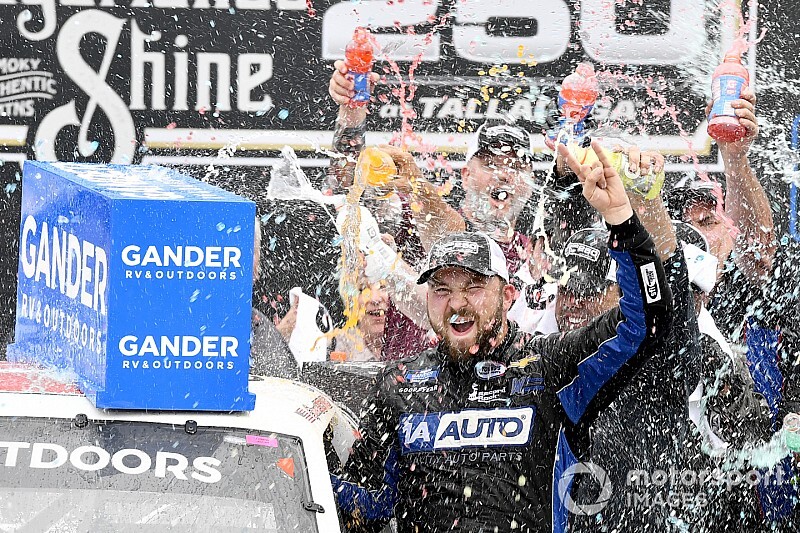 Spencer Boyd became the surprise winner of Saturday’s NASCAR Truck Series when Johnny Sauter was penalized for a yellow line violation on the last lap.

Sauter held the lead on the last lap of overtime and in an effort to halt the advance of Riley Herbst, he blocked Herbst, sending him below the double yellow line.

Sauter took the checkered flag but NASCAR immediately put the finish under review and within minutes black-flagged Sauter for forcing a competitor below the yellow lines.

Boyd, who originally was credited with second, was named the winner of Saturday’s Sugarlands Shine 250 at Talladega (Ala.) Superspeedway, his first series victory.

“I got out and my guys said it was under review and you never know what’s going to happen here,” Boyd, 24, said. “The guys gave me a great truck. I’m sitting there thinking second is amazing for us, we’re happy, and then one of my crew guys yells, ‘You won!’

“You dream of winning a NASCAR race. Four years I was selling cars with my dad at Hendrick Automotive Group. A lot of people believed in me to get me to this point – so many people helping me do this.

“It’s Talladega! I don’t drink beer but it might happen tonight!”

Sauter was credited with a 14th-place finish, the last truck on the lead lap.

“It’s not the first win NASCAR has taken away from me,” Sauter said. “I went down there to put a little block on (Herbst) and then I got hooked sideways. That’s just plate racing. I didn’t block his advance or anything like that.

“I just hate it for my guys, they deserve better than that. I did what I thought was right to win the race. Whatever. You got rules, you got rules, I guess.”

Several trucks hit pit road on Lap 65 of 98 to begin a round of green-flag pit stops. Once the cycle of stops was complete on Lap 73, Sauter emerged as the leader followed by Grant Enfinger and Harrison Burton.

With 15 laps to go, Sauter maintained a small lead over Enfinger with Burton in third.

On Lap 81, Anthony Alfredo wrecked off Turn 4 to bring out a caution and bunch the field. The race returned to green on Lap 87 with Sauter still out front.

While throwing a block, Ross Chastain got turned by Sheldon Creed on Lap 87 which triggered a multi-truck accident that brought out a caution and then a red-flag. “That was on me,” Chastain said after the incident.

When the race returned to green on Lap 92, Creed was in the lead followed by Gilliland, Gus Dean, Sauter and Matt Crafton.

Dean got turned by Gilliland on Lap 93 to bring out another caution and send the race into overtime.

Friesen warded off a challenge from Moffitt to take the Stage 2 victory.

Austin Wayne Self was third, Creed fourth and Sauter ended up fifth.

Following the break between Stages 1 and 2, most of the lead-lap trucks elected to pit but Chastain remained on the track and inherited the lead.

On the restart on Lap 27, Chastain was followed by Herbst and Enfinger.

Enfinger and Chastain traded the lead on Lap 29. Moffitt moved into the lead just as Tyler Dippel spun on the backstretch on Lap 30 to bring out a caution. John Hunter Nemechek also got caught up in the incident.

When the race restarted on Lap 35, Moffitt led the way followed by Crafton and Austin Hill.

With five laps remaining in the stage, Crafton grabbed the lead briefly only to see Moffitt take it back. Hill then powered into the lead with four laps remaining.

On Lap 39, Friesen got a push from Moffitt into the lead.

Creed held off Moffitt as Chevrolets swept the top five positions at the end of Stage 1.

Chastain was third, Nemechek was fourth and Friesen completed the top-five.

Crafton, who started on the pole, led the first lap, but Sauter got around him to take the top spot on Lap 2.

Five laps into the race, Sauter continued to lead over Crafton with Burton running third.

On Lap 7, Creed powered to the lead and on the next lap, Burton spun entering Turn 1 to bring out the first caution in the race. Chastain pit just as the caution came out with what he thought was a flat tire.

NASCAR eventually displayed the red flag to check and clean the frontstretch of possible fluid on the track.

Several lead-lap trucks pit but Creed stayed on the track and remained in the lead when the race returned to green on Lap 15.

With five laps remaining in the first stage, Creed continued to hold a small lead over Moffitt with Friesen in third.

Jordan Anderson started the race from the rear of the field after missing the driver’s meeting.