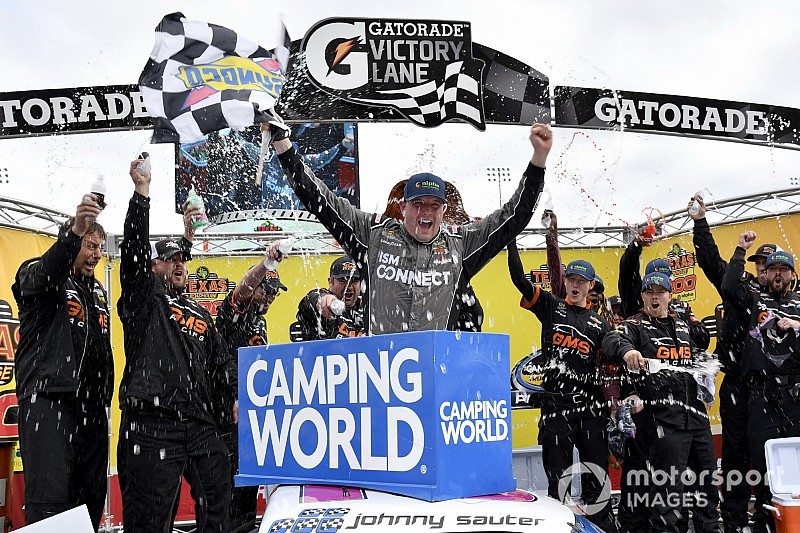 Johnny Sauter will once again compete for the Camping World Truck Series championship.

Sauter held off Brett Moffitt to win Saturday’s Texas Roadhouse 200 at Martinsville (Va.) Speedway and locked himself in the Championship 4 race at Homestead, Fla., in three weeks. It’s the third consecutive season Sauter has advanced to the title race.

The win is Sauter’s sixth of the season, fourth at Martinsville and 23rd of his career.

"These guys busted their tails - everybody at GMS Racing. You know we came here and we had done a lot of work with a new set-up and we had it already to go and we came here and it was raining (on Friday) and I was like, 'Now what?' And they said we'd run the old stuff because we couldn't run that now," Sauter said in Victory Lane.

"Track position just seems to be the name of the game here any more. This is a a big win."

Asked about the next-to-last restart where he briefly lost the lead to Myatt Snider, Sauter said, "I felt like I had a good restart. I'm not sure he would have made the corner if he didn't dive-bomb it in there. I had really good grip on the outside.

"Just so proud of everybody at GMS Racing. I'm going to Homestead to fight for a championship. That's what it's all about."

On Lap 153 of 200, Dawson Cram wrecked after contact from Stewart Friesen on the frontstretch to bring out a caution. Most of the lead-lap cars remained on the track and Sauter continued to lead the way on the restart on Lap 160.

As Snider powered to the lead over Sauter on the restart, Grant Enfinger and Chase Purdy both got turned around to bring the caution back out.

The race returned to green on Lap 168 with Snider in the lead followed by Sauter and Moffitt.

With 20 races left in the race, Sauter moved out to an almost 2-second lead over Snider with Moffitt having moved into third.

With 13 laps to go, Moffitt got around Snider to take the second position.

Sauter led every green-flag lap on his way to the Stage 2 victory over Gragson.

Following the break between Stages 1 and 2, Sauter remained on the track and continued to lead the way when the second stage went green on Lap 61.

On Lap 62, Friesen spun out after suffering a flat tire following contact with Sheldon Creed. The race returned to green on Lap 67.

With 15 laps remaining in the second stage, Sauter held a small lead over Noah Gragson with Crafton more than three seconds behind in third.

With 10 to go, Gilliland went three-wide to move into the third position behind Sauter and Gragson.

Nemechek moved into the third position with four laps remaining

After a late-stage caution, Sauter held off Gragson to claim the Stage 1 win.

Gilliland, who started on the pole, took command early and remained out front through the first 20 laps.

With 30 to go in the first stage, Gilliland held a 1.6-second lead over Burton with Rhodes close behind in third.

Burton had cut Gilliland’s margin down to 1.1 seconds with 20 laps left in the first stage. Rhodes was third, Enfinger fourth and Sauter fifth.

On Lap 37, a caution was displayed when Chad Finley wrecked. Both Gilliland and Burton took the opportunity to pit for fuel and tires. On the restart on Lap 44, Sauter took over the lead followed by Gragson and Rhodes.

With five laps left in the stage, Sauter maintained a small advantage over Gragson.