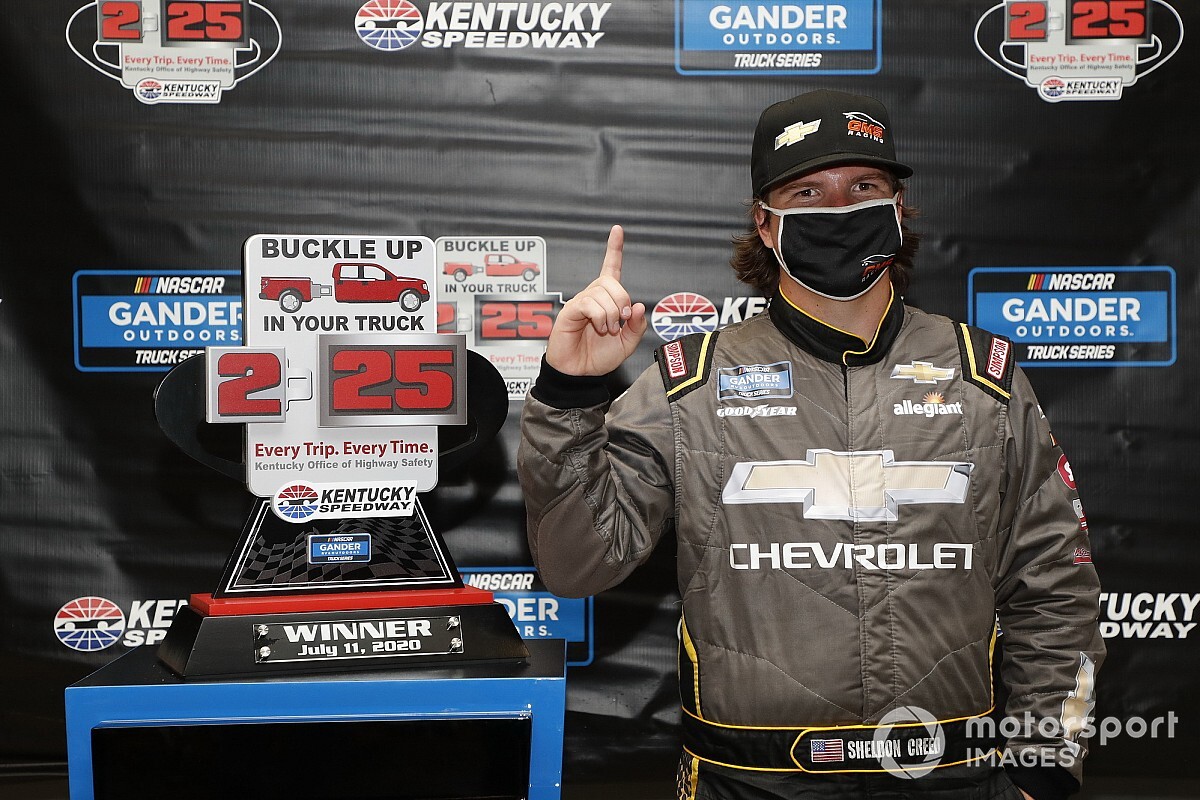 It’s probably not the way Sheldon Creed envisioned getting his first win, but it counts nonetheless.

Creed, 22, was declared the winner of Saturday night’s NASCAR Truck Series race at Kentucky Speedway when NASCAR called the race after the completion of 71 of a scheduled 150 laps due to persistent rain in the area.

Almost immediately after the conclusion of Stage 2 – which Creed won – the race was red-flagged for lightning in the area as thunderstorms rolled into the area. The event never got restarted.

The win is Creed’s first in a NASCAR national series. His previous best finish was second (twice in the 2019 season) and was coming off a third-place finish at Pocono on June 28. He is also a four-time race winner in ARCA and captured the 2018 series championship.

Creed easily held off Rhodes to claim the Stage 2 win as thunderstorms began to envelope the area around the track.

Just after stage concluded, NASCAR was forced to red-flag the race for lightning in the area.

Crafton finished third in the stage, Sauter fourth and Hill rounded out the top-five.

Following the break between Stages 1 and 2, most of the lead-lap cars pit but Parker Kligerman was among those who remained on the track and inherited the lead. Moffitt was penalized during his pit stop for a safety violation and had to restart from the rear of the field.

On the restart on Lap 41, Kligerman was followed by Crafton and Rhodes. Smith, the first truck off pit road, restarted fifth.

Bryant Barnhill spun off Turn 4 on Lap 44 which brought out another caution as thunderstorms closed in around the area of the track. The race returned to green on Lap 47.

Just as Rhodes grabbed the lead on the restart, Jennifer Jo Cobb and Korbin Forrister wrecked in Turns 1 and 2 and the caution was displayed again.

On the restart on Lap 52, Rhodes was followed by Kligerman, Creed and Smith.

Creed went to the inside of Rhodes off Turn 4 and grabbed the lead for the first time in the race.

With 15 laps remaining in the stage, Creed had built up a nearly 1-second lead over Rhodes as Smith moved into third.

On Lap 68, Crafton got around Smith and moved into the third position.

Smith grabbed the lead from Moffitt with 10 of 35 laps remaining and then held off a furious charge from Moffitt on the final lap to claim the Stage 1 win.

Creed was third, Eckes fourth and Ankrum rounded out the top-five.

Moffitt started on the pole thanks to a random draw and led he first lap before a caution was displayed on Lap 2 for fluid on the backstretch. The No. 20 of Spencer Boyd appeared to suffer an oil leak.

The race returned to green on Lap 8 after a lengthy cleanup.

On Lap 14, Codie Rohrbaugh spun entering Turn 1 and slammed into the wall to bring out another caution.

The lead-lap cars remained on the track and Moffitt continued to lead the way on the restart on Lap 19.

Tim Viens spun in Turn 3 on Lap 23 to bring the caution back out. Ryan Truex was forced to pit under green prior to the caution because of a flat tire.

A handful of lead-lap trucks elected to pit but Moffitt remained in the lead when the race returned to green on Lap 26.

Smith quickly powered around Moffitt and into the lead on the restart.

Prior to the race, the trucks of Johnny Sauter, Derek Kraus and Ben Rhodes were assessed L1 penalties for unapproved triangular filler panels. All three had to start the race from the rear of the field and each will be assessed 10-point penalties in the driver and owner penalties.

Other drivers who had to start from the rear: Ray Ciccarelli for missing the rookie meeting and Trey Hutchens III for unapproved adjustments.