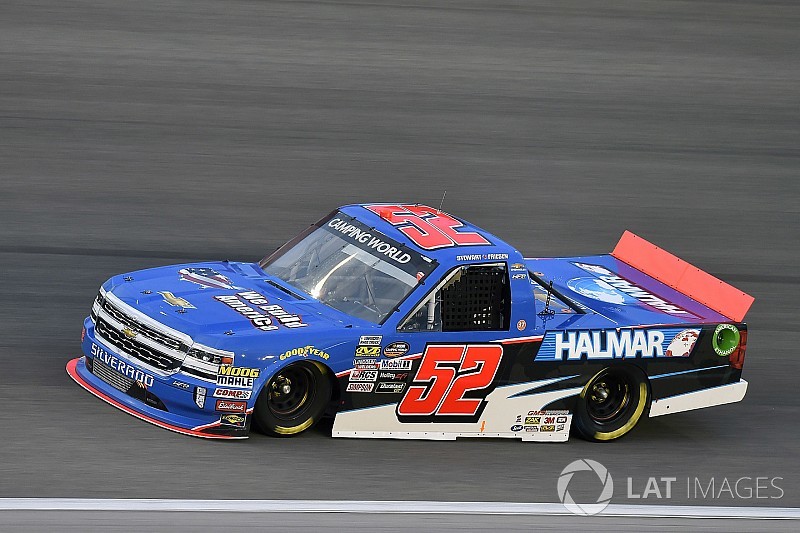 After getting collected in an accident last week at Dover in a fast truck, Friesen returned to action and contended for the win Friday night at Kansas Speedway and came away with first podium finish of the season.

“This was fun,” said Friesen after the race. “I’m just super proud of the entire HALMAR Race team, (owner) Chris Larsen and the GMS (Racing) fabrication shop - they’re second to none.”

Friesen qualified eighth for his sixth consecutive start inside the top-10 and quickly moved through the field to run in the top-five midway through the race. He took the lead for the first time on Lap 103.

The Niagara-on-the-Lake, Ontario, native would lead two times in the race for a total of six laps.

While it was his best finish of the season, the race was full of events that almost cost Friesen the chance at a good finish.

Under caution midway through the race, his gear shift knob fell off and he had to slow to straighten things out which put him back in the field on the restart. Later, he triggered an accident with Kyle Busch racing back through the field, which sent Busch racing through the infield grass.

“(The gear) shifter broke off at the handle under caution and I wanted to make sure the knob didn’t get under the gas pedal,” said Friesen. “It broke off once we got the lead and I was trying to save fuel and I had to power down the (truck) and power it back up.”

As for the incident with Busch that sent him into the grass on the frontstretch, Friesen said it was a product of hard racing for position and not intentional.

“Apologies to Kyle, I didn’t mean to run him down in the grass like that,” said Friesen. “We were coming up on a lapped truck and going for position as I thought this might be for the lead (after pit stops recycled through) and I was probably too aggressive there.

“It was cool to race Kyle (Busch), Noah (Gragson) and that entire race team tonight,” said Friesen. “You have to give your all against those guys.”

“The No. 52 team battled all night and Trip made a great adjustment to get us competitive,” Friesen said. “I just can’t thank Chris (Larsen) and everyone enough for giving me a great Chevrolet Silverado to drive.”

Friesen, who’s now finished in the top six in three of the six Truck Series races this season, isn’t dwelling on when his first win will come.

“I would love to win one of these one day,” he said. “Wins are tough and they are hard to come by no matter what division you are in. You can have the best of the best (equipment) and something not go your way.

“We’re just going to keep our heads down and work hard. When it happens, it will happen.”