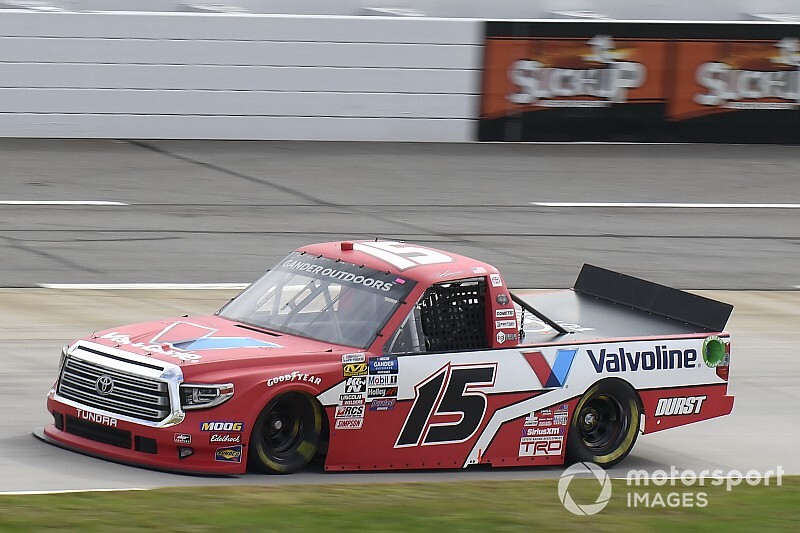 Tanner Gray grew up in the world of drag racing but has never wavered in his desire to be a NASCAR driver.

Gray, a third-generation drag racer, is taking the next step in his NASCAR immersion by making his first Gander Outdoors Truck Series start on Saturday at Martinsville (Va.) Speedway.

His NASCAR path is an unusual one – it began like many other aspiring drivers competing in Late Models and midgets but then took a turn to drag racing, where he won the 2018 NHRA Pro Stock championship at 19 years old.

But instead of his NHRA title launching a long drag racing career, it sent him right back to NASCAR, determined more than ever to succeed in his first love, stock car racing.

“Ever since I was a young kid, I wanted to race NASCAR. Everybody around the drag strip would ask me, ‘Hey, are you going drag racing’ and I was like, ‘No, I’m never doing this, I’m going to be a NASCAR driver.’

“Needless to say I got some odd looks.”

And perhaps rightly so as Gray was the son of national event champion Shane Gray and grandson of Funny Car and Pro Stock Champion Johnny Gray.

“As I grew up, the opportunity to drag race was always right there. I got a little frustrated with how my circle track career was going so my dad was about to get out of his seat and I tried out his car,” Tanner, now 20, said of his decision to try drag racing.

“The first time I couldn’t even get the car in gear to do a burnout. I tried another time and picked up on it, did really good and it took off from there.”

From drag car to stock car

Gray made NHRA history 13 days before his 18th birthday (in 2017) becoming its youngest winner with his victory in the final round at the 18th Annual Denso Spark Plug Nationals at The Strip at Las Vegas Motor Speedway.

He won the 2017 Auto Club Road to the Future Award, which is given to the top rookie from all of the sport’s pro categories, including Pro Stock Motorcycle, Top Fuel and Funny Car.

In 2018, Gray won eight times on his way to the Pro Stock title, becoming the youngest ever NHRA season champion.

But even then, NASCAR was always on his mind.

“Between rounds drag racing, I would be watching the Truck, Xfinity or Cup races,” Gray said. “Halfway through my first year in Pro Stock I was still dead-set that I wanted to go back circle track racing.

“Early in 2018 I had already decided that I wanted to give stock cars another try but I wanted to do it the right way. So whether I won the championship or not, I was going away from drag racing.

“I won really everything I could win in it. I ended the year with crazy numbers and stats and there was talk whether the class would be around much longer, so it was good timing.”

Gray’s NASCAR plan for 2019, completed after getting together with team owner David Gilliland, was designed to give him multiple opportunities to run in competitive equipment.

He competed fulltime in K&N with DGR-Crosley, which Gilliland co-owns, and will make three starts in the Truck series, including this weekend at Martinsville, with the team. He also ran eight ARCA races fielded by DGR-Crosley.

Coming off a fairly solid debut in the K&N East series, one might expect Gray to be highly anticipating his NASCAR national series debut and taking the next step in his racing progression.

“Honestly, I’ve been very nervous and not really sure I was ready to take the step and make that move,” he said. “In K&N, the top three or four drivers are pretty good and the cars are close and the racing is pretty tight.

“Then you come here are and the top 12 are so good. You’re racing guys like Matt Crafton and Johnny Sauter and Grant Enfinger, Todd (Gilliland), just a lot of really good guys. It’s tough and I was a little bit nervous about coming here.”

While he called his first full day of practice “a little rocky to start,” Gray had become more comfortable and confident as the day progressed. He was 15th fastest in the first practice and seventh in final practice.

“We got better there at the end. We got to test here about two months ago and I didn’t leave feeling real confident,” Gray said. “We’ve definitely learned a lot throughout the day and made a lot of changes.

“It’s definitely different than the K&N series and ARCA. Everything moves at a much faster pace and obviously the competition is much better. We have a lot of speed in this truck I think. I didn’t do a very good job showing everything that it’s got.

“Even in the last practice, I felt I had more in me and more in the truck to go faster.”

Gray’s three Truck starts – the others will be ISM Raceway near Phoenix and Homestead, Fla. – will go a long way to determining his plans for 2020 but he remains focused on a NASCAR career.

“I want to see how these races turn out for me; I don’t want to jump ahead of myself or commit myself to something I shouldn’t be doing or I’m not ready for,” Gray said. “If everything goes well, the goal will be to run a fulltime Truck schedule next year.

“If they don’t go good or I think I’m not ready, then we’ll take a step back and see what the best options are. “I love NASCAR; I just love racing in general. I want to see where it can take me.”