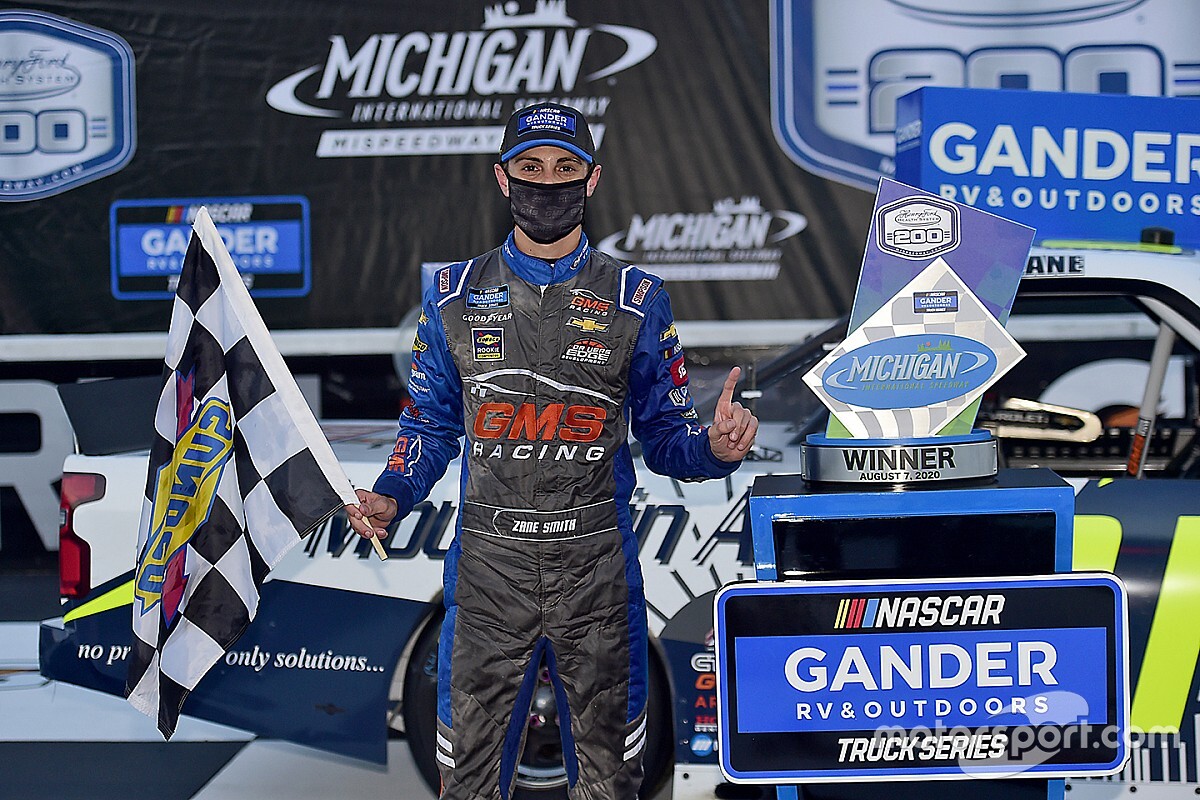 Leader Grant Enfinger wrecked at the start of the second overtime opening the door for Zane Smith to capture his first NASCAR Truck Series win.

Enfinger led the way on the start of a second 2-lap overtime but appeared to try to block a pass by Tanner Gray and in the process wrecked and spun into the infield.

Christian Eckes then moved into the lead but after taking the white flag signaling the start of the final lap, Smith went to the inside of Eckes entering Turn 1 and came off Turn 2 with the lead and the victory.

The final lap was the only one Smith, 21, led in the race. The win is the first of career in 12 series starts. His previous best finish was third earlier this season at Charlotte.

"I don't even know where to start," an emotional Smith said after the race. "It's just unbelievable. A lot of this sport as we know is about money and I don't come from that. Making it to this point, and with a win with such an awesome team like GMS Racing is something special. I wish I was here celebrating with my parents and my girlfriend.
"Man, this is a lot to take in. That was awesome racing with all my best friends like Christian Eckes there at the end. It was just an unbelievable day."

On Lap 58 of the originally scheduled 100-lap race, Chandler Smith wrecked after contact from Ben Rhodes to bring out a caution. The lead-lap trucks all pit with Johnny Sauter the first off pit road. On the restart on Lap 65, Sauter was followed by John Hunter Nemechek.

Nemechek quickly got around Sauter on the restart to grab the lead for the first time in the race.

On Lap 67, Enfinger got around Nemechek to take the lead as Sauter ran third.

With 30 laps to go in the race, Enfinger continued to lead with Sauter challenging for the lead.

On Lap 72, Austin Wayne Self wrecked in Turn 2 to bring out the seventh caution of the race. On the restart on Lap 77, Enfinger continued to lead the way followed by Nemechek and Austin Hill.

With 20 laps remaining, Sauter had mounted a serious challenge to Enfinger for the lead as Sheldon Creed remained in third.

While racing for the lead with Enfinger, Sauter spun and wrecked while racing on the inside of Enfinger which brought out another caution.

“He won’t win the championship, I can guarantee that,” Sauter said over his team radio, apparently referring to Enfinger. On the restart with 10 laps remaining, Enfinger remained the leader followed by Gray and Creed.

Ray Ciccarelli spun shortly after the restart on the backstretch to put the race again under caution. Enfinger continued to lead on the restart with six laps to go.

Tyler Hill spun down the frontstretch on Lap 96 which brought out the record 10th caution of the race and sent it into a two-lap overtime with Enfinger leading the way.

Brennan Poole spun on the first lap after the restart sending the race into a second overtime. Once again, Enfinger led the way.

Sauter held off a fast-approaching Moffitt on fresher tires to claim the Stage 2 win, his first stage victory of the 2020 season.

Following the break between Stages 1 and 2, most of the lead-lap trucks elected to pit but Smith remained on the track and in the lead. On the restart on Lap 25, Smith was followed by Lessard.

Lessard quickly grabbed the lead on the restart as Kligerman moved into second.

On Lap 29, Sauter moved into second with Kligerman dropping to third. Moffitt, who had pit under the stage break, had moved to seventh.

Lessard quickly fell off the pace with a flat tire which allowed Sauter to move into the lead with 11 laps remaining in the second stage.

With five laps to go in the stage, Sauter had built a more than 2.5-second lead over Moffitt. Gilliland was third, Enfinger fourth and Gray rounded out the top-five.

Moffitt secured the Stage 1 victory when a caution came out with one lap remaining in the 20-lap segment.

Chandler Smith, who started on the pole thanks to a random draw, lost the lead quickly as Moffitt moved into the top spot on Lap 1.

On Lap 4, Trey Hutchens III and Josh Reaume wrecked on the frontstretch to bring out the first caution of the race. On the restart on Lap 8, Moffitt led the way followed by Eckes.

With 10 laps remaining in the first stage, Moffitt remained out front with Creed close behind in second and Rhodes in third.

Poole spun off Turn 4 on Lap 18 to put the race under caution, where it would remain until the conclusion of the first stage.