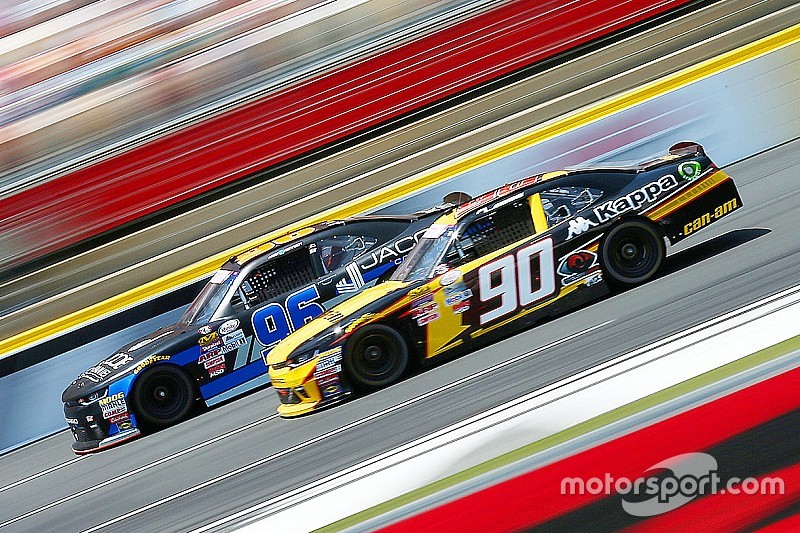 Labbé’s long-term objective is to contest the 2018 Daytona 500, and he has to prove to the NASCAR officials that he has the talent and the nerves to run at very high speeds in traffic on superspeedways.

Behind the wheel of the No. 90 Can-Am/Kappa Chevrolet, Labbé qualified 29th and crossed the line 33rd in the Hisense 4k TV 300 held this Saturday.

Labbé took advantage of the early yellows to make his way to 26th place. The Canadian seemed to be at ease on the tough 1.5-mile oval, and set his fastest lap time in the middle of Stage 1.

On the final restart with 20 laps to go, Labbé couldn’t benefit of speed in the middle lane and faded back to cross the first green/checkered flag in 31st position.

In Stage 2, the crew, led by crew chief Mario Gosselin asked his driver to stop several times in an effort to solve a vibration issue. The crew eventually found a broken lug nut stud on the left rear tire. Unfortunately, damage was done and Alex Labbé had lost eight laps to the current leader.

Despite this costly incident, Labbé finished the race 33rd without any damage on his race car. “Looking back at our weekend we had some really good highlights,” Labbé said after the race.

“Looking back at our weekend we had some really good highlights,” Labbé said after the race.

“Our goal coming here was still to get the approval to race at Daytona in 2018. Thursday, I moved up from 40th to 25th into the final practice and I qualified 29th this morning for the Hisense 4K TV 300, which is an outstanding result for our small team. I couldn’t be more thankful to my sponsor Can-Am/Kappa/Cyclops Gear for the golden opportunity they are giving me. It’s unfortunate that I couldn’t get a better finish, but there is not much you can do with a broken lug nut stud, it’s part of racing. Now I will move on to my second race of the season in the NASCAR Pinty’s Series in Delaware next Saturday.”

Gase calls out Gallagher after practice collision and confrontation