After two green-white-checker attempts on Saturday, Justin Allgaier powered his No. 31 Turner Motorsports Chevrolet past the No. 22 Penske Racing Dodge of then-leader Jacques Villeneuve on the final lap to claim the win in the NAPA Auto Parts 200 NASCAR Nationwide Series race at Circuit Gilles Villeneuve in Montreal.

"I didn't breathe the whole lap," Allgaier said in victory lane of his last-lap run to the checkered flag.

I didn't breathe the whole lap.

Sam Hornish Jr. also got his No. 12 Penske Racing Dodge past Villeneuve on the final lap to claim runner-up honors. Villeneuve finished third to give Penske two spots inside the top-three.

Several drivers who finished near the front played a fuel mileage game, with Villeneuve being the one who ran the most laps on his final tank of fuel. He last pitted on lap 45 of the 74-lap event.

"I thought he was out of fuel, because he was so slow," Allgaier said of his late-race pass.

Pit strategies varied throughout the race, with some drivers like Sadler heading down pit road within the first couple of laps of the race to top off with fuel. Others, like Villeneuve and Hornish, waited until the caution came out on lap 18 to make their first pit stops.

Hornish and Villeneuve both led laps early, but Danica Patrick got to the front in her No. 7 JR Motorsports Chevrolet on the restart following the first caution. Patrick went on to lead 20 laps before mechanical issues after running over a shoe that was thrown onto the track around lap 40 resulted in several pit stops and eventually a trip to the garage. 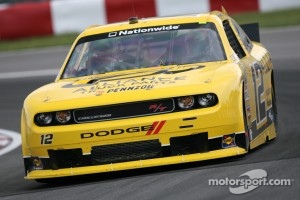 Villeneuve resumed the lead on lap 41, but he lost that lead due to varying pit strategies when the next caution came out for debris on lap 45. Sadler, Allgaier and a few other drivers stayed out to gain track position, but by lap 52, Villeneuve, who pitted, worked his way back up to second spot.

Sadler headed down pit road under green on lap 52, handing the lead back over to Villeneuve. Villeneuve, who stayed out and moved back into the lead. Villeneuve continued to lead until he was passed by Alex Tagliani in the No. 30 Turner Motorsports on a restart following a caution with 15 laps to go.

Hornish was involved in two separate incidents in the closing stages of the race, first with the No. 18 Joe Gibbs Racing Toyota of Michael McDowell right after a restart following a caution with 15 laps to go, and then with Patrick on lap 64. The race remained green both times.

"Prior to that caution where we got spun out, I thought we had something for them," Hornish said. "We had a winning race car."

The yellow flag did wave again, though, when Villeneuve made contact with Tagliani, sending Tagliani into a spin to retake the lead with eight laps to go. 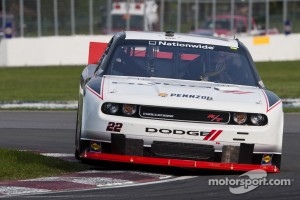 "Man, how crazy these things turn out," Allgaier's crew chief Jimmy Elledge said after the race. "It's awesome."