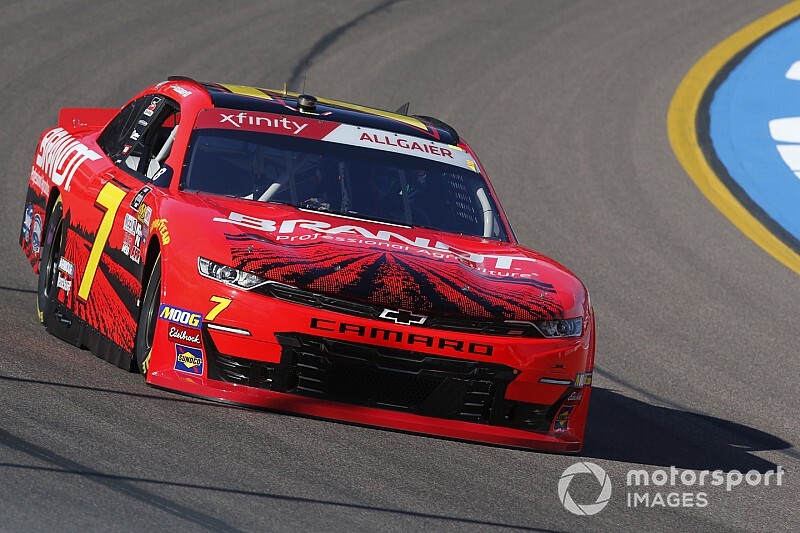 The timing couldn’t be better for Justin Allgaier, who picked up his elusive first NASCAR Xfinity Series win of the season on Saturday.

Allgaier grabbed the lead from Chase Briscoe on Lap 135 of 200 and held on the final 66 laps to win the Desert Diamond Casino 200 at ISM Raceway near Phoenix.

The win is Allgaier’s first since September last season at Indianapolis and ensures he’s one of the four drivers who will compete for the series championship next weekend at Homestead. It’s also the 11th win of Allgaier’s career.

“It’s incredible, man. This helmet right here, it’s the first time I’ve won with (daughter) Harper’s helmet in the car and it means a lot,” Allgaier said. “To do what we’ve done all year, to have the speed that we’ve had and not be able to pull it off has been disappointing and we’ve kind of rallied behind it.

“We said to win a championship, we needed to come here and get a win to get to Homestead and we did that. We had a hot rod today. I don’t think we could have beat (Bell) but when he made his mistake, we capitalized on it.

Asked about the chance to compete for a championship, Allgaier said, “Not only a chance at a championship but also the momentum from a win, that’s special. No question not winning is a weight on your shoulders, man, you can’t even begin to describe it.”

Custer finished second in the race and was able to noticeably close the distance to Allgaier in the final five laps. “I needed about five more,” Custer said after the race.

While trying to recover from a pit road speeding penalty, Bell spun on the backstretch on Lap 116 to bring out a caution.

Most of the lead-lap cars elected to pit but Jeremy Clements stayed out and inherited the lead. On the restart on Lap 122, Clements was followed by Briscoe, Annett, Brandon Jones and Cindric.

Briscoe powered to lead shortly after the restart as Jones moved into second.

On Lap 133, Allgaier got around Jones and moved into the second position and began setting his sights on Briscoe.

Allgaier went to the inside of Briscoe on Lap 135 to move into the lead as Reddick passed Briscoe to take second.

With 50 laps to go, Allgaier maintained a small but steady lead over Reddick with Custer running in third.

After 175 laps, Allgaier had expanded his lead to more than 2.7 seconds over Custer, with Reddick running third and Briscoe fourth.

With 10 laps remaining, Allgaier still had an almost 2-second lead over Custer but there were concerns whether he could make it to the finish on fuel.

Bell easily held off Allgaier to in Stage 2, his 22nd stage victory of the 2019 season.

Following the break between Stages 1 and 2, all of the lead-lap cars elected to pit with Bell the first off pit road.

On the restart on Lap 54, Bell was followed by Custer, Reddick and Allgaier.

With 30 laps remaining in the second stage, Bell remained a small but steady lead over Allgaier while Custer had moved back up into the third spot.

With five laps to go, Bell had built a more than 1.3-second lead over Allgaier as Custer remained in third, more than 4 seconds behind the leader.

Bell cruised to the Stage 1 victory, leading all 45 laps.

Bell, who started on the pole, took command early leading the first 13 laps.

On Lap 14, Riley Herbst spun in Turn 3 after contact with Annett to bring out the first caution of the race.

Bell remained in the lead on the restart on Lap 19, followed by Custer and Reddick.

With 20 laps remaining in the first stage, Bell had built up a 1.7-second lead over Allgaier with Custer running in third.

With five laps to go, Bell’s lead had expanded to more than 2.7 seconds over Allgaier. Custer remained third, 3.2 seconds behind the leader.