Almirola declared Daytona winner after review of the finish 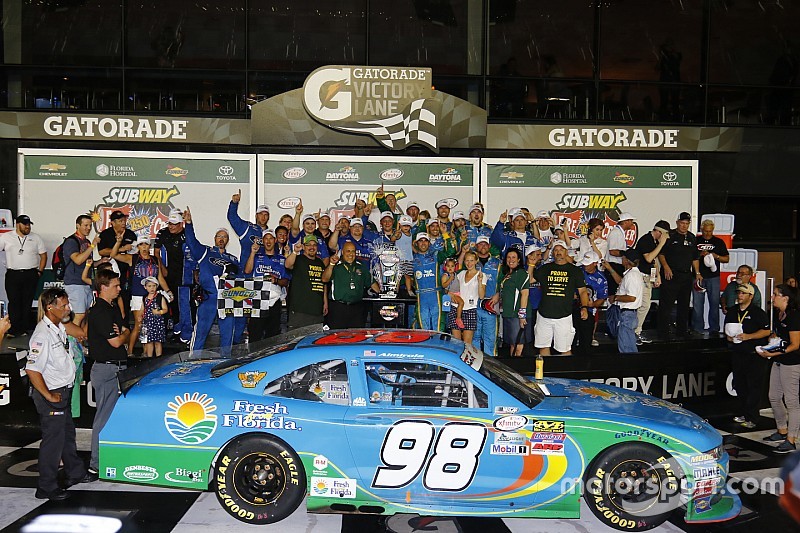 Although Almirola’s name is on the trophy from the 2007 AT&T 250 at the Milwaukee Mile, he only started the race. It was Denny Hamlin that drove the car to victory that day after he was delayed en route to the race from Sonoma.

On Friday night at Daytona International Speedway, Almirola won the Subway Firecracker 250 in a photo finish over Justin Allgaier.

“It was close, it was really close,” said Almirola, who also earned his first Sprint Cup win at this track in 2014. “I had a good push from the 18 (polesitter, David Ragan). I tried to side draft the 7 (Allgaier) the best I could to try to stay in front of him. I knew they wrecked behind us and I was like, ‘When are they going to throw the caution?’ because I was in front of him.”

The Tampa native started 23rd in the No. 98 Fresh From Florida Ford and was scored with just leading the final lap.

“It’s so cool,” Almirola said. “What a season we’ve had. We’ve had a horrible season on the Cup side. Things just haven't gone our way. But I’m so glad to be in Victory Lane. It’s such a special place for me. I won my first Cup race here two years ago, but for me, this is my first Xfinity win. I know I have a win, but there’s always been that asterisk next to it. But I’ve been dying to get back to Victory Lane in an Xfinity car so I can say I’ve won in all three series without that asterisk by my name.”

Allgaier, who acknowledged the loss “will hurt for a while,” was scored second followed by Ryan Sieg, Joey Logano and Brendan Gaughan. Logano’s 46 lap led were the most throughout the race.

The race was slowed by eight caution, the first occurred on Lap 10 after Scott Legasse Jr. turned Mario Gosselin and collected Ray Black Jr., Alex Guenette and J.J. Yeley in the process.

After the field completed Lap 14, Brennan Poole triggered the second caution after he punted Darrell Wallace Jr., who was running third at the time of the accident. Twelve additional cars received damage including point leader Daniel Suarez and Brandon Jones, who entered the race fifth in the NXS standings.

NASCAR red-flagged the race at the 21:30 mark to clean oil and debris on the backstretch. The race was delayed for 7:40. The second caution also served as the competition caution.

Although the race restarted on Lap 21, the third caution occurred two laps later when Erik Jones blew a right rear tire. Jones, who received damaged in the big one, reported a tire rub on the No. 20 Toyota before the race returned to green. Jones, 20, has endured his share of challenges this season with two wins, six poles and two DNFs. He recovered to finish 10th.

Ryan Preece’s engine blew to ignite the fourth caution. Preece was running in the top 20 before his night ended after 42 laps.

Logano lost the lead on pit road to Brendan Gaughan, who only stopped for fuel on Lap 44 when the leaders pit. Logano, who restarted third on Lap 47, passed Gaughan on the outside down the back stretch and regained the point on Lap 48. But on the next lap, Suarez bounced off of Ross Chastain and slammed nose-first into the SAFER barrier on the back stretch, finishing 32nd.

Several cars topped off for fuel before Logano led the field to green on Lap 54. With 35 laps remaining, Logano was single-file with Almirola, Ty Dillon, Ragan and Ryan Sieg in tow. One lap later, Ryan Ellis blew a right rear tire to trigger the sixth caution.

With 29 laps remaining, Allgaier held the point but was passed by Elliott Sadler one lap later. The JR Motorsports Chevy led for one lap before Logano regained the lead — but it was short-lived as Sadler received an assist from Almirola. Sadler was in command by Lap 75 with Almirola, Logano, Jones, Wallace and Allgaier in the inside line with the field double-wide behind.

The fight to the finish

On Lap 80, Logano pulled out of the conga line. With a push from Chase Elliott, Logano took the lead but when he tried to block the field, the No. 88 passed him with 18 laps remaining. Elliott extended his advantage with a push by his JRM teammate Sadler followed by Almirola, Jones and Wallace as Logano dropped to 10th. Almirola held the point momentarily on Lap 87 until Ragan passed on the outside then dropped to the inside lane.

The front six cars — Ragan, Almirola, Sadler, Jones, Wallace and Allgaier — broke away from the pack with four laps remaining. As they entered Turn 4, David Starr got loose and slid into Poole and collected Benny Gordon to bring out the yellow for the seventh time, sending the race into overtime.

Although Ragan led the field to green one last time, he was shuffled out and Almirola, initially was pushed by Allgaier, ended up side-by-side battling for the win as several in the field crashed behind them. Although scoring showed Allgaier ahead by 0.011-second, it was Almirola with the win upon review.

"When my spotter told me that they were wrecking behind me I was ahead of the (No.) 7 and I knew it,” Almirola said. "Then he started to get a run on me and he was saying there was still no caution and I was like, ‘Are you kidding me?’ I kept side drafting just in case they were going to throw the caution because I wanted to make sure I was ahead of him. They threw it and I felt like we were door to door and didn’t know who would be called the winner.”

“That last run there, I knew they were crashing behind us and I was going to have to pull to the outside of Aric and didn’t quite pull it off,” Allgaier said. “Congrats to Aric. A huge thanks to everyone who works on these cars back at the shop."

“A tough night. Ultimately, when you’re disappointed with second it’s a good day.”

NASCAR's Chevrolet Camaro to have a new look for 2017