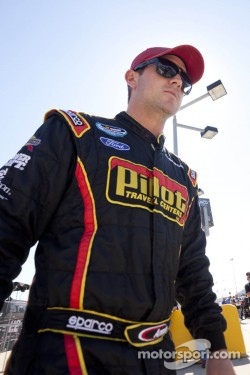 The 26-year-old driver made eight starts at the famed, 2.5-mile race track and collected two top-10 finishes, including a third-place finish, his career-best, in the July event last season. Saturday's 400-mile event will give Annett his first opportunity to meet this season's goal to get to victory lane.

Fans will have the opportunity to see Annett at the Ford Display in the Midway area Saturday, February 23 when Annett stops by for a 15-minute question and answer session at 11 a.m.

"We had a lot of momentum last year and were very consistent in our performance and finishes. This year, we are looking to win. If we can win some races, we will be right there in the chase for the championship. The competition this year is very high which makes it even more important for our team to stay consistent but also win races. I have great chemistry with Philippe and the guys, so I think we can battle with the best of them.

"We had a third-place finish last summer and were running well in the season opening event before we got caught up in a late-race incident. I feel really good about our Daytona program and think that will show on the track on Saturday. I'm looking forward to starting the season with pretty much the same guys. I think that will definitely help us start off on the right foot."

"We were really happy with our third-place finish last year with this car and over the off-season, have rebuilt the chassis exactly like we had last July. With Daytona, at the end of the day, it is in the driver's hands. Michael is very good at drafting, so I'm confident in our performance for our first race this season. Our team has stayed intact over the off-season, which will help us hit the ground running when we get to Daytona."

The No. 43 team has prepared chassis No. 641 for Daytona. This car last ran at Daytona International Speedway in July where the team finished in the third position.