Annett maintains his position in the points after Richmond 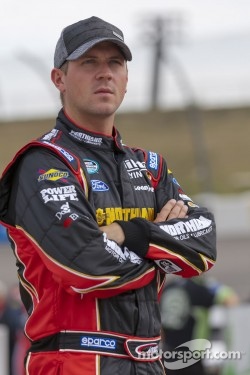 Race Summary: Starting the Virginia 529 College Savings 250 at Richmond International Raceway from the 13th position, Annett slipped back one spot in the early laps of the race and remained there until the first caution flag of the night flew on Lap 38. Prior to the yellow flag waving, Annett communicated to the crew that the car was loose on entry and exit of the corners. Crew Chief Philippe Lopez elected to bring the Pilot Flying J Ford onto pit road for four tires, fuel, and trackbar and air pressure adjustments under caution. The lightning quick stop allowed Annett to gain one position in the pits and he restarted in 13th.

Shortly after pitting, Annett relayed to the team that the changes made on the previous stop had not helped his car and that he need more drastic changes during the next stop. Running in the 17th position at Lap 96, the Iowa native was fighting a car that was loose in, tight in the middle and loose off. Having his hands full with an ill handling car, Annett was just trying to maintain his track position until his next scheduled pit stop of the night. A Lap 111 caution allowed Annett to come into the pits for four tires, fuel and trackbar, air pressure and wedge adjustments in an attempt to remedy the cars handling issues.

Restarting in the 16th position, Annett quickly began to make his way toward the front of the field and was running in 11th at Lap 143. After gaining five spots, Annett let his team know that the changes made to the Pilot Flying J Ford on the previous stop had helped the handling of his car tremendously.

The third caution flag of the day flew on Lap 144, and Annett keyed the mic to let his crew know the car was still a bit loose in and he was having trouble arcing into the corners. Lopez called for more air pressure, wedge and trackbar adjustments under caution. Annett’s pit crew allowed him to gain one spot on pit road and he came out to take the green flag in 10th. Running lap times comparable to the leader, Annett quickly gained two more positions and was running in eighth at Lap 179.

The Pilot Flying J car continued to run inside the top-10 when they made their fourth and final pit stop of the day on Lap 187. With no major handling complaints from the driver, Lopez elected not to make any chassis adjustments and the pit crew bolted on four fresh tires and added fuel to the No. 43 machine. Having fast pit stops all night, the pit crew again gained ground for Annett in the pits and he restarted seventh with just over 50 laps remaining.

Just two laps after the restart, Annett drove to fourth and remained inside the top five until the seventh and final caution flag of the night flew on Lap 229 for an accident on the frontstretch. Having already used all their sets of tires for the night, there was no reason for Annett to come into the pits and he restated in fifth at Lap 233. Unable to jump in line when the green flag flew, the driver of the No. 43 slipped back one position.

Determined to get his fifth top-five finish of the season, Annett was able to regain the fifth spot on Lap 238. Though he had secured fifth, the remaining 12 laps would prove to be anything but easy as Annett had a hard charging Austin Dillon to hold at bay. Refusing to fall outside of the top five, Annett was able to hold on to the fifth position until he took the checkered flag at Lap 250.

Annett’s fifth-place effort marks his fifth top-five and 11th top-10 finish of the season. Friday night’s stellar finish also allowed Annett to maintain his position in the NASCAR Nationwide Series point standings, and he sits in sixth spot heading into next weekend’s race at Chicagoland Speedway.

Annett’s Thoughts After the Race: “It was a good night. After practice I really thought tonight was going to be on the easier side actually. I thought we would run top-10 and get a top-five with ease because our car was so good in practice. The race started and we were completely the other way and I thought, ‘Oh no, what are we going to do?’

It took two or three pit stops to really get the car to where I could be aggressive and here you can’t finesse this track. You have to be aggressive and dive bomb the corner and have grip off and move guys out of the way.

To do that you have to have real good grip and we didn’t have that until about the last 100 laps, but when we got it we definitely used it up and brought home another top-five for this Pilot Flying J team. We have a lot of good tracks coming up, so hopefully we can keep getting top-fives and get a win before the year is out.”