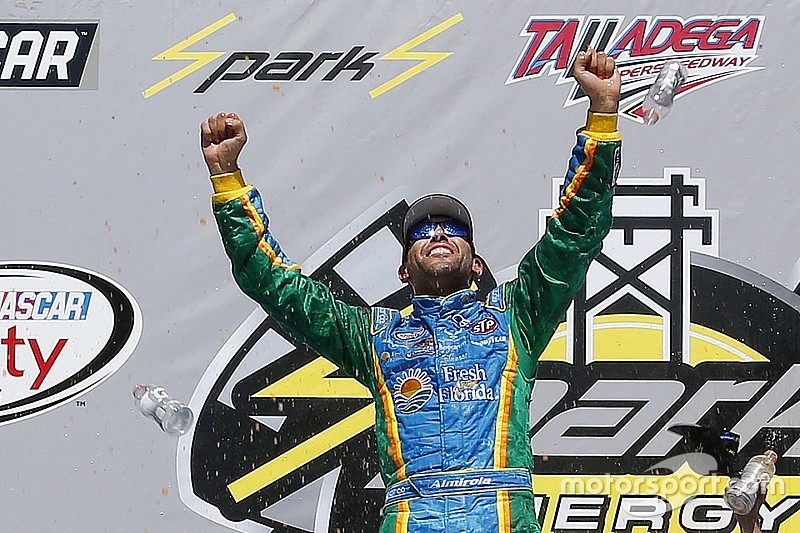 Aric Almirola charged to the lead with two of 113 laps remaining at Talladega (Ala.) Superspeedway and held on for his third career NASCAR Xfinity Series victory.

The race lead of Saturday’s Sparks Energy 300 changed three times in the final 10 laps but Almirola was able to stave off series points leader Elliott Sadler to claim his first series win of the season.

The win is just the third for Biagi DenBeste Racing since 2004, the last two have come with Almirola at the wheel (he also won last season at Daytona).

“This means so much. I want to thank everyone at the Biagi DenBeste team – they let me run this thing seven or eight times a year and I have so much fun,” Almirola said from Victory Lane. “Our car was super-fast.

“I knew it right from the beginning of practice. We ran about 10 laps in practice and I said, ‘Put it on the jack stands, we’re ready to go. This thing is fast.’ ”

On his move to the front with two to go, Almirola said, “It was tough, I wasn’t sure whether I wanted to go early or not. But I waited for my shot and took it.”

On the final lap, there were at least two cars that experienced issues but NASCAR declined to throw the caution as the cars quickly made their way off the racing surface and out of danger.

During a caution for debris on the track with 16 to go, Kasey Kahne – who dominated much of the race – was penalized by NASCAR for pitting outside his pit box and was held a lap. He ended up finishing 15th.

Justin Allgaier claimed the Stage 2 victory under caution as another multi-car wreck erupted on the final lap of the 25-lap segment.

Almirola made contact with Ryan Reed which triggered an eight-car wreck and sent the race under its second red flag once the Stage was completed under caution.

“We’ve got a great car. I’m just really proud of everyone back at JR Motorsports,” Allgaier said over his team radio during the break. “We have a car that really runs well no matter what lane we run in.

“This has been a lot of fun behind the wheel.”

Reed was not pleased with Almirola over the incident.

“We learn from (Cup drivers) and there are a lot of great things, and I actually think a lot of Aric. I have a lot of respect for him as a driver and as a person, but that just wasn’t cool,” Reed said.

“All he had to do was back off a little bit. He just got so aggressive with that push and then didn’t hit us square. He hit us off to the right side and when that happened the car was out from underneath me before I knew it.”

Brendan Gaughan, who was briefly contending for the win, was among those who were knocked out of the race following the Stage 2 incident.

“We were running for the Stage win and it’s just restrictor-plate racing. Sometimes it’s just not in your control,” he said.

Almirola held off Logano on a two-lap restart to claim the Stage 1 victory.

With four laps remaining in the first 25-lap segment, Brennan Poole got dropped out of the draft and caught alone in the middle lane. He moved to the right and into two cars running the outside lane.

“Freakin’ No. 48 (Poole) caused that whole thing,” Byron said over his team radio.

The race was stopped nearly 10 minutes to clean the track of debris. During pit stops after the wreck, Kennedy – who led early in the segment – was penalized for removing equipment from his pit box.