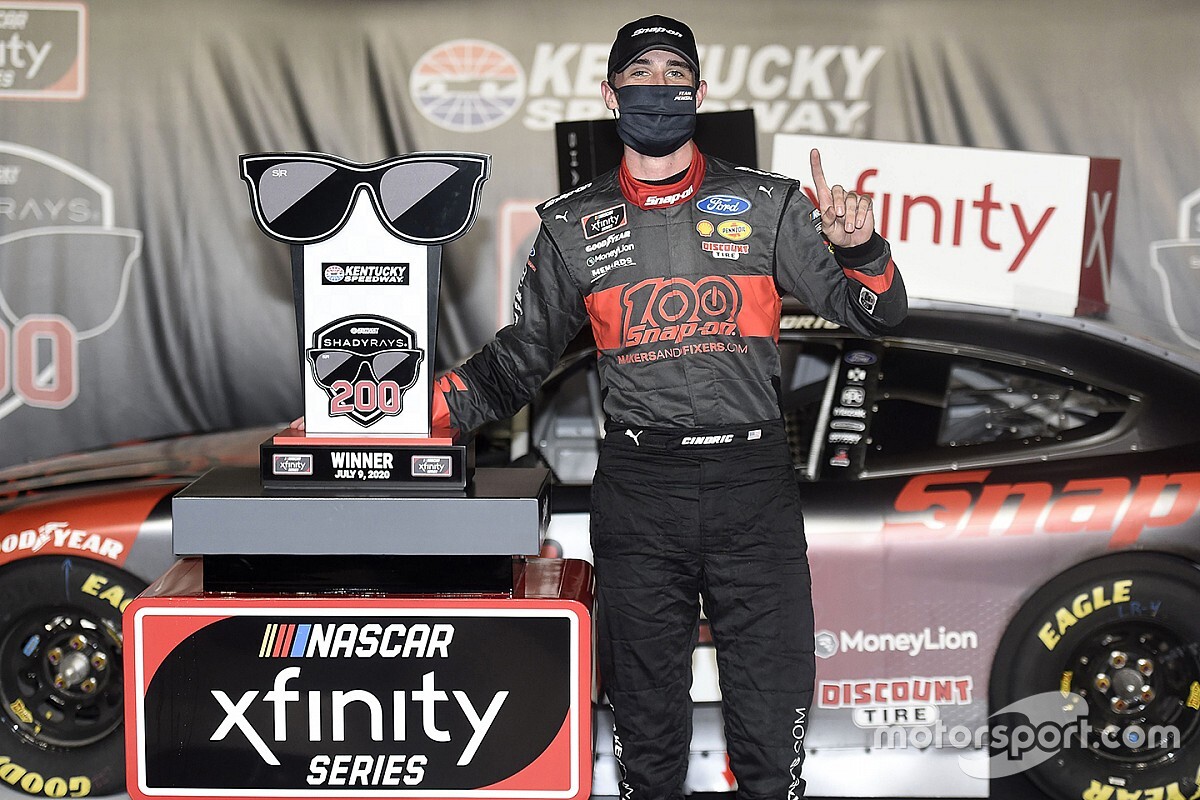 Austin Cindric hangs on in an overtime restart to claim the checkered flag for Team Penske in the first of two NASCAR Xfinity Series races at Kentucky Speedway this weekend.

Cindric's win is the third of his NXS career and his first on an oval.

“I don’t care what shape the track is -- if it’s dirt, oval, I don’t care," he told FS1. "I’m just so happy this Snap-On Ford Mustang is in Victory Lane.  We’ve come so close all year.  These guys have given me so many awesome race-winning cars.

"With Snap-On celebrating their 100th anniversary it’s awesome to have them on the car.  These cars don’t get built without Snap-On tools, so I’m pumped. This is awesome. I’d love to be able to come back into another performance like that tomorrow night, but all the credit to my guys for getting me here.”

The race ended under caution after a vicious last-lap crash involving Justin Allgaier, Ronnie Bassett Jr. and Timmy Hill. Both Bassett and Hill were treated and released from the infield care center, but Allgaier has been transported to a local hospital for further evaluation.

Gragson held the lead through pit stops following the second stage while Cindric fell to fourth.

The race went back green on Lap 68. Gragson led Cindric, who remained in hot pursuit as they navigated traffic throughout the run.

On Lap 89, Brandon Brown collided with Justin Haley and spun, damaging the rear-end.

As it was within the fuel window, the entire field filed down pit road for fresh rubber and to fill up. Haley and Clements won the race off pit road with two-tire calls.

Chastain was sent to the rear after being nabbed for speeding on pit road.

The race resumed with 40 laps to go. Cindric quickly moved into the race lead as Gragson fell back after being caught on the bottom.

Chastain was trying to work his way back through the field and got together with Moffitt. Both cars went for a half-spin and brought out the yellow flag.

Cindric led the field back to the green flag with 27 laps to go. Haley briefly reclaimed the lead, but it didn’t last as Cindric and Briscoe moved by.

With 14 laps to go, Colby Howard went spinning and collided with tire barriers that line the inside of the track. He showed his displeasure with Alfredo a hand gesture before climbing into the ambulance.

The race became a nine-lap shootout. Brsicoe nearly cleared Cindric but couldn’t get it done.

Soon after, Harrison Burton went spinning and the race became a two-lap dash as the event went into overtime.

The restart was hectic as Gragson shot up the track into his teammate Allgaier. A crash was avoided, but Cindric was able to get away as Briscoe fell back.

On the final lap, Allgaier collided with Ronnie Bassett Jr. in a vicious crash that collected Timmy Hill and ended the race. Bassett's car even went airborne for a brief moment.

Cindric would take the checkered flag along with the yellow ahead of Herbst and Chastain.

Gragson dropped down to 11th after the final restart problems in a disappointing end to what started off as a stellar showing.

Before the green flag, Alfredo was battling issues with the steering column, but it was resolved and they were able to start the event.

As the race got underway, Jeb Burton spun while battling Ross Chastain for second into Turn 1, spinning up the track and collecting Brandon Jones.

The race resumed on Lap 8 with Gragson leading Chastain, who fell back after battling a twitchy-loose car.

As Austin Cindric challenged Gragson for the lead, the planned competition caution flew on Lap 15.

Chase Briscoe took the opportunity to pit from inside the top-five, leading a handful of drivers down pit road.

Cindric closed in on Gragson again and even made a move for the lead entering Turn 3, but could not make it stick and fell back. He then got into a heated battle with Chastain before settling in third.

No change for the top-five off pit road. Briscoe, who pitted during the earlier competition caution, stayed out and controlled the restart. Burton fell to the rear of the field after he was assessed an uncontrolled tire penalty.

The race resumed on Lap 38 and Gragson quickly took back the race lead. Briscoe held on to second for some time before Cindric got around him, but he was unable to track down the JR Motorsports driver.