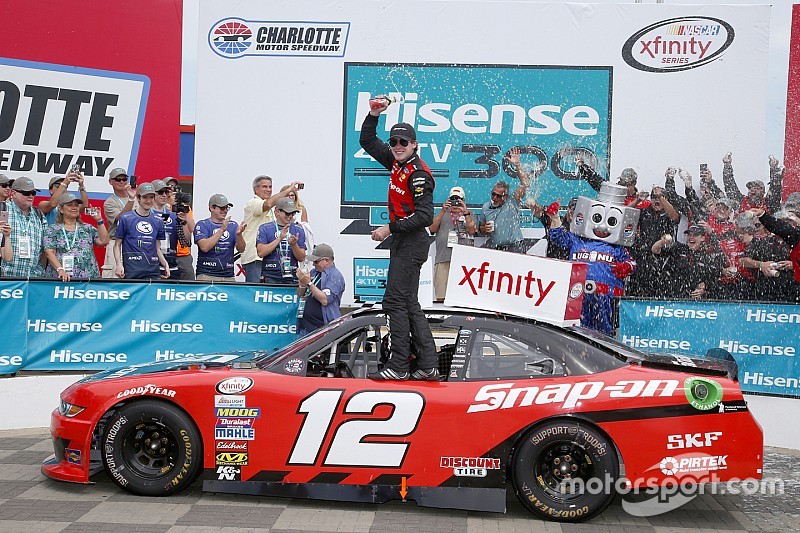 Blaney, who competes full-time now in the Monster Energy NASCAR Cup Series, cleared Kevin Harvick on a restart with three of 200 laps remaining and held him off to win Saturday’s Hisense 300 Xfinity Series race at Charlotte Motor Speedway.

The win is Blaney’s first series win of the year and first in any NASCAR competition since his victory at Kentucky in September 2015.

Blaney had to start the race from the rear of the field after NASCAR penalized his No. 12 Team Penske team for making adjustments to his car after it was impounded this morning following qualifying.

“It was really tough. We kept having tons and tons of cautions,” Blaney said in Victory Lane. “We lost the lead on a pit stop when we kind of got blocked in and I wasn’t sure I was going to get a shot at it.

“It worked out where we could put ourselves in position to get the win and we capitalized on it. Everybody did a great job.”

Asked if he could have done anything different on the final restart, Harvick said, “If I could go back, I’d probably do something different. Ryan had the best car – he’s the one who helped us get the lead (earlier). He was just able to get through (Turns) 1 and 2 there.

“I felt like if I let (Blaney) and (Brad Keselowski) get paired up on the top (line on the restart), I’d be in double-trouble.”

Elliott Sadler, who entered the race as the series points leader, wrecked with 20 to go and ended up finishing 35th.

Blaney took the lead on a restart on Lap 53 and easily held off Hamlin to win the second 45-lap segment. Blaney led 37 of the 45 laps.

Austin Dillon, rebounded from his early-race penalty, to finished third, Brennan Poole was fourth and Cole Custer rounded out the top-five.

“We’re really good and I thought we made it a little bit better in the second run,” Blaney said over his radio. “It’s been a fun race so far.”

JR Motorsports, which entered the weekend holding the top three spots in the series standings, struggled through the first two segments. At the conclusion of the Stage 2, William Byron was the top-performing driver, in 11th.

“We need to try something big,” fellow JRM driver Sadler told his crew over his radio at the break.

Harvick took command early in the first 45-lap segment and cruised to an easy win in Stage 1 over Hamlin.

Harvick’s teammate Saturday at Stewart-Haas Racing, Custer, ended up third in the segment, Blaney was fourth and Poole was fifth.

Austin Dillon was black-flagged at the start of the race for a restart violation and almost immediately afterward, Bell – making his first series start – spun on the frontstretch to bring out the race’s first caution.

Dillon had to restart the race from the rear of the field. Daniel Hemric also received some damage in the incident.

Five things to watch in Saturday's Xfinity race at Charlotte