Brad Keselowski dominated the Boyd Gaming 300 NASCAR Nationwide Series race at Las Vegas Motor Speedway on Saturday, leading 144 laps of the 200 that made up the event with his No. 22 Team Penske Ford en route to his first-career series win at the track.

"We found every way we could to make it hard," Keselowski said.. "These races aren't getting easier to win. I drove as hard as I could every lap."

Issues Keselowski had to overcome included sliding through his pit stall during a lap 148-caution and his alternator breaking with about 40 laps remaining, requiring him to keep an eye on the voltage meter as he finished the race on battery power. 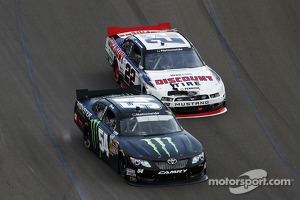 As Keselowski ran up front after taking the lead from pole sitter Ty Dillon, driver of the No. 3 Richard Childress Racing Chevrolet, on lap seven, Busch was making his way toward the front. Despite qualifying in the top-10, Busch started in the back in a back-up car after his team replaced a frayed alternator belt during the impound period after qualifying. By lap 12, Busch was in the top-10; by lap 36, he was in the top-five. Busch was up to second by the restart that followed the first caution of the race on lap 56.

Busch got the lead from Keselowski during a cycle of green-flag pit stops that started around lap 114 and continued to run up front until Keselowski retook the top spot on a restart that followed a caution that came out with 42 laps remaining. It was a caution brought out by Kenseth, who spun while racing Busch for the lead.

"I don't know what caused us to lose the lead," Busch said. "That was unfortunate. That cost us the race."

The No. 9 JR Motorsports Chevrolet of Chase Elliott did replace Busch in the second position, temporarily, just before the final yellow flag of the race with 37 laps to go, but when the race restarted, Busch reassumed his position of second. In the closing laps, he was gaining on Keselowski, but was unable to catch him and make the pass.

Dale Earnhardt Jr. finished fourth in the No. 88 JR Motorsports Chevrolet. Elliott was the highest-finishing Nationwide championship-eligible driver in fifth.

"It was a lot of fun (racing among Sprint Cup regulars)," Elliott said. "Biggest thing for us, it gives us a mindset that we can run up front." Kenseth wound up sixth, the No. 2 Richard Childress Racing Chevrolet of Brian Scott was seventh, the No. 6 Roush Fenway Racing Ford of Trevor Bayne eighth, the No. 60 Roush Fenway Racing Ford of Chris Buescher ninth, and the No. 7 JR Motorsports Chevrolet of Series points leader Regan Smith rounded out the top-10. Smith was running fifth with four laps remaining before making contact with the retaining wall. Only 10 cars finished on the lead lap. Pole sitter Dillon fell off the lead lap with two pit road speeding penalties and was the first driver one lap down at the finish, taking 11th.