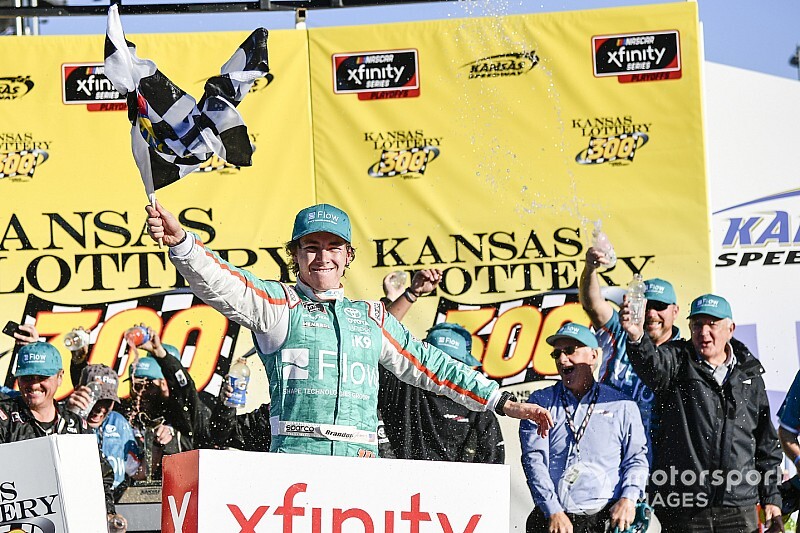 With playoff contenders battling for the lead Cole Custer and Tyler Reddick, Jones took the field four-wide following a restart on Lap 191 of 200 and grabbed the lead for the first time in the race.

He held off the field on another restart and challenges from Chase Briscoe and Reddick on the final lap to come away with the win in Saturday’s Kansas Lottery 300.

The win is Jones’ first in 177 career starts in the NASCAR Xfinity and Truck series. He has won races in ARCA and K&N Pro Series East.

"I knew this was going to happen. I knew we would get to this race track, did not advance in the playoffs and have a shot to go to the final round, but I'm super-excited, man," Jones said after the race. "This team has been through hell and back with me for a couple years now.

"I can't believe we pulled this off today."

Asked what was going through his mind on the final laps, Jones said, “I’m not going to lie about this. My foot was literally shaking on the accelerator on that last lap. I’m not even sure if I was wide open at the time, when I was doing it.

"There was a lot of nerves. A lot of emotion going through my mind, but I saw it coming and got pretty pumped.”

After the race, Custer tried to approach Reddick on pit road to talk to him about an incident on the track but it turned into a physical confrontation, first between the drivers and then crew members.

Reddick ended up finishing second in the race, Briscoe third, Michael Annett was fourth and Justin Allgaier rounded out the top-five.

On Lap 146, Annett hit the wall to bring out a caution just as Reddick began his green-flag pit stop. All of the lead-lap cars elected to pit with Custer the first off pit road.

When the race returned to green on Lap 152, Custer was followed by Briscoe, Christopher Bell, Ross Chastain and Justin Haley.

Just after the restart, Briscoe rocketed to the lead while Custer fell off the pace after contact from Haley.

With 40 laps remaining in the race, Briscoe held a small lead over Bell with Reddick running third.

John Hunter Nemechek spun off Turn 2 on Lap 164 to bring out another caution. Most of the lead-lap cars elected to pit but Annett stayed out and inherited the lead.

When the race went green on Lap 169, Annett was followed by Briscoe, Reddick, Bell, Chastain and Jones. Briscoe quickly powered back into the lead.

With 25 laps to go, Custer used a three-wide move to take third as Briscoe and Bell continued to run first and second.

On Lap 185, Garrett Smithley moved up the track in front of leader Briscoe. Briscoe hit Smithley and Bell ran into back of Briscoe, doing serious damage to both of the race cars.

Both Briscoe and Bell had to pit for repairs, which handed the lead over to Custer. The race returned to green on Lap 191 with Custer out front, followed by Reddick, Jones, Noah Gragson and Haley.

On the restart, Custer got into the wall as the field went four-wide and Jones moved into the lead for the first time.

Gragson and Joey Gase hit the wall on Lap 192 to bring out another caution. Jones continued to lead when the race returned to green on Lap 196.

Custer held off a stiff challenge from Bell to take the Stage 2 victory.

Reddick was third, Allgaier fourth and Briscoe ended up fifth.

Following the break between Stages 1 and 2, all of the lead-lap cars elected to pit with Bell the first off pit road. On the restart on Lap 52, Bell was followed by Custer, Reddick, Allgaier and Briscoe.

On Lap 54, Chastain moved up to the third spot and began challenging Custer for second.

After 60 laps, Custer had closed the gap on Bell and began working him over trying to make a pass for the lead. Chastain remained in third.

On Lap 63, Custer went to the outside of Bell and grabbed the lead for the first time in the race. Reddick then got around Chastain to move into third.

Harrison Burton spun in Turns 3 and 4 on Lap 70 after contact with Austin Cindric to bring out another caution. The damage to Burton’s No. 18 Toyota was too extensive and he was forced to take his car to the garage.

A handful of cars elected to pit but on the restart on Lap 75, Custer continued to lead followed by Bell and Reddick.

On Lap 80, Cindric was forced to pit under green with a flat tire after contact with Nemechek on the track.

Cindric again pit under green with a tire issue on Lap 87.

Bell led all 45 laps on his way to the Stage 1 victory, easily holding off Custer.

Gragson was third, Reddick fourth and Allgaier rounded out the top-five.

Bell, who started on the pole, ran out to an early lead but the caution came out on Lap 4 when the engine in Ryan Truex’s No. 8 Chevrolet let go.

When the race returned to green on Lap 12, Bell was followed by Cindric, Reddick, Custer and Allgaier.

After 15 laps, Bell maintained a small lead over Custer as Gragson moved into third.

With 20 laps remaining in the first stage, Bell’s lead over Custer had expanded to 1-second as Gragson remained in third. Chastain was fourth and Reddick fifth.

Cindric pit on Lap 37 under green with what he believed to be a loose wheel. His team later confirmed the right-front tire did have a problem.