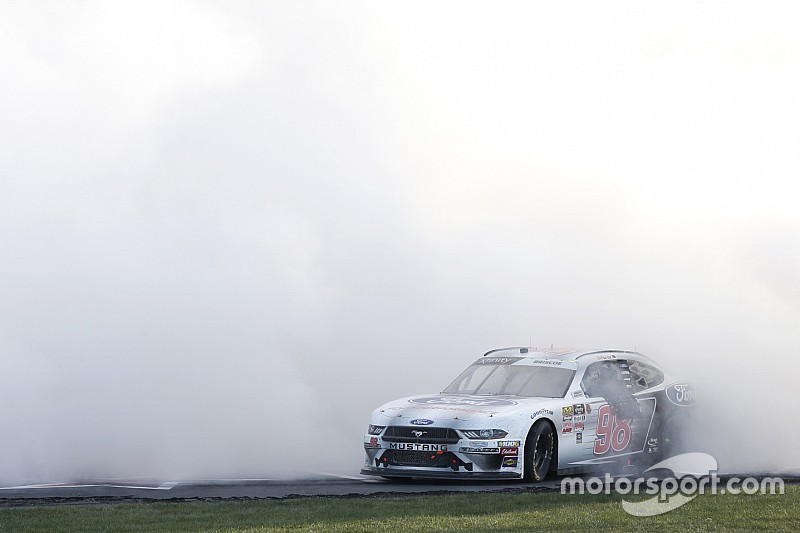 Chase Briscoe may be finding his groove at just the right time in the NASCAR Xfinity Series.

Briscoe picked up his first win of the season last weekend at Iowa Speedway, which has locked him into the series playoffs and his No. 98 Stewart-Haas Racing Ford team performance of late gives him hopes of challenging for a series championship.

“It was big. We weren’t the best car, obviously. (Christopher) Bell was the best car, but we were clearly the second-best car all day long. It definitely was a good confidence builder,” Briscoe said of his second career victory.

“It was good for our whole team. Our team is really, really young and inexperienced in some ways, so it was nice for them to prove to themselves that they could win as well and hopefully it was the perfect time.”

After dipping to 10th in the points standings following wrecking out of the July Daytona race with a 35th-place finish, Briscoe has rallied with three consecutive solid weekends.

He’s qualified ninth, fifth and second during the stretch which resulted in finishes of fifth, sixth and first, jumping to sixth in points.

The win comes at a good time, just as the Xfinity Series begins a stretch of three road course races in the next four weeks, beginning with Saturday’s Zippo 200 at Watkins Glen (N.Y.) International.

Briscoe, who has an extensive dirt racing background, did not consider himself a strong road course racer, but earned his first series victory last fall on the Charlotte Roval.

Now locked in the playoffs, Briscoe believes it frees his team to take bigger chances on race strategy, which can make or break a team in road races.

“These are the races where you can do more strategy than you can anywhere else and get out of the box,” he said. “Say we’re running fifth in a stage and the top four pit, we’re going to stay out and try to get a playoff point, whereas in the past we would have probably pitted with them.

“I think it’s perfect timing as far as strategy goes for these races and hopefully it’s a good confidence-builder for all involved.”

Briscoe, 24, credits the seat time that comes with running a full season with improving his performance in the Xfinity Series.

“The first part of the season I didn’t know what the car should be feeling like going into the race and just how much I could be aggressive in it and hustle it,” he said.

“I think as I get seat time and more experience it’s only gotten better and easier, so hopefully that will continue throughout the year.”

Asked if he thought his team was one that could make the Championship 4 at Homestead, Briscoe said: “Yeah, I think we’ve been in the conversation, honestly, the whole year. At the beginning of the year we were really good and ran six or so races in the top five consecutively. These last couple of weeks we’ve started to get our way back into that conversation.

“We’re still not that head-over-heels favorite, but I feel like we’re certainly a lot closer. We’ve been a lot more competitive throughout the weekend.”