Before the end of the night, the crew began to notice smoke coming from the rear of the No. 01 Chevy.

Mike Wallace and the No. 01 S.B. Ballard Construction Company team battled the competitors and the track on Friday night under the lights at Richmond International Raceway. Unfortunately, in the end a broken piston left the JD Motorsports team unable to finish the race resulting in a 33rd place finish.

The field took the green flag just after night fall with Mike Wallace rolling off from the 36th position. The veteran with 29 starts at Richmond began to make his way through the field but was slowed by a long caution and red flag at lap 40. 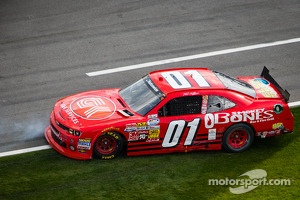 This allowed the team to come down pit road for tires, fuel, and most importantly adjustments. By lap 60, Wallace had the car into the top 30.

After a long green flag run that left the ill-handling car out on the track and in need of adjustments, the field slowed again for a series of cautions throughout the middle of the race.

The No. 01 team consistently rattled off 16 second pit stops keeping Wallace in the top 30. Before the end of the night, the crew began to notice smoke coming from the rear of the No. 01 Chevy.

Wallace radioed in that the car was losing power, forcing the team to come down pit road at lap 230 while running 27th.

The car was taken to the garage, but Wallace and the team did not want to give up. After trying to return to the track with the same issue, the team discovered an issue with the piston.

The engine woes contributed to a 33rd place finish, leaving the team in the precarious 30th spot in owner’s points.

Up next for the team is Talladega, a track where Wallace has experienced success in the past.

Mike Wallace: “Our car was tight all night. We were making little gains here and there, but then the engine went south. Our team is having a problem with a component in the engines and that is something we are looking at in the shop and trying to fix. I want to thank Steve and BJ Ballard for coming out tonight and supporting the team. Hopefully we can get the win next week at Talladega.