In the final race of the 2012 NASCAR Camping World Truck Series (NCWTS) season, Cale Gale and the No. 33 Rheem Chevrolet team visited victory lane at Homestead-Miami Speedway on Friday, Nov. 16. In a dramatic green-white-checkered finish, Gale, a rookie, edged Sprint Cup Series star Kyle Busch to the line to earn his first career win in a NASCAR race. Gale took the lead entering turn four on the final lap and held on to win the race by just fourteen-one-thousandths of a second. 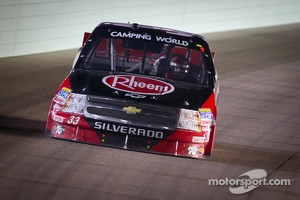 Making his first career start at the south Florida track, Gale turned his first lap at Homestead-Miami Speedway on Friday morning. With just a two-hour practice session to learn the circuit, Gale worked closely with crew chief Jerry Baxter and spotter Rick Carelli to develop his line around the racetrack and prepare for the afternoon qualifying session and the evening's race. By the end of practice, Gale posted the third quickest lap of the day, and backed up his time with the fifth-quickest lap during qualifying later that afternoon.

Gale rolled off fifth for the 201 miles of racing scheduled at Homestead-Miami Speedway on Friday night. At a track where tires quickly wear down, the Rheem team knew that tire management would play a big role in the season's final event and crew chief Jerry Baxter tried to plan a strategy that would capitalize on that standard.

Always taking four tires, Gale made four pit stops throughout the night working with only minor air pressure adjustments to fine-tune the handling of his truck and keep up with the cooling racetrack. The rookie contender maintained his position inside the top 10 all night and was running ninth when the caution flag waved on lap 126.

The Rheem team knew that sticker tires could make all the difference in the final eight laps and decided to make the bold call to bring Gale down pit road. With four sticker tires, Gale restarted the race in the 13th position for the final five laps. Gale picked up 12 positions to be scored in second-place as the caution flag waved again on lap 133.

With debris scattered across the race track, a 10 minute red flag prepared the field for a green-white-checkered finish. Gale restarted the race in the bottom groove with his No. 33 Rheem Chevrolet. After initially falling behind the leader, the rookie contender kept his concentration and continued to battle for position. Gale found himself side-by-side with the No. 18 of Kyle Busch as they came down the backstretch on the final lap and was able to pull ahead as they exited turn four. The duo made contact setting off sparks and smoke as they raced along the front stretch wall all the way to the checkered flag. When they crossed the line, Gale edged Busch by just fourteen-one-thousandths of a second.

"I've had a great opportunity with the No. 33 Rheem Chevrolet this year at Eddie Sharp Racing this season," commented an elated Cale Gale. "I'm just a racer from Mobile, Ala. that had a great sponsor in Rheem and a great team at Eddie Sharp Racing. I had never raced at Homestead-Miami Speedway before today, but it was a lot of fun. This is just a dream come true. I can't thank everyone enough for all their support; I'm excited to see what is in store for me next year."