Nine Canadian drivers turn out to race in home country

The NASCAR Nationwide Series heads north of the border this weekend for Saturday's running of the NAPA Auto Parts 200 at Circuit Gilles Villeneuve. As with any road course in the series, road course specialists, or "ringers," seem to come out of the woodwork. This weekend, several of these specialists give the Nationwide Series an international flavor -- or a home country flavor for series race fans in Canada. 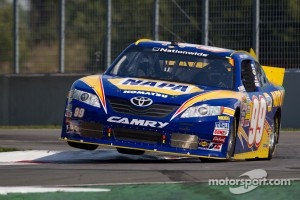 Patrick Carpentier bouncing over the kerbs in 2011

"It will be good to get back in the No. 22 Dodge Challenger this weekend, and even better that it will be at Circuit Gilles Villeneuve," Villeneuve said. "I always enjoy racing in front of the Montreal crowd, and it's going to be super touch and competitive as ever."

Even Patrick Carpentier is coming out of retirement to compete. He'll be behind the wheel of the No. 99 RAB Racing Toyota. Carpentier announced his retirement following the Montreal Nationwide Series race last year.

Nationwide Series experience is varied among this class of nine drivers. As a matter-of-fact, White hopes to make his series debut on Saturday, while Dumoulin and Stacey each only have one Nationwide start on their racing resumes. Meanwhile, Fellows and Carpentier have a wealth of series experience, considering neither has ever been a full-time driver in the series.

While Carpentier has 15 Nationwide starts under his belt, Fellows is the most experienced with 23 races, spanning 13 seasons. That could have something to do with why he's the most successful Canadian and most successful road course specialist to race in the series.

Aside from Fellows, the other eight Canadian drivers expected to be on hand in Montreal this weekend are winless in Nationwide Series action at the track named after Villeneuve's father, Gilles Villeneuve. Fellows, though, has four Nationwide Series wins to his credit, all coming on road courses. One of them even came in Montreal in 2008, driving the same No. 5 entry he'll climb into come Saturday. That was his most recent win in the series. The other three came at Watkins Glen (N.Y.) International, where he won three series races in four years (1998, 2000 and 2001).

A few of his fellow-Canadians in the race, though, may not have wins themselves, but they will have the benefit of being in recent road-course-winning rides. The No. 30 entry Tagliani will be driving won at Road America in Elkhart Lake, Wis., back in June. And while winless in Nationwide competition, Tagliani has experienced success in Montreal. 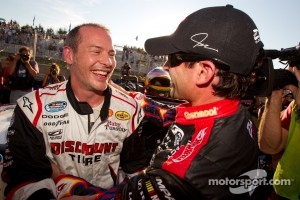 "I'm always proud to come back to Montreal and to be able to race on this fantastic road course named after one of my all-time racing heroes, Gilles Villeneuve," Tagliani said. "I really wanted to race here again, so when the opportunity presented itself with Turner Motorsports and we were no longer scheduled to be overseas, I was pretty excited. In Formula Atlantic, I won here from the pole and also had a pole in Indy Car."

Tagliani did finish second in the Nationwide race at the track a year ago.

"Last year's race was a great experience and it was amazing to qualify on the front row and finish the race second," Tagliani said.

Carpentier will be in an entry that visited victory lane at Circuit Gilles Villeneuve, sort of. Boris said drove the RAB Racing entry to victory lane in the Montreal race just a couple of years ago. It was a No. 09 car back then, instead of No. 99, the number it's carried since forming an alliance with Michael Waltrip Racing of the Sprint Cup Series. The No. 22 Dodge that Villeneuve will pilot on Saturday was driven to victory lane by Kurt Busch in last year's road course event at Watkins Glen.

Kyle Busch, driver of the No. 54 Kyle Busch Motorsports Toyota, and Sam Hornish Jr., driver of the No. 12 Penske Racing Dodge, look to be the only drivers planning to jet back and forth between Montreal and the Sprint Cup race in Michigan. Technically, Hornish is a Nationwide regular who recently inherited his Sprint Cup gig, making Busch the only Sprint Cup regular on the entry list for Nationwide action this weekend, so Saturday's race is sure to be a battle between road course ringers, specifically those of Canadian descent, and Nationwide Series regulars.

It may be worth nothing that it's been awhile since a series regular has won on a road course. The two series road courses so far this season have produced wins by a Camping World Truck Series regular (Nelson Piquet Jr.) and a Sprint Cup driver (Carl Edwards), and last year's race in Montreal was won by another Sprint Cupper (Marcos Ambrose).

Alex Tagliani ready for his third Nationwide race at Montreal