The team was thrilled with the finish, and hope to improve again next week at the 2.5 mile Talladega.

GAFFNEY, S.C. – After a long Friday night race at Richmond International Raceway, Landon Cassill and the No. 4 JD Motorsports team brought the Flex Seal Chevy home to a 19th place finish. The top 20 is the best finish for the team this year, and moves the No. 4 car up 16 points in the owner’s points battle. 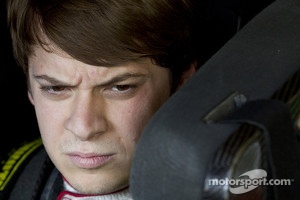 The weekend started out well as the experienced Cassill reported good speed in the No. 4 Flex Seal Chevy during both practices. After qualifying 19th, the team worked on a race strategy that would allow them to battle the field all night.

Once the green flag flew, the No. 4 car raced around the 20th position until the field was slowed for a long caution and red flag. After a miscue on the next pit stop, Cassill found himself in 25th place.

But the young driver wasted no time running down the leaders, and by lap 60 he was back in 18th. While battling track position, the No. 4 Chevy was consistently running lap times that mirrored the leaders before the next caution flew on lap 105.

The driver reported that he wanted no changes, the Flex Seal crew responded by producing a fast stop allowing the car to gain 3 spots off pit road.

The next caution came just in time as the No. 4 car received the Lucky Dog, and the team began to make subtle changes to help the driver as the race neared completion. After a series of late race wrecks coupled with smart driving, the No. 4 Flex Seal Chevy was sitting 12th with less than 20 laps to go.

Utilizing the first set of race used tires for the short run left the car handling different, but Cassill was able to hang on to post his best finish of the year. The team was thrilled with the finish, and hope to improve again next week at the 2.5 mile Talladega.

Landon Cassill: “What a great night for the JD Motorsports No. 4 Flex Seal team. We unloaded with a great car, and used the most with what we had all weekend. It was fun to be out there racing with the lead pack all night, and having fast stops in the pits. Hopefully we can continue to put together these runs for the team. Thanks to Johnny and Flex Seal for the opportunity again!”