Christopher Bell: "I wasn’t good enough" to win at Homestead 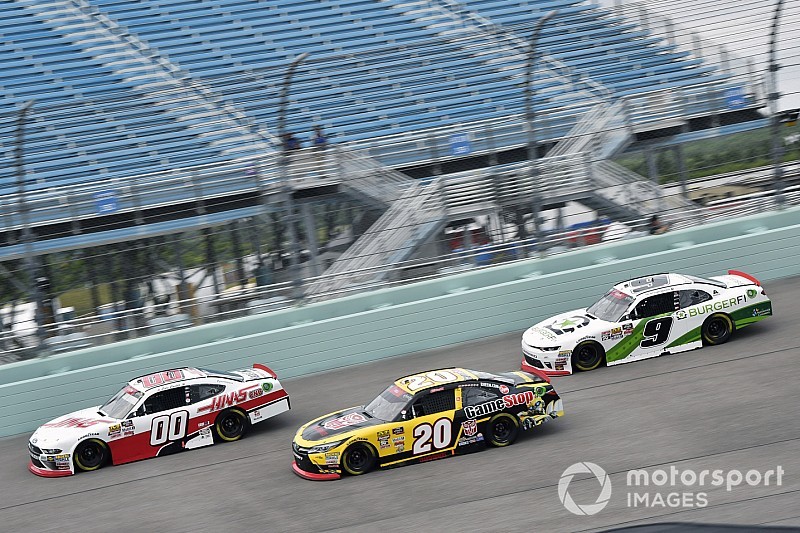 Christopher Bell had an incredible season with a series-leading seven wins, but he'll end the year fourth in the standings after a disappointing outing at Homestead.

Bell found himself in a must-win situation in last weekend's event at ISM Raceway. Despite that, he did exactly what he needed to do and captured the checkered flag, securing his place in the Championship 4.

His position was a similar one at Homestead-Miami Speedway with four drivers deadlocked in the standings, all going for the win.

He started Saturday's race from the outside of the front row with defending race winner Cole Custer on pole. Although he appeared strong early, the car faded on longer runs and ultimately, it just wasn't meant to be for the Joe Gibbs Racing driver.

“Not the night we wanted for the Gamestop Camry ... that’s for sure," Bell said afterwards. "But overall, the season was excellent. We had a really fast Camrys week in and week out. Unfortunately tonight, I wasn’t good enough. Hats off to everyone on this team 20 for Joe Gibbs Racing and everyone at the shop. Thank you for building fast race cars. Congratulations to Tyler Reddick. He did a great job and went out to attack all night. It paid off for him.”

The pivotal moment came during the final round of green-flag pit stops when the No. 20 team opted to pit earlier than their title rivals.

In the short-term, it worked out. Bell took the lead and battled hard with Tyler Reddick to keep it, but he couldn't hold on as the run advanced onward. With 37 laps to go, Reddick took the lead back and never looked back.

Bell faded to the backend of the top-five, but if there was any hope of still winning with a late-race restart, it went away with a flat left rear tire after contacting the wall.

The race remained green and Bell finished 11th, ending the season fourth in the standings behind Hemric, Custer and the newly crowned champion Reddick.

After reflecting, Bell admitted that he may have erred in not testing the top lane more in practice, as that is what allowed Reddick to drive away from the field in the closing laps.

"Coming back next year, maybe I need to come back with a different mentality. Instead of trying to take it easy and not run the top in practice or the race. Maybe I go out there and do it. Get used to it. That’s what Reddick did this week. It paid for him. The 00 (Cole Custer) was fast not running the top. We got some room there to improve on our car and I can look at driver data going back for next year. Try to get myself better here but bottom line, it wasn’t our night.”

Bell will have another shot at the title in 2019, as he will remain with the JGR Xfinity Series program next season. And before the race even began, he radioed his team and said he was glad to be sticking with them for another season. After Saturday's result, he's likely relieved to know he'll have a second chance to win it all.

Why a Le Mans winner is heading into an “unknown world”

Why a Le Mans winner is heading into an “unknown world”