Christopher Bell remains a perfect 2-for-2 at New Hampshire Motor Speedway in the NASCAR Xfinity Series. 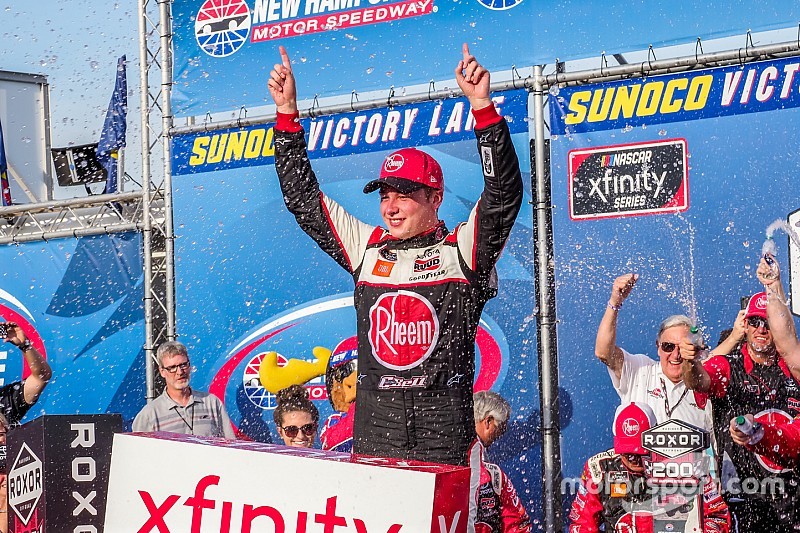 One week after his top rival Cole Custer picked up his series-leading fifth win of the season, Bell matched that total with a dominating performance of his own.

Bell led 186 of 200 laps and easily held off Custer to win Saturday’s Roxor 200 at New Hampshire – giving him wins in both series starts at the track.

Bell and Custer are now tied with a series-leading five wins and the victory was the 13th of Bell’s career.

“I just had a really good race car,” Bell said. “I’m very thankful to be driving these Supras for Joe Gibbs Racing. All of our partners, man, they just provide really fast race cars and I’m the lucky guy who gets to drive them.

“It’s pretty good (to get the win). This race track has been really good to us. It’s so, so fun to be able to drive for these guys.

“We knew we’d be good here. Whoever the (championship) favorite is will be decided at Homestead.”

On Lap 140, Noah Gragson tagged the wall in Turns 1 and 2 to bring out a caution that set up what could be the final round of pit stops.

All of the lead-lap cars elected to pit and Bell once again was the first off pit road. On the restart on Lap 147, Bell led the way followed by Allgaier, Reddick, Custer and Austin Cindric.

Custer powered into the second position on the restart in hopes of trying to run down Bell.

With 50 laps to go, Bell maintained a small advantage over Custer while Allgaier ran in third.

On Lap 154, Harrison Burton got turned by Paul Menard and slammed hard into the wall to bring out a caution.

“He needs to race me clean, he hit me twice,” Menard said over his team radio. On the restart on Lap 158, Bell was out front followed by Custer and Allgaier.

After the race, Menard said: “He hit me twice, I hit him once. He was mad at me for hitting him once. Some of the kids get it, some don’t.”

With 20 laps remaining, Bell held a steady lead of 1.5 seconds over Custer while Allgaier continued to run third.

"He didn't seem to really care, that's fine for him," Burton said of Menard after the race. "I'm just gonna go out and beat him on the race track."

With 20 laps remaining, Bell held a steady lead of 1.5 seconds over Custer while Allgaier continued to run third.

Bell dominated the second stage, taking the segment win by more than 6.5 seconds over Allgaier. It’s Bell’s 11th stage victory of the season.

Custer was third, Reddick fourth and Menard completed the top-five.

Following the break between Stages 1 and 2, those cars that had not pit under the previous caution did so this time which allowed Bell to inherit the lead. On the restart on Lap 53, Bell was followed by Reddick and Allgaier.

After 60 laps, Bell had moved out to 2.8-second lead over Reddick. Custer ran third, followed by Allgaier and Chase Briscoe.

With 20 laps remaining in the second stage, Bell’s lead over Reddick had ballooned to 4.2 seconds as Allgaier ran in third.

After 80 laps, Allgaier got around Reddick to move into the runner-up position behind Bell.

With five laps to go, Custer went to the inside of Reddick to claim the third position as Bell continued to lead the way.

Brandon Jones inched out the Stage 1 victory as he, Bell and Reddick raced three-wide for the lead at the conclusion of the 45-lap stage.

The stage victory was the first of the season for Jones.

Ryan Sieg ended up fourth and Allgaier completed the top-five.

Custer started on the pole but Bell went inside of him coming to the start/finish line to grab the lead on Lap 1.

After 15 laps, Bell had moved out to almost a 1-second lead over Custer. Allgaier ran third, Menard fourth and Jones fifth.

With 20 laps remaining in the first stage, Bell’s lead over Custer had grown to 1.3 seconds while Allgaier remained in third, 3.4 seconds behind the leader.

On Lap 32, John Hunter Nemechek tagged the Turn 1 wall and dropped his rear bumper cover on the track which brought out the race’s first caution.

Most of the lead-lap cars elected to pit and Bell was the first off pit road. Brandon Jones and several others remained on the track and led the way on the restart on Lap 38.

Sieg grabbed the lead on the restart only to see Jones power back around him and back out front.

With two laps to go in the stage, Jones continued to lead followed by Reddick and Bell.

Three drivers had to start the race from the rear of the field – Cindric for an engine change, Shane Lee for missing driver introductions and Vinnie Miller for a driver change.