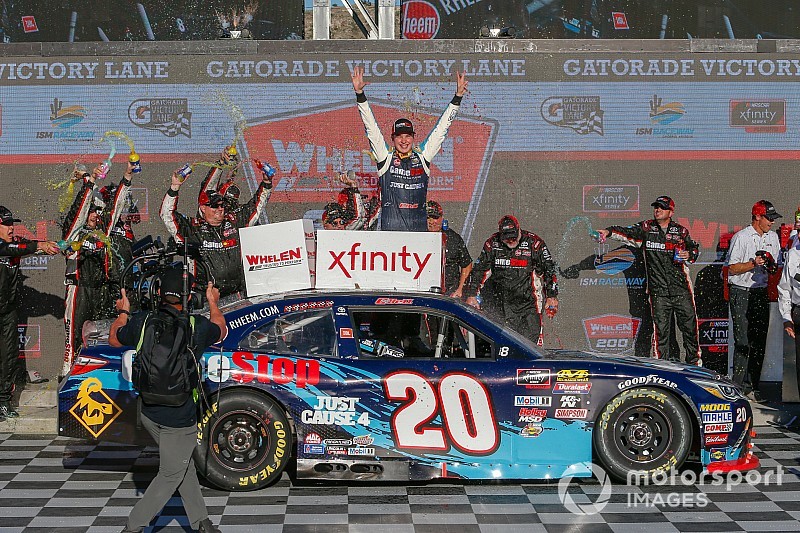 Christopher Bell did exactly what he needed to do – he won his way into the NASCAR Xfinity Series championship race.

Starting from the rear of the field after inspection failures prevented him from qualifying, Bell took the lead for the first time on Lap 108 of 200 and held off Daniel Hemric to win Saturday’s Whelen 200 at Phoenix.

“Let’ go get ourselves a championship,” Bell said over his team radio as he took the checkered flag.

After a dismal semifinal round in the playoffs, a win was the only thing that would ensure Bell a chance to compete for the series championship next weekend at Homestead, Fla., and he delivered.

"Man, that's never sounded sweeter in my life," Bell said after being told he would advance to the Championship 4. "After Kansas and Texas, I just kind of accepted that we weren't going to get there.

"We came here with a 'Let's have fun' attitude. We didn't really make our way up front very fast. I kind of got stalled out once I got into the Top 15. I knew this thing was really fast because yesterday in practice it was really good. My pit crew did an outstanding job.
"We're going to Homestead, baby! I'm so thankful for my team. Without them, they brought probably our best car we've had all year here this weekend. It's a pleasure to drive them. A race car driver is only as good as his race cars."

The win is Bell’s seventh of the season, a rookie record he had already set earlier in the year. He has eight series win in his career.

Joining Bell in the Championship 4 at Homestead competing for the series title are Cole Custer (who won last weekend at Texas), Hemric and Tyler Reddick.

Bell moved into the lead for the first time in the race on Lap 108 of 200 as John Hunter Nemechek dropped back into second.

With 70 laps to go, Bell had moved out to a more than 2.7-second lead over Hemric and Justin Allgaier running in third.

On Lap 137, Tyler Hill wrecked on the backstretch to bring out a caution. All of the lead-lap cars elected to pit and Bell was the first off pit road, followed by Hemric and Tifft. The race returned to green on Lap 143.

Ty Majeski wrecked on Lap 145 after contact with Shane Lee to bring out another caution and Nemechek got into the right-front of Allgaier in the same incident. The race returned to green on Lap 150.

On Lap 155, a caution was displayed after Tommy Joe Martins’ No. 8 Chevrolet began pouring smoke and stopped on the track. The race returned to green with 38 laps remaining and Bell still out front.

After complaining of losing his brakes, a fire broke out in the right-front wheel-well of Allgaier’s No 7 Chevrolet on Lap 181. He began to drop back in the field, which would knock the regular season champion out of further title contention.

Allgaier again took home the stage victory, this time over Nemechek, who was involved in a close battle with Cindric at the finish.

Cindric ended up third, Bell was fourth and Hemric completed the top-five.

Following the break between Stages 1 and 2, Cindric was the first off pit road and assumed the lead on the restart on Lap 54.

During pit stops, Tifft was penalized for speeding on pit road and Jones received an uncontrolled tire penalty.

Allgaier quickly made his way around Cindric on the restart to retake the lead as Nemechek moved into second.

With 20 laps remaining in the second stage, Allgaier held just over a 1-second lead on Nemechek, with Cindric third and Bell fourth.

With five races left in the second stage, Allgaier had built up more than a 3-second lead over Nemechek.

Allgaier held off Cindric to take the Stage 1 win victory.

Before the first lap of the race was completed, Akinori Ogata wrecked which brought out a caution. On the restart, Nemechek, the pole-winner, remained in the lead.

On Lap 21, Allgaier made his way around Nemechek and into the lead for the first time.

With 20 to go in the first stage, Allgaier held a small advantage over Nemechek. They were followed by Cindric, Preece and Custer.

With 15 laps left in the opening stage, Allgaier had moved out to a more than 1.5-second lead over Nemechek. Bell, who started in the rear of the field because he failed to pass inspection before qualifying was completed, had made his way up to 11th.

On Lap 36, Bell got around Sadler and moved into the Top-10 for the first time in the race. Shortly afterward, Sadler developed a bad right-front tire rub.

Replays showed Sadler appeared to get damage from a run-in with Chad Finchum earlier in the stage.