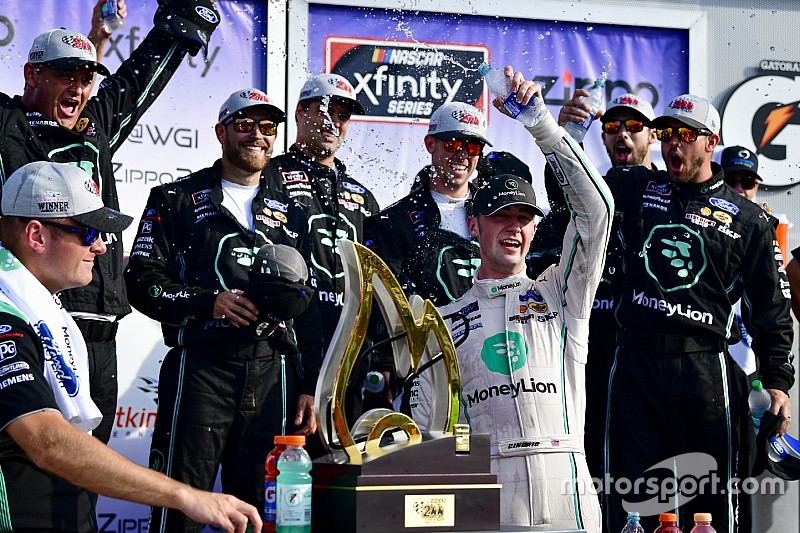 Austin Cindric caught A.J. Allmendinger for the lead but it took another lap of banging for Cindric to emerge with his first career victory in the NASCAR Xfinity Series.

On four new tires after a late-race pit stop, Cindric finally ran down then-leader Allmendinger with one of 82 laps remaining, to take the lead, but that was just the beginning.

Over the final lap, Allmendinger nudged Cindric to briefly retake the lead. Cindric briefly ran off the course, returned and took the battle right back to Allmendinger, passing him again and holding on for the win in the Zippo 200 at Watkins Glen (N.Y.) International.

The win is Cindric’s first in 54 career starts and locks him into the Xfinity Series playoff field.

"This is awesome," Cindric said. "I have so many people to thank to be here. But man, you fans are awesome - thank you for coming to Watkins Glen every single year. I'm so pumped.

"That was fun. That's why you guys show up. A.J. was pumped after the race. He's such a cool guy. It was cool to race him for my first win. It feels good."

Asked about his decision to pit late in the race with fresh tires, Cindric said: "I've been on the other side of it. (Christopher Bell) had been pretty good all day, so it was going to be hard to hold off depending on which lane he had on the restart.

"I was kind of bummed. I broke the clutch out of it trying to do a burnout so my guys are going to have to do a little extra work and I'll have to buy them an even bigger dinner. We talked before the weekend and we knew something would have to go wrong with (Kyle Busch), but I'm so blessed to be able to be here."

Cindric, 20, is the son of Team Penske President Tim Cindric and is in his second full season competing in the Xfinity Series. He won one win in Trucks and two in the K&N Pro Series East.

With 25 laps to go, Allgaier was the leader, followed by Noah Gragson. Gray Gaulding was third, Brandon Brown fourth and Scott Heckert fifth. All still had to make a final stop.

Cindric was third on Lap 59, the first car who had already made his final stop.

With 20 laps remaining, Allgaier remained out front but still had to pit as Cindric had made his way to second and Allmendinger third.

Allgaier finally made his stop on Lap 64, turning the lead of the race over to Cindric.

NASCAR threw a caution on Lap 69 for debris off Turn 1 and on the exit of the inner loop, where several cars had spun.

Several of the lead-lap cars elected to pit but Allmendinger stayed out and took over the lead when the race restarted on Lap 72. He was followed by Bell, Allgaier and Custer.

After the restart, several cars wrecked in Turn 1. Josh Bilicki suffered extensive damage which brought out the caution once again.

On the restart on Lap 76, Allmendinger led followed by Bell, Tyler Reddick, Allgaier, Cole Custer and Cindric. After a wild backup toward the inner loop, Cindric made his way into second and began working on running down Allmendinger.

With five laps remaining in the race, Allmendinger held about a 1.2-second lead on Cindric as Allgaier ran third.

Allmendinger, making his second start of the year for Kaulig Racing, held off Blaney to take the Stage 2 win.

Following the break between Stages 1 and 2, most of the drivers who had not pit made their stops but Bell elected to remain on the track and led the way on the restart on Lap 24.

Jeremy Clements, who had been running third, had to restart from the rear of the field for having a crew member over the wall too soon during his stop.

Shortly after the restart, Blaney got around Bell to take the lead for the first time in the race.

With 15 laps to go in Stage 2, Blaney had about a 1-second advantage over Bell with Preece in third. After pitting during the break, Kyle Busch was up to eighth.

After 30 laps, Blaney remained out front as Bell elected to make his pit stop. Busch moved up to second, 3.4-seconds behind the leader.

Busch finally caught Blaney for the lead on Lap 35 but as both exited the inner loop, Busch’s No. 18 Toyota veered off the course and came to a stop on the runoff to bring out a caution.

Busch believed the upper control arm broke and he was forced to take his car immediately to the garage, bringing an early-end to his race.

The race returned to green on Lap 37 with Blaney in the lead followed by Allmendinger and Preece.

Allmendinger got around Blaney in Turn 1 on the restart to take the lead for the first time in the race.

Busch led all 20 laps on his way to the stage victory, which ended under caution when Justin Allgaier wrecked Ross Chastain exiting the inner loop.

Allgaier was retaliating for an incident following the restart on Lap 14, when Chastain got into Allgaier and sent his No. 7 backing into the Turn 3 wall.

As the race went green, Tyler Reddick ran off course and then missed the inner loop. He was forced to come to a stop before proceeding and then dropped down pit road to have the front grille cleaned of debris.

Busch, who started on the pole, had more than a 1-second lead over Cindric after two laps.

After five laps, Busch’s lead over Cindric had expanded to more than 2.5-seconds. Bell was third, Blaney fourth and Allmendinger fifth.

On Lap 10, Allmendinger went three-wide and passed both Blaney and Bell to take the third spot.

On Lap 11, Joey Gase’s No. 35 Toyota came to a stop on the track in the runoff area of Turn 1 to bring out the first caution.

Some lead-lap cars pit but Busch, Cindric and Allmendinger all stayed out and held the top three positions when the race restarted on Lap 14.

In Turn 3, Allgaier slammed into the outside wall after contact from Chastain while exiting the inner loop to bring the caution back out. “I backed into the fence but I’m pretty square,” Allgaier said over his team radio. “The tires are OK.”

The race returned to green on Lap 17 with Busch still out front followed by Bell and Cindric.

Both Allmendinger and Cindric were among those who elected to pit before the conclusion of Stage 1.

With two laps remaining in the stage, Busch maintained about a 1.2-second lead over Bell with Clements running in third.

Before the race several drivers had to move to the rear before the start – Josh Williams (engine change), Tommy Joe Martins (missed driver meeting), Custer (backup car), Heckert and Vinnie Miller (both for unapproved adjustments).