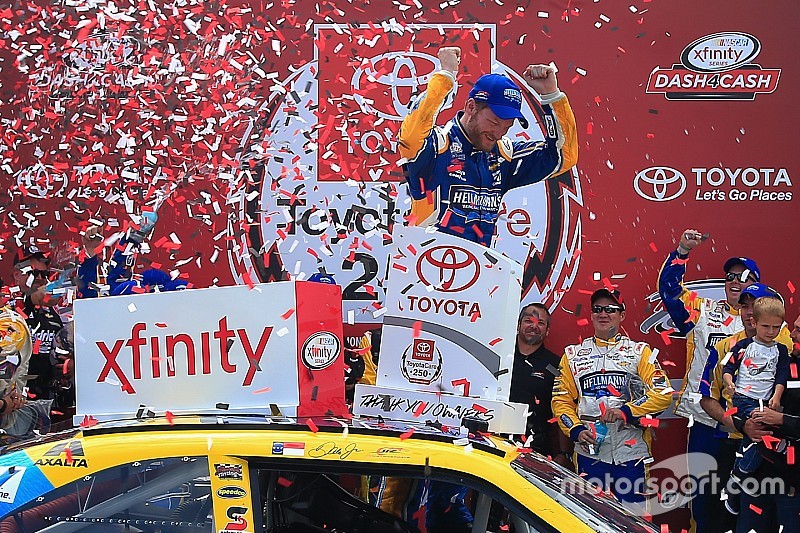 JR Motorsports has experienced much success in the NASCAR Xfinity Series, but until Saturday team co-owner Dale Earnhardt Jr. had never won a race in one of his own cars.

Earnhardt withstood a fierce challenge – and some last-lap contact – from Ty Dillon to win Saturday’s ToyotaCares 250 at Richmond (Va.) International Raceway – his first series victory since 2010.

“I didn’t even realize I hadn’t won before (with JR Motorsports). It was a great run for us,” said Earnhardt, who led 128 of the 149-lap main event. “Ty was pretty good at the end. He drove into (Turn) 3 pretty deep and I followed him in there.”

Earnhardt nearly drove through the main event without incident. He pit under green late in the race and as he was about to pull into his pit stall, Erik Jones was pulling out and the two nearly collided.

Earnhardt lost some time on the track but retained a small lead over then second-place and JRM teammate Justin Allgaier.

“That was tough. I had to stop to let him out and I was a little upset with my crew chief for having me pit when everyone else around us were pitting, but he can’t tell what’s going on. He did a good job,” Earnhardt said.

Dillon’s second-place finish earned him a $100,000 bonus from the Dash4Cash program. He was the highest finisher among the four drivers (Jones, Brennan Poole and Allgaier were the others) who qualified for the bonus through 35-lap heat races earlier Saturday.

“Winning the bonus is awesome. It’s so much fun. I really enjoy the heat races – they really helped us today getting a good starting spot,” Dillon said.

Dillon was working without his regular crew chief, Nick Harrison, this weekend. Harrison was suspended for one race by NASCAR for a rules violation last weekend at Bristol, Tenn.

“This team is so strong and it’s built by Nick Harrison,” Dillon said. “I’m so proud of all these guys. We came up a little bit short on the win today but we’re going to get us one very soon.”

Elliott Sadler finished third in the main event, Daniel Suarez was fourth and Austin Dillon was fifth. Suarez continued to lead the series standings and holds a nine-point advantage over Sadler.

Ty Dillon, who started fifth in the second 35-lap heat race, made a daring move on the first lap and catapulted himself all the way into the lead by Turn 3 of the first lap.

Dillon made contact with Allgaier, who started third, while making his move to the front. Dillon ended up leading all 35 laps in the heat. He and Allgaier both qualified from the heat to become eligible for the $100,000 Dash4Cash bonus in the main event.

“This place is pretty tough on the long run. With the heat race, I was just trying to win the heat race and I’m sorry I got into Justin a little bit there,” Dillon said. “We got a little bit of work to do to be as good as the Gibbs (Racing) guys.”

Dillon and Allgaier spoke briefly on pit road after the race about the incident.

“It’s good to be in (the Dash4Cash) two weeks in a row,” Allgaier said. “Now, we just need to capitalize on it.”

Jones picked up where he left off last weekend at Bristol, Tenn., starting third and grabbing the lead by Turn 2 of the first lap of Saturday’s first 35-lap heat race.

Jones, who won the race at $100,000 Dash4Cash bonus at Bristol, claimed the top starting position in the main event and he and Poole (who finished fourth) became two of the four drivers eligible for the $100,000 bonus at Richmond.

Earnhardt finished second in the Heat, followed by Matt Tift, Poole and Sadler.

Jones said he would need to save tires in the main event. “It should be fun moving around the track as the race goes on,” he said.