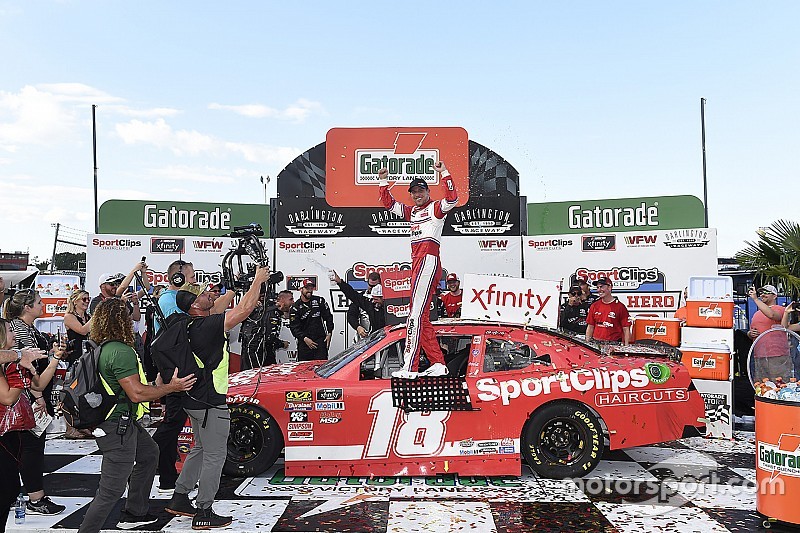 Denny Hamlin won another NASCAR Xfinity Series race at Darlington, but this one came under much more difficult circumstances.

UPDATE: Hamlin's car failed post-race inspection and he has been disqualified.

In his five previous series wins at Darlington, Hamlin had won from the pole. Not this time.

After hitting the wall in practice on Friday, Hamlin had to start Saturday’s SportClips 200 from the rear of the field but that didn’t keep him from the front.

On Lap 121 of 147, Hamlin passed Ryan Blaney for the lead and then held off a furious charge from Cole Custer on the final lap following a restart with 10 to go.

Custer tried to go low on Hamlin through Turns 3 and 4 on the final lap but seemed to get slowed up by the lapped car of Vinnie Miller.

The win is Hamlin’s first of the season and 18th of his career.

“We did not have the best car by any means but luckily the techniques I’ve learned over so many years kind of helped us there,” Hamlin said. “They guys did a great job getting this car ready.

“I put us behind the eight-ball by putting us in a backup car to begin with by making a big old driver mistake.

“This is amazing to see this turnout here. Darlington gave me my first start in the Xfinity Series and is what got me my job with Joe Gibbs Racing. So, thank you fans, see you tomorrow and hopefully we’ll do it one more time.”

With 40 laps remaining, Blaney maintained small but steady lead over Custer as Hamlin had moved up to third. Reddick ran fourth and Justin Allgaier – despite a few run-ins with the wall – was fifth.

With 30 to go, Blaney remained out front but Hamlin had moved into the runner-up spot and began trying to run down the leader. Custer fell to third.

On Lap 121, Hamlin finally ran down Blaney on the frontstretch to take the lead for the first time.

On Lap 132, Josh Williams spun off Turn 4 and slammed into the inside retaining wall to bring out a caution. All of the lead-lap cars elected to pit and Hamlin was the first off pit road.

Hamlin led the way on the restart with 10 laps remaining followed by Custer, Blaney, Reddick and Earnhardt Jr.

Blaney got around Reddick with six of 45 laps remaining and held on for the Stage 2 win over Allgaier.

Reddick ended up third, Custer was fourth and Hamlin rounded out the top-five.

Following the break between Stages 1 and 2, all of the lead-lap cars elected to pit with Reddick the first off pit road. On the restart on Lap 53, Reddick was followed by Bell and Blaney.

Brandon Brown spun off Turn 2 after the restart and was tagged by Noah Gragson to bring another caution. The race returned to green on Lap 57 with Reddick still in the lead.

With 30 laps remaining in the second stage, Reddick held a small advantage over Blaney. They were followed by Chase Briscoe, Allgaier and Custer.

After 70 laps, Hamlin had made his way up to the sixth position and was closing in on Custer for fourth.

With 24 laps remaining in the stage, Blaney caught Reddick and got side-by-side with him twice but was unable to complete the pass.

On Lap 85, Blaney finally went to the inside of Reddick and cleared him to retake the lead in the race.

With two laps to go, Blaney had already moved out to a more than 1.2-second lead over Reddick as Allgaier moved to third.

On the last lap, Allgaier got into the wall as he battled Reddick for the runner-up position.

Reddick held off a strong challenge from Blaney to take the Stage 1 win.

Bell was third, Briscoe fourth and Allgaier rounded out the top-five.

Blaney, who started on the pole, moved out to a 2-second lead over Reddick after eight laps. Hamlin, who started from the rear of the field, had already moved up to 15th.

On Lap 12, John Hunter Nemechek spun off Turn 4 and narrowly avoided Haley to bring out the first caution of the race.

Only a couple of drivers elected to pit under the caution. When the race returned to green on Lap 17, Blaney continued to lead followed by Reddick and Bell.

Reddick got around Blaney shortly after the restart to take the lead for the first time in the race.

With 20 laps remaining in the first stage, Reddick maintained a small lead over Blaney with Bell running in third.

After 35 laps, Reddick had expanded his lead over Blaney to 1.2 seconds while Bell remained third. Briscoe was fourth and Custer ran fifth.

Four drivers had to start the race from the rear of the field – Hamlin for going to a backup car and B.J. McLeod, J.J. Yeley and Morgan Shepherd, all for unapproved adjustments.