Denny Hamlin’s sixth NASCAR Xfinity Series win Saturday was short-lived as his No. 18 Toyota failed post-race inspection and was disqualified. 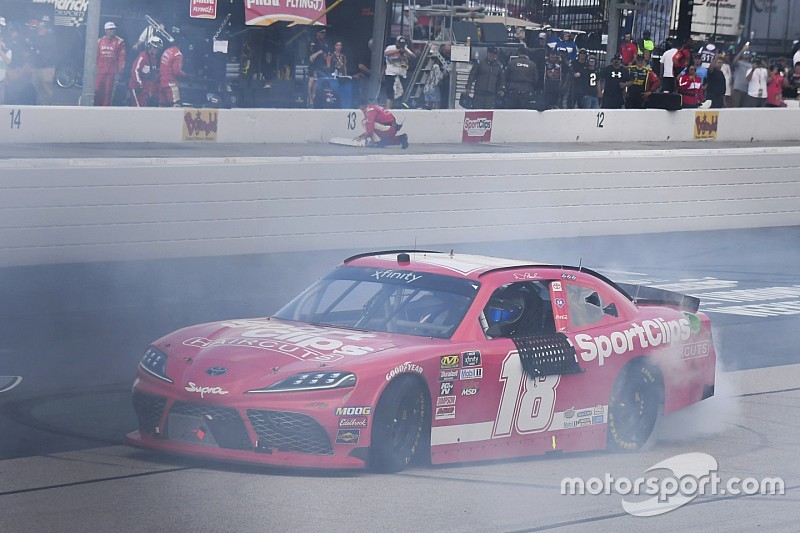 Hamlin’s No. 18 was found to be too low in the left-front and too high in the right-rear.

The Joe Gibbs Racing team has until noon ET Monday to appeal the penalty if they should so choose.

With the disqualification, second-place finisher Cole Custer was named the winner of Saturday’s SportClips 200 at Darlington (S.C.) Raceway.

“We took six cars across the post-race inspection, with the No. 9 car being the random car today (along with the top-five finishers). The No. 18 car was found to be low and was DQ’d,” said Xfinity Series director Wayne Auton.

“I think you have to look at the garage area. We’re in the middle of a 15-week stretch. The playoffs are coming and everybody is pushing everything they can to get that little bit they can to win the race.”

As of yet there have been no disqualifications from the Cup series.

The win gives Custer his sixth victory of the 2019 season, which ties him with Christopher Bell for the most in the series this season.

“It’s a really strange feeling, obviously,” Custer said after being notified of his victory. “You don’t want to win that way but it is what it is. We all play by the same rules.

“Was that the deciding factor? No. That wasn’t the reason he won the race but it is what it is. We get the points, we get the money and we get the trophy, I guess. We’ll take it.”

Hamlin posted a message for Custer on his Twitter feed following the announcement: