Dillon's dream? To run full-time in Cup and XFINITY in 2016 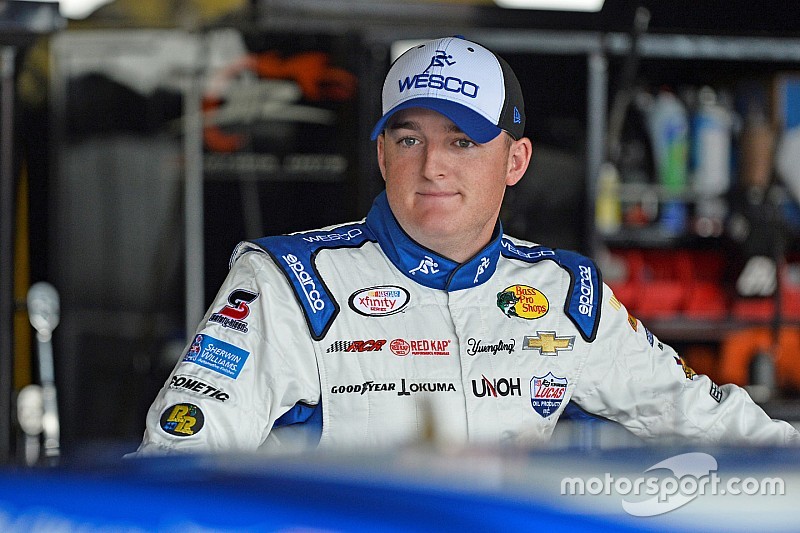 The only thing standing behind Ty Dillon and a full-time Cup ride is sponsorship.

The 23-year-old grandson of Richard Childress, who is currently in his second full season on the NXS tour, earned his first XFINITY Series win last year at the Brickyard.

Dillon also dabbles in the Sprint Cup Series. In his last two Cup starts, at Pocono and Michigan, Ty has out-performed his older brother Austin.

Dillon’s current goal is to race as much as possible and eventually be behind the wheel of a Richard Childress Racing Sprint Cup car — “no matter what”.

I want to be able to run full-time in both series.

“From my understanding — and the talks that I’ve had with my grandfather (team owner Richard Childress) — our full focus is, I want to be able to run full-time in both series,” Dillon said on SiriusXM NASCAR Radio on Wednesday. “He announced that I was going to run full-time in the XFINITY Series again next year and I think that might have confused some people.

“We’re still trying to find full sponsorship and the capability to run the full Sprint Cup series also. So the plan going forward this year is to win the XFINITY championship. Hopefully in the off-season or any time before that, lock down sponsorship to run the full-time Sprint Cup Series and also do the full-time XFINITY Series. That’s a dream I’ve always had as a driver to run both series every weekend and be in a race car every single race — whether it’s to be in a truck also.

“I love to race. That’s what it’s about for me is just being behind the wheel and winning races. So that’s our plan, is to be in both series full-time. That’s what we’re working on right now. But that’s on the back burner compared to winning this championship, that’s the biggest thing on my plate right now, and hopefully locking down sponsorship to be able to run both series next year.”

While there’s been speculation that Dillon could race for another Sprint Cup operation, the driver acknowledged there had been "small ramblings" of that possibility, but that would be “a plan B”.

The task at hand

Dillon currently trails points leader Chris Buescher by 29 points in the NXS. In 14 starts this season, Dillon has three top-five finishes, 10 top 10s and average finish is 8.5. However, the brass at Richard Childress Racing decided it was in the driver’s best interest to swap crew chiefs with the NXS teams.

Entering Daytona International Speedway this weekend, Dillon’s No. 3 Chevy squad will be led by veteran crew chief Nick Harrison, who replaced Danny Stockman Jr. The teams have had the off-weekend to acclimate to the new arrangement.

“It’s a pretty big change for us,” Dillon said. “Danny Stockman and his guys, I worked with them for the last year and a half or so, it’s a tough deal but it’s part of the sport. We didn’t feel like we were running the way we should be right now. We felt like we should be running better. It was time to make a change.

“I’m excited to work with Nick Harrison. His guys have been doing a great job this year and it’s gone as smooth as possible. Danny and those guys — they weren’t just my team, they’re great friends. It was a little bit hard to do but everybody understands. We’re all on the same page. We’re all going to be working together to try to win this championship. And they’re going to be trying to win the owner’s championship with Austin, Paul (Menard) and Brandon Jones.”

Getting up to speed

Dillon believes his previous opportunities to work with Harrison will help expedite the learning curve between driver and crew chief. The driver expects the transition to be seamless and feels that as long as he has fast cars, everything will come together.

In his last four starts at Daytona, Dillon has been fairly stout. He's completed every lap raced on the 2.5-mile track, has an average finish of 12th and earned a career-best NXS result of third in February.

“It’s been a nice little change and hopefully we’ll go into Daytona with some great momentum,” Dillon said. “I know I have a new, great group of guys that have been around RCR for a long time. So it shouldn’t take a long time to get jellin’ and get us a win.”