"It’s pretty surreal, actually, to be sitting up here talking to you guys," said Kwasniewski.

To Kyle Busch, it was "just chaos at first," but fun. 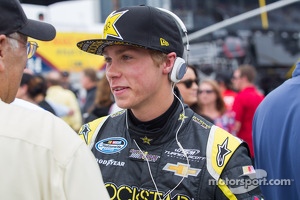 However they expressed it, drivers agreed that NASCAR’s new knockout qualifying format, introduced for the first time in Friday’s NASCAR Nationwide Series time trials, added spice and excitement to the process of ordering the field for Saturday’s DRIVE4COPD 300 at Daytona International Speedway.

And it put 18-year-old rookie Dylan Kwasniewski on the pole.

"It’s pretty surreal, actually, to be sitting up here talking to you guys," said Kwasniewski, who notched his first Coors 21 Means 21 pole award in his first attempt at a Nationwide race.

Kwasniewski credited Patrick with leading the trio around the track and dodging a knot of traffic on the backstretch -- something that was never an issue in the single-car qualifying that now is a thing of the past.

"I was looking at this sea of cars," Kwasniewski said. "It looked like an army in there. Coming up to it, I was like, 'I don’t know how we’re going to navigate through this. We might get blocked out.’ But somehow she (Patrick) picked it just right.

"She shot the middle really good, and we were able to get through there cleanly. I was amazed we got through there, not only that we put up that fast of a lap. She did a great job of guiding us though there safely, and it was definitely a team effort to put up these fast times."

Though Dale Earnhardt Jr., who qualified 16th, would prefer to preserve the traditional single-car format for Daytona 500 qualifying, as NASCAR did this year, he enjoyed the multi-car session, which was interrupted by rain.

Scheduled second and third sessions of 10 and five minutes were canceled, with the field set by times in the first session.

"I think it’s a great format for the rest of the season, and for the fans it’s very exciting," Earnhardt said. "It’s definitely more interesting than what we typically do."

Fourth-place qualifier Kyle Busch said it took some time to gauge what was happening on the track.

"It was quite a handful -- a lot going on," Busch said. "There’s not enough TV cameras or TV coverage that can cover everybody’s situation. So it’s just chaos at first. You’re sitting at the end of pit road trying to figure it all out, what was going to happen, then trying to get out there, get in a groove and get a good enough tow and have the help behind you to make a big lap.

"All in all, I think it was fun. We qualified a heck of a lot better than we would have single-car, so you can’t help but have a smile on your face for that."

PATIENCE IS A VIRTUE

NASCAR Sprint Cup Series rookie Kyle Larson is one of 10 drivers doing double-duty in the Daytona 500 and DRIVE4COPD 300. Though the nose of his No. 42 Chip Ganassi Racing Chevrolet was damaged in a last-lap crash in the second 150-mile Budweiser Duel at Daytona qualifying race, Larson wouldn’t trade the experience for a clean race car.

"I feel like I learned a ton last night in the second Duel," Larson said. "I was able to make a few moves -- most that didn’t work -- so I learned from that. Sunday (in the Daytona 500) is going to take a lot of patience to log some laps there for the first half of the race, then try to position yourself good for the end of it.

"We got a little front-end damage (Thursday) in that wreck. My Target guys made some repairs on that stuff. I’m sure it will be fine come Sunday -- just really looking forward to it and hope to get a good finish."

The technologies represented can facilitate the wrapping of a race car with an intricate design or make a street sign readable at night; keep a furnace running or remove stains from a sink; protect a car’s paint from chipping or keep glare out of a living room; and provide the means to write notes or hang photos.