This is going to be a really competitive race.

“This is going to be a really competitive race,” Edwards said after his run. “Denny (Hamlin) will be coming.”

After making his run, Edwards awaited Hamlin’s turn at qualifying. Hamlin posted the fastest time in practice earlier in the day and, as a result, was 30th in the qualifying line.

Hamlin’s qualifying time was less than stellar, though, as his car slid up the racetrack and brushed the wall. His fastest lap time during qualifying was 21.826, which was good enough for the 11th starting spot. 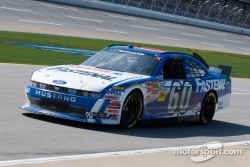 Hamlin wasn’t the only Sprint Cup regular to have difficulty during Nationwide qualifying. Brad Keselowski wound up aborting his first qualifying lap due to a handling issue. On his second lap, his time of 21.796 earned him the 10th spot on the starting grid.

Instead, it was part-time driver Sam Hornish Jr., the final driver to attempt a qualifying run, who came the closest to knocking Edwards off the pole. Hornish’s best lap of 21.627 seconds earned him a front row start alongside Edwards. The second starting spot for Saturday night’s race is the best of Hornish’s Nationwide Series career.

According to Hornish, while he was making his qualifying run, the car felt kind of slow because it handled so well.

“I didn’t have to overdrive it at all,” he said.

A couple of series regulars make up the second row, with Brian Scott starting third after posting a time of 21.637 seconds.

I didn’t have to overdrive it at all.

“I’m battling a sore throat and not feeling good,” Scott said. “I was in a hurry to get those two laps over with.”

Aric Almirola will start next to him in fourth after a qualifying lap of 21.706 seconds.

Only 41 cars attempted qualifying runs, so not only did everyone who made runs earn starting spots, but the Bubba Burger 250 will be two cars shy of a full starting field.

The slowest qualifying time of the day was turned in by Mike Harmon, who posted a lap time of 23.246 seconds.