FINAL EVENT: Elliott Sadler and the No. 11 OneMain Financial team head south to Homestead-Miami Speedway this weekend looking to utilize the last event of the NASCAR Nationwide Series season to bring home the team's first victory. With seven previous Nationwide Series starts at Homestead, Sadler has earned one top-five and three top-10 finishes, as well as 33 laps lead. He brings experience from the NASCAR Sprint Cup Series with 12 starts and one top-10 finish. Sadler also competed in two NASCAR Camping World Truck Series events at the 1.5-mile track. 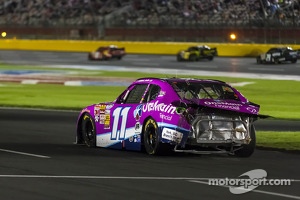 DOUBLE DUTY: Sadler will finish out the season with a busy weekend, competing in both the Nationwide Series and Sprint Cup Series. After driving the No. 11 OneMain Financial Toyota on Saturday, Sadler will strap into the No. 55 Michael Waltrip Racing Toyota on Sunday at 3 p.m. ET on ESPN.

LOOKING BACK: In the final event of the 2012 season at Homestead, Sadler fought a loose-handling car and a pit road penalty to finish ninth. The finish earned him the runner up spot in the Nationwide Series championship battle.

TO THE POINT: Sadler sits in the fifth position in the Nationwide Series driver championship point standings, 83 points behind the leader heading into the final race of the 2013 season.

LAST RACE: Phoenix International Raceway: Starting from the 16th position, Sadler and the OneMain Financial team worked hard to score a solid finish. With a fast Toyota, Sadler was able to move into the top 10, but battled a tight-handling condition toward the end of the event. Sadler was able to bring home an eighth-place finish, notching the team's 20th top-10 finish of the season.

THINK PINK: The OneMain Financial driver will sport pink Oakley driving shoes throughout the entire Nationwide Series season to show support for breast cancer awareness and honor his mom, Bell. She was diagnosed with breast cancer in 2007, and is now a survivor. This season, he will also wear special pink Oakley driving gloves. Fans will have the opportunity to bid on his race-worn shoes throughout the season, with proceeds going toward breast cancer research and education.

Elliott Sadler Quotes: "We are coming into Homestead this weekend with an all-or-nothing attitude. We are going to go for the win this weekend and give it everything we got. This OneMain Financial team has grit and determination, and we are going to fight until the end."

Annett looks for strong finish in 2013 finale at Homestead

Parker Kligerman looking to hop, skip and jump his way up the standings