What does Elliott Sadler hope to accomplish this weekend in Daytona?

What is your outlook for this weekend at Daytona? “We always have a good outlook for restrictor-plate races. We ran very well here in February and of course we had the win the last time we were at a restrictor-plate race so it’s always a wild one. You never know what’s going to happen. It’s always got a lot of cautions here at that end. You’ve got to be in the right line at the right time and hopefully we’ll keep ourselves upfront. We had a really fast car. Same car we won with at Talladega. Really good in practice and just try to stay out of trouble and be in the right place at the right time and be there at the end. Not only are we trying to race for the win this weekend, we also are racing to be a part of the Nationwide Series ‘Dash 4 Cash’ and that starts this weekend too so that’s always very important to our series so we also have that in the back of our mind as well.”

Can you talk about your craziest fireworks moment during your youth? “No. We used to do some stupid things with fireworks back in the day so let’s just leave it at that. I don’t want to incriminate anyone, but we love fireworks. I’ve been fortunate enough to -- I took my kids to Disney World this week and we’ve gotten to see fireworks each night and I told them that after we do a little racing tomorrow night we’ll have a great fireworks show here so we’re looking forward to that. We’ll leave that to the experts from now on moving forward.”

Does it wear on you or motivate you that the NNS championship race has been so close this season? “I don’t know. I think that if you worry yourself to death about points right now you’re going to be tore all to pieces by the time November gets here. We look at it and say, ‘Okay, Regan (Smith) is doing good and Chase (Elliott) is doing good.’ And we feel like it’s a three-horse race right now and it has been so far. As far a like trying to critique it and worry yourself to death about how close you are I think there’s no way it can be healthy for you week in and week out. We just race, man. I race to try to run upfront and let’s lead some laps and let’s put ourselves in position to try to win the race. Let’s take some chances and if we can do that and the points will take care of themselves. We look at the points a little bit, but it’s just not that time of season yet to -- there's too many wild card races and stuff left to do. I mean, we’re only halfway to say the least.”

Were most of the NNS teams done with practice early today due to the heat? “I contribute that to you have all your eggs in one basket with the race car. I mean, most of these Nationwide teams put -- you take the primary car and you have it in the wind tunnel and you’ve done everything you can do to it before you unload. When you unload here at Daytona, especially in the Nationwide Series, you’ve done all you can do to that car. So, you go out there and you run it one run and you see how it is in the draft and make sure the carburetor is working correctly and the transmission is shifting okay and it’s not doing anything funny in the draft and you run a few laps. I think we ran like six laps of practice and we came in and scuffed a couple sets of tires and we were done. But, in the Nationwide Series with the rules that we have from NASCAR that kind of keep us all in the small little play box you’ve done all you can do in the shop. There’s no need to go out there and take chances and wreck a car that you have all that time in -- wind tunnel time and fine-tuning and kind of rubbing on it getting it ready for this weekend. I don’t think it has anything to do with the heat. Man, we’re used to this. I mean, hell, it’s not really that hot down here to be honest with you. Wait until Indy in August -- it's way hotter than this.”

How does racing here in July differ from February and from Talladega earlier this year? “We have two major concerns here this weekend for this race. One, is the air intake front end grill opening to the motors. We think running in a pack this weekend we’re going to get hot because it is a little hotter than what it was here in February so you’re going to have to really manage your temperatures. So, we think with the opening NASCAR is giving us that we’re going to run hot so we’re really going to have to watch our temperatures tomorrow night during the race. Two, handling is a little bit different of an issue here in July than it is in February -- always is. The track is always a little bit hotter. It bakes all day long. Even when you race at night the track is a little bit slicker, so the handling is going to be a little bit more of a characteristic, a little bit more of an issue than what we had in February. But, the biggest issue is the radiator intake grill opening is so small that you’re really going to have to watch your water temperature here.” 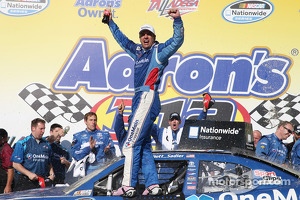 How much of a learning process is it this year racing against some of the younger drivers for a championship? “That’s a good question. The way I look at it as JR Motorsports has been fast this year everywhere. Those guys have done a really good job this past winter. They hired some key people over there and their team has just been really fast. So, we know going to some of these tracks Chase (Elliott) has been rocket fast on mile and a half tracks. So we know when we show up at some of these mile and a halves coming, like Chicago is coming down the road and places like that that we know we’re going to have to be at the top of our game. Regan Smith’s superspeedway experience the last couple of years has been fast. He’s going to run upfront, he’s going to win some races and he’s going to be in the top five. That’s kind of what we’re looking at as far as we just know week in and week out these guys are going to be strong and we’re just going to have to bring our A-game. But, the way we looked at it is -- look that’s rule number one -- you race people how they race you. Chase and I have raced each other a few times so far this year and given each other plenty of room. We were racing each other hard, side drafting and things like that, but not really putting each other in some bad situations. Regan and I had a few mishaps last year, we’ve had none this year. Just kind of -- rule number one in racing and I don’t care if you’re racing in the Trucks or Nationwide or Cup, most of the guys are going to race you how you race them. I don’t care if you’re -- it doesn’t matter whether you’re leading the points or not -- if you give room and respect to this guy at the beginning of the race, he’s going to do the same for you and vice versa.”

Is this race any different than others where you have to pay attention to who you are racing around? “Yeah, I mean that’s what happened to us here in February. We ran the top two or three the whole time and just kind of got stuck in the wrong line at the wrong time with the last six or seven laps and I think we came away with fifth and we should’ve got a way better finish than that. You 100 percent watch who you’re drafting with and who you’re around as far as being at Talladega and Daytona because some guys are better drafters than others. You want to go with the guy that can get you to the front. Yeah, you know, guys are going to talk teammates and you’ve got to work together and manufacturers and all that stuff, but at the end of the day most of the good drivers are going to go with the guys that can get you to the front and I think that’s what you do. And, you feel like sometimes when you come up and you’ve got to make a choice between a guy that’s never drafted before or doesn’t have a lot of experience and he’s side-by-side with a guy that has a pretty good track record you’re going to go with the guy with the pretty good track record because you feel like he’s going to make some better decisions and better moves that’s going to keep both you guys to the front of the field. So, you definitely pay attention to who you’re racing around and who they are and how much experience they have at these places.”

How nerve-racking is it for spotters at restrictor-plate races? “The biggest lesson I learned at spotting for restrictor-plate races is I spotted for my brother one time at Talladega in a Nationwide race about seven or eight years ago and those guys can’t see anything like they said they could. So, that’s probably the best thing I’ve ever done. Those guys do a good job with binoculars and they really work well together, but I learned a lot being on top of the roof about what these guys can see or not see. These guys are the best in the business as far as seeing what’s going on and what Brett (Griffin, spotter) is really good at with me and with Clint (Bowyer), he understands racing so much. He understands tendencies of other drivers. When certain drivers get behind you what moves they like to make like, ‘Well this guy’s not real patient. As soon as the restart is going to happen he’s going to make it three-wide.’ Or, ‘The guy behind you now is going to stay inline and likes to push and things like that.’ It’s good to have a guy on top of the roof that understands the race and has a lot of commonsense about what’s going on. For them to call two- and three-wide down the backstretch and who’s making moves, ah sometimes it might be a little sketchy. Man, that’s a long ways across there. But, those guys do a good job spotting I feel like and I think sometimes they don’t get the full credit they deserve. It’s a lot going on up there.”

Elliott Sadler has a 'good outlook' for Daytona