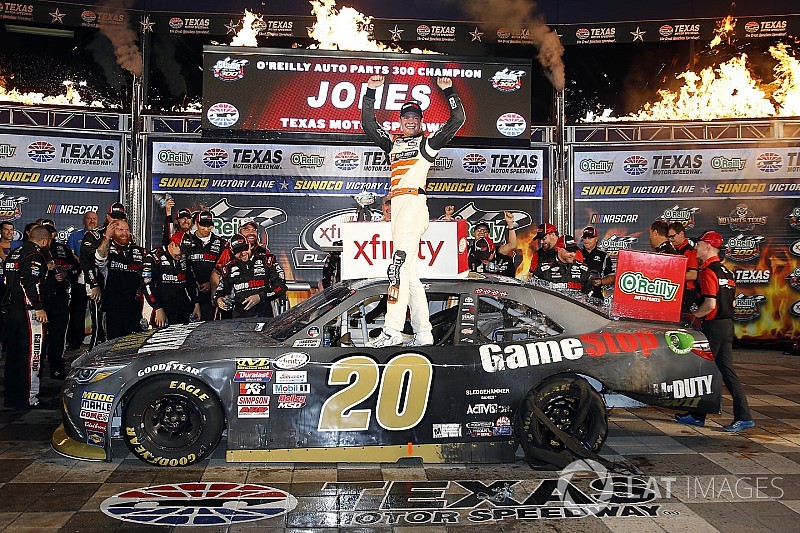 After winning both stages in the O'Reilly Auto Parts 300, Jones led 142 laps and held off Blaney by 1.018-seconds for his third win on the 1.5-mile track and his ninth-career NXS victory.

Jones, 21, was the first driver to sweep Texas NXS races since Kyle Busch in 2009.

“Starting the race off, I thought we were really fast, really good, it just didn’t turn out that way,” Jones said. “Just excited to get back to Victory Lane. It’s been two month since I’ve got a win. They’ve brought fast cars the last month, we just couldn’t find Victory Lane.”

Between stages, Larson mistakenly came down pit road before it was opened on Lap 92. He was forced to blend in with the field—since he didn’t stop for service—and entered the pits 14th.

Blaney’s lead was 1.041-seconds with 90 laps in the race. Bell, Austin Dilllon, Byron, Larson, Jones, Custer, Sadler, Ty Dillon and Koch completed the top 10. Three laps later, Larson passed Byron for fourth. On Lap 115, Jones passed Byron for fifth. Custer knocked Byron back to seventh on Lap 117 and Sadler passed him on the next circuit.

Sadler and Tifft moved up to second and third, respectively, as Austin Dillon dropped back on the restart. Blaney remained fourth followed by Bell, Custer, Byron, Dillon, Allgaier, Koch and Hemric. Blaney passed Tifft on Lap 138. Larson moved up to 11th on the next lap. He passed Hemric for 10th on Lap 142 and Allgaier for ninth on the next circuit. Blaney seized second with 55 laps remaining. Sadler dropped to third followed by Bell, Tifft, Custer, Byron, Dillon, Larson and Allgaier.

Custer passed Tifft to move into the top five on Lap 147 as Larson passed Byron for seventh.

Blaney cut Jones lead to under a second with 41 laps remaining. Sadler ran 4.558-second behind the leader. Larson caught Custer on the next lap as the cars approached traffic. He made the pass for fifth and moved in on Bell.

Austin Dillon was the first to of the leaders to pit with 30 to go. He fell to 23rd, the last car one-lap down. Jones’ advantage was .458-seconds over Blaney. Sadler, Larson, Bell, Custer, Tifft, Byron, Poole, Allgaier and Hemric completed the top 11.

Jones lead was .652-seconds with 25 to go as crews discussed strategy for their final pit stops.

Blaney pitted from second-place on Lap 185. Sadler, Tifft and Jones followed. On Lap 186, Larson took the lead. Custer came in for service from fourth on the next lap with Poole and Allgaier. Larson gave up the lead to pit on Lap 188 with Bell. Byron was the last of the leaders to pit on Lap 189.

“I think there’s nobody that could have rebounded the way we did,” said Custer, who came from a lap down to finish fifth. “I think we had a top-three car, we just didn’t have enough at the end.”

Sadler took over the points lead with a five-point advantage over Byron.

“I’m just livin’ the dream, the car was so good tonight,” Sadler said. “We have a car sitting at home just like this one and tonight was kind of a test for Homestead. It’s been a great day. We’ll take this momentum and move to Phoenix.”

Jones swept the first two stages at Texas. His advantage was .230-seconds over Larson after 90 laps.

A two-tire stop delivered the lead to Byron out of the pits. He chose the inside line for the restart on Lap 52. Jones ran second followed by Sadler, Larson, Blaney, Tifft, Poole Bell, Allgaier and Hemric. Custer restarted 21st after staying out on the track between stages. Reed, 32nd, went two laps down after a penalty for pitting too soon.

Byron’s lead was .236-seconds after the first lap but Jones was quickly closing in. Larson passed Sadler for third with Blaney in tow. Sadler dropped to fifth followed by Poole, Bell, Tifft, Allgaier and Hemric.

The third caution was triggered on Lap 56 when Angela Ruch lost control of her car off of Turn 3. That was the break Custer needed to pit for service. He restarted 19th when the race returned to green on Lap 61.

Byron held the point on the inside followed by Jones, Larson, Blaney, Sadler, Poole, Bell, Tifft, Allgaier and Hemric. Twenty-two of 40 cars remained on the lead lap. Blaney jumped behind the leaders for third but was shuffled to fifth as Brandon Jones came across the nose of Michael Annett to bring out the fourth caution.

“I hope I get a little help this time,” Byron said after being jammed by Erik Jones on the restart. Poole moved up to third followed by Larson, Blaney, Bell, Sadler, Tifft, Hemric and Allgaier. Custer advanced to 17th. Reed moved up to 29th.

The race returned to green on Lap 67 and Poole nudged Byron out of the lead after Blaney pushed the No. 48 Chevy. Jones returned to the point followed by Larson, Poole, Bell, Blaney, Byron, Tifft, Hemric, Sadler and Austin Dillon. Allgaier dropped to 11th.

With 20 laps remaining in the segment, Jones’s advantage was .825-seconds over Larson followed by Poole, Bell, Blaney, Tifft, Byron, Hemric, Austin Dillon, Allgaier, Sadler and Custer. Five laps later, the Jones and Larson checked to four-seconds over third-place Poole. Blaney passed the No. 48 Chevy on Lap 78. Bell dropped to fifth. Hermit passed Byron with 10 to go in the stage.

With eight laps to determine the stage, Bell spun in Turn 2. He dropped to 15th.

The race returned to green with four laps to go and Jones in the lead followed by Larson, Poole, Tifft, Sadler, Hemric, Gaughan, Custer, JJ Yeley, Ryan Sieg, Ross Chastain and Blaney. Blaney advanced from 12th to eighth over the next two laps.

Byron advanced to ninth with one lap remaining.

Erik Jones led the field to green with Custer alongside, but the No. 00 Ford fell through the field in the opening laps. He dropped to 15th after three laps.

Custer told the crew, “I’m really free here. I can’t do anything, I think something might be wrong.” He lost five additional positions over the next two circuits.

Custer had entered pit road for a diagnosis on Lap 9 as Ty Dillon spun off of Turn 2.

The No. 00 Stewart-Haas Racing team discovered Custer had a flat-right rear tire. He restarted 38th, one lap down, when the race returned to green on Lap14. Dillon, returned to the pits and restarted 35th.

Jones lead over Sadler was .318-seconds with 15 laps to decide the stage. Twenty-nine cars remained on the lead lap. Larson passed Sadler on Lap 32 and set his sights on Jones. Blaney ran fourth followed by Tifft, Bell, Byron, Poole and Hemric.

Larson trailed Jones by two-car lengths with 10 to go. Five laps later, Jones’ lead was .254-second over the No. 42 Chevy. Sadler, Blaney, Tifft, Bell, Byron, Allgaier, Poole, Hemric and Reed completed the top 11. Two laps later, Reed was forced to pit after brushing the wall. He restarted  Custer ran 31st, one lap down.

How the Xfinity title contenders stack up at Texas