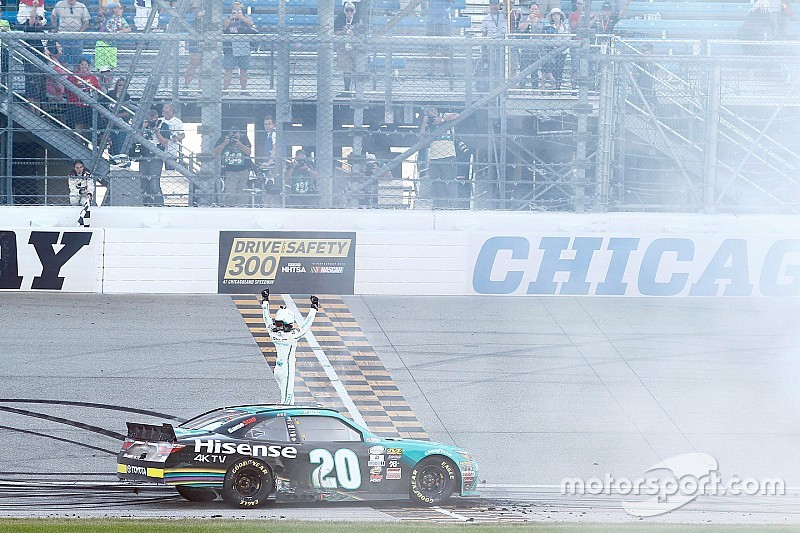 Erik Jones capitalized on the late-race misfortune of Kyle Busch to win Saturday’s Drive for Safety 300 at Chicagoland Speedway and cement his No. 1 seed in the inaugural Xfinity Series championship Chase.

Jones restarted fifth on the final restart with 14 laps remaining and outdueled Elliott Sadler to move into the lead with nine laps left.

The win is Jones’ fourth this season and sixth of his career. Kyle Larson was closing on Jones on the final lap but hit the wall, which slowed his progress, and he finished second.

Of the 12 drivers in the Chase field, only three – Jones, Sadler and Suarez – have won races this season. The remainder made by the field by points.

“I knew we were in a good spot on tires, but we were pretty far back in the lineup,” Jones said after the race. “I didn’t know if we would have time to get back up there but we had a really good race car.

“We had to go chase Elliott down. It was just a matter of time before we got around him. It was an awesome day – winning right before the Chase is great momentum for us. I’m really excited – it’s our second win at Chicagoland.”

Larson said his car was too tight at the end of the race to mount an effective challenge for the lead.

“Erik and Sadler kind of got away from me and I knew I could get the top (groove) going but I also knew Erik would move up,” Larson said. “He did, and I tried to carry a lot of throttle off (Turn) 2 and maybe to get a run but it didn’t work out.”

Only two Chase positions were left up for grabs entering the race, which was claimed by Koch and Sieg. Thankfully for Reed, he was already locked because his race was cut short after a run-in with Larson on Lap 101.

Reed appeared to squeeze Larson to the top of the track when Larson cut back down on him and turned him hard into the wall.

“I thought it was tight racing. Looking back, I should have just lifted down out of there. He was on my door pretty tight and got me aero tight coming out of (Turn) 2 there,” Reed said. “He probably could have given me the spot and was probably upset he had gotten into the wall earlier and was sliding backwards and didn’t want to give me the room.

Brandon Jones will be back with RCR in 2017