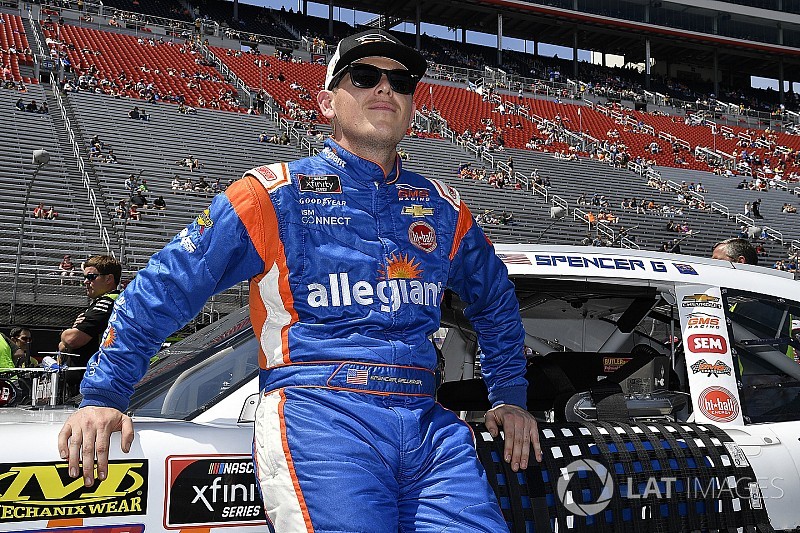 NASCAR issued a statement on Wednesday stating that it was informed on Tuesday that Gallagher, 28, was in violation of the sport’s substance abuse policy and he has agreed to enter NASCAR’s Road to Recovery program immediately.

The date NASCAR is notified is not the same date as violation actually occurred.

Because of his victory at Talladega (Ala.) Superspeedway last weekend, Gallagher was to be eligible for this weekend’s $100,000 Dash4Cash bonus at Dover, Del. That eligibility has been rescinded.

Ryan Sieg, who finished sixth in last weekend's race at Talladega, is now the fourth driver eligible for this weekend's $100,000 Dash4Cash bonus, taking Gallagher's place in the program.

“I recently have had a positive result in a NASCAR drug screen which has violated NASCAR’s substance abuse policy," said Gallagher. "I want to assure everyone in the NASCAR community this one time error in judgement will never happen again. I am taking the steps to enroll in the Road to Recovery program supported by NASCAR. I would like to say that I am sorry to all of the GMS organization for my actions, especially my team and team owner, who have worked so hard this year and have put faith in me. I also want to apologize to NASCAR, Chevrolet and my fans for letting them down. I have not upheld the behavior that is expected of me. I promise you all here and know, I will do whatever it takes to make this right.”

“GMS Racing was notified that driver Spencer Gallagher gave a positive result from a NASCAR drug screen," said Mike Beam, President of GMS Racing. "GMS fully supports NASCAR’s policy on substance abuse and we do not condone this type of behavior. First and foremost, our entire organization wants to apologize to NASCAR, our sponsors, teammates and fans due to this policy violation. Spencer has agreed to participate in NASCAR’s Road to Recovery program. A substitute driver will be announced at a later date.”