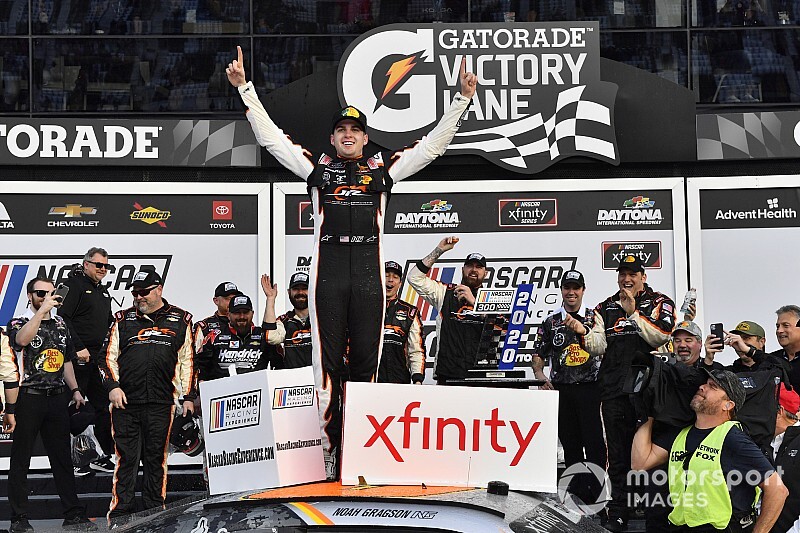 A shove from Harrison Burton gave Gragson the lead on the next-to-last-lap and he remained out front when Brandon Brown turned Michael Annett on the final lap, which immediately placed the race under caution.

Since the wreck came on the last lap, the race was declared official, handing Gragson his first series victory in his second fulltime season driving for JR Motorsports.

"I'm so, so thankful," Gragson said. "I'm so thankful for this opportunity. I'm very, very proud of this team. Everybody from JR Motorsports, this No. 9 team, Hendrick Motorsports, allowing this to happen, the power was awesome. Thank you to Hendrick engines. Man, I'm speechless right now. I didn't think this would come.
"There are so many people who have made this possible for me. Everybody that has helped me get to this point. I spent a lot of time with Dale (Earnhardt Jr.) this week talking with him for about two hours, wanting to be a better speedway racer. He told, 'Go have fun. Wreckers or checkers, you got to manage your gaps. Be there at the end and just go lead the damn thing.' So, that's what we did.
"Thanks to all the fans. We did it!"

On Lap 82 of 120, a final round of green flag pit stops began for most of the lead-lap cars. Gragson was the first off pit road.

Alex Labbe inherited the lead after the first group that stopped but he and several others had yet to make their final stop.

On Lap 101, Gragson passed Labbe and moved into the lead as the final cars made their final stops for fuel and tires.

On Lap 107, Josh Bilicki spun out and Justin Allgaier slammed into the back of the car of Jeremy Clements, who appeared to slow considerably because of the spin.

Gragson remained the leader on the restart on Lap 114, followed by Jeb Burton, Briscoe, Cindric and Jones.

After the restart, Cindric got into the back of Jeb Burton in Turn 3 to trigger a multi-car wreck that also involved Brandon Jones, Brett Moffitt, Ray Black Jr., Jesse Little and David Starr and brought out a red flag to clean the track of debris.

Following a nearly eight-minute red flag, the race returned to green on Lap 118 with Briscoe continuing to lead the way, followed by Gragson, Jones, Harrison Burton and Justin Haley.

Allgaier claimed the Stage 2 victory under caution when a wreck erupted on the last lap involving Myatt Snider, Riley Herbst and Chris Cockrum.

Following the break between Stages 1 and 2, most of the lead-lap cars elected to pit but Allgaier stayed out and inherited the lead when the race returned to green on Lap 36.

Gragson was penalized for speeding on pit road during his stop and had to restart the race from the rear of the field.

Harrison Burton got a shove to the lead on Lap 37.

On Lap 38, Michael Annett got loose off Turn 2 and cut across the field collecting the cars of Joe Graf Jr. and Austin Hill to bring out another caution.

When the race returned to green on Lap 44, Harrison Burton led the way followed by Allgaier and Hill.

Just before the start of Lap 45, Cindric gave Allgaier a shove to the front to retake the lead.

With 10 laps remaining in the second stage, Allgaier remained out front followed by Cindric and Jeb Burton.

Jeb Burton blocked his teammate Annett several times on the final lap to maintain his lead and take the Stage 1 victory.

Allgaier was third, Gragson fourth and Haley completed the top-five.

Snider, who started on the pole, held the lead through the first 10 laps as he was followed by Haley and Annett.

On Lap 14, Harrison Burton got a shove out to the lead only to see Snider grab it back on the following lap.

The hood flew off Jeremy Clements’ No. 51 on Lap 19 on the backstretch and his car dropped other debris to bring out the first caution of the race.

Most of the lead-lap cars elected to pit but Snider remained on the track and in the lead when the race returned to green on Lap 24.

Cindric gave Jeb Burton a big shove after the restart and he moved into the lead on Lap 25 as Snider dropped to second.

Three drivers had to start the race from the rear of the field – Chastain for a driver change and Joe Nemechek and J.J. Yeley for unapproved adjustments.