In Friday's Daytona Xfinity race, one car was not like the others 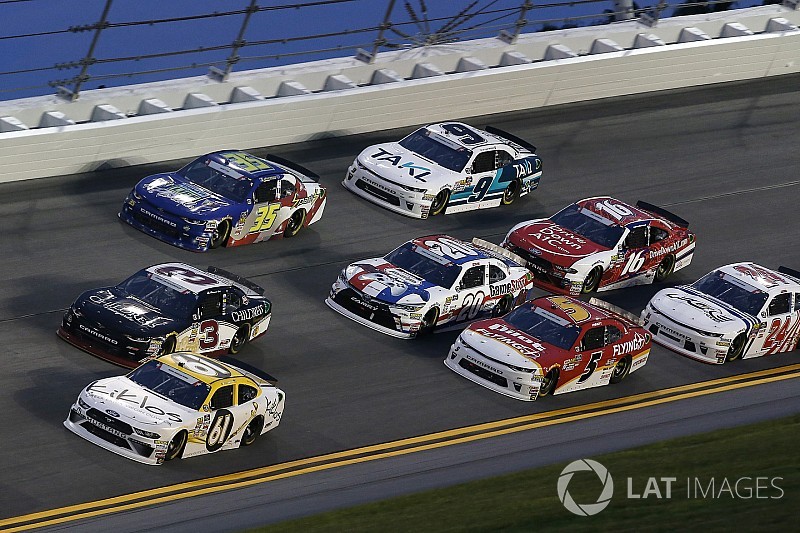 Looking at the top five finishers in Friday night’s NASCAR Xfinity Series race at Daytona, there was one car not like the others.

Kaz Grala, driving the No. 61 Ford for Fury Race Cars, managed to finish fifth in car that just a week or so earlier was destined to become a Stewart-Haas Racing show car.

The car had never turned a competitive lap and had been used as a backup car for superspeedway races dating back to the chassis’ creation at then-Evernham Motorsports over a decade ago.

The car is also a steel-bodied car and according to NASCAR rules, superspeedway races were the last events steel-bodied cars were allowed to be used this season. Once Friday night’s race was over, the car’s chances to see on-track competition again were nil.

“This is our first top five with Fury, but I feel like we’ve had speed all along so far since we’ve been with the No. 61 team,” Grala said after the race.

“To see that we can come out here on a superspeedway, where it’s aero dependent, motor dependent and run with the top guys and get a good finish is really exciting for us. I know it’s a big motivation booster for us.”

Grala began the year with JGL Racing but left the team after his May 5 race at Dover (Del.) International Speedway. He moved to Fury Race Cars, which is co-owned by Grala’s father, Darius, Tony Eury and Jeff Fultz, but which had mostly competed in Super Late Models.

Fury acquired three cars from JGL and another from Roush Fenway Racing, but the decade-old Evernham car was their only chance to compete at Daytona this week.

Even with the disadvantages to the composite-body cars which nearly filled the field, Grala was able to remain in contention throughout the race.

Even a late-race pit stop for a flat right-rear tire did end his day as a caution came out which after that. With the help of the race going to overtime, Grala raced his way from 15th to fifth.

“I think that’s a really, really good recovery for our team considering the trouble we had late in that race. I’m just really proud of everyone at Fury Race Cars, Ford Performance and huge thanks to Kiklos and Marlowe’s Tavern for jumping on board and allowing us to do this race,” he said.

“I had a lot of fun today. I love plate racing and two races here this year and two top-fives. I’ll take it. That’s really good for our team.”

There’s still work to be done.

Fury needs additional sponsorship to allow Grala to continue racing next week at Kentucky. He sits 44 points out of the final playoff position in the Xfinity Series but it’s going to be a week-to-week battle to remain on the track.

“Right now, our future is unsure. We don’t have the Kentucky race sold yet, so I’m not sure if we’ll be out there next week, but good runs like this always help try to sell more races going forward,” he said.

“Hopefully, we’ll be able to continue running at least some this year.”

Christopher Bell wants to be "the guy" in the Xfinity Series