Buescher indicated that a large part of his decision to switch teams involved RAB Racing's strong ties to Toyota and the Toyota Racing Development engine program.

In a totally unexpected move, that no one saw coming, James Buescher will be leaving Turner Scott Motorsports to join team owner Rick Ware and his RAB Racing organization. The move was confirmed by a mid December press release that said: 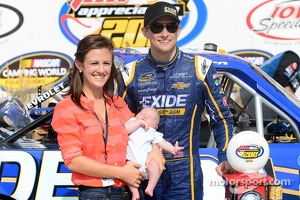 "RAB Racing announced that they have signed 2012 NASCAR Camping World Truck Series Champion James Buescher to a multi-year deal to compete full time in the NASCAR Nationwide Series. Buescher has competed full time in the NCWTS for the past three seasons and has recorded one championship and two third-place finishes in the drivers' championship standings.

Buescher will have veteran crew chief Chris Rice on top of the pit box for the 2014 season. In 2013 Rice, lead the #99 Toyota Camry to two poles, two top-5 finishes, and six top-10 finishes. Sponsorship details for Buescher and RAB Racing will be announced in the near future."

At literally the same time, TSM issued a prepared statement saying they had agreed to release Buescher from his contract obligations which allowed him to make the move. Again, this decision was regarded by many as being very surprising. Buescher had a stellar 2013 season with TSM that included two wins, four top five finishes and 14 top ten finishes while finishing third in the final championship standings.

Buescher indicated that a large part of his decision to switch teams involved RAB Racing's strong ties to Toyota and the Toyota Racing Development engine program. He later referred to that as being major factors that were in the best interest of his professional future in NASCAR.

The really interesting aspect to this story actually had nothing to do with the on track process of taking care of business. It was the element of family. Steve Turner, one of the principal partners in TSM, is Buescher's father in law. In an interview, Buescher said "all parties worked diligently to separate business from family."

Veteran Carl Long to return with a Dodge

Spencer Gallagher rising through the ranks