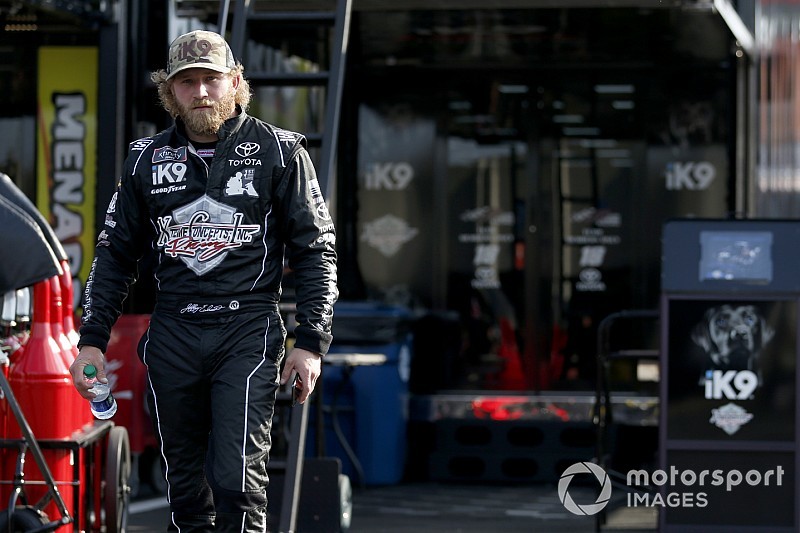 Jeffrey Earnhardt’s career-best NASCAR Xfinity Series finish included a run-in with the wall and a visit to the infield care center.

It took just about everything Earnhardt could muster but he rebounded late in Saturday’s Alsco 300 at Charlotte Motor Speedway to finish third – his best finish in his 157 career starts across NASCAR’s three national series – Cup, Xfinity and Trucks.

His previous best also came this season, when he finished sixth at Atlanta in February. All three of Earnhardt’s top-10s this Xfinity Series season have come while he has been running a partial schedule in Joe Gibbs Racing’s No. 18 Toyota.

“We just gave it all we had there at the end, that’s all I had left in the tank,” Earnhardt said. “I’m just thankful for the opportunity, it’s a dream come true to get to drive in Joe Gibbs Racing equipment and live out my dreams.

“We’re out here with the JGR and the Xtreme Concepts Racing guys to go for wins and we’re definitely working toward that.”

Earnhardt, the grandson of the late seven-time Cup champion Dale Earnhardt, qualified ninth and ran in the top-10 much of the first two stages.

On Lap 141 of 200, Earnhardt tagged the wall and radioed his team that he had a tire going down. The caution came out on the following lap and he pit for new tires and fell a lap down.

He fell as low as 24th in the running order but returned to the lead lap during another caution on Lap 158. He restarted 19th and drove to third before the finish.

Immediately after the race, Earnhardt was taken to the infield care center suffering effects from the extreme heat on Saturday. He was evaluated and released a short while later.

“It’s pretty awesome to come out of here with a top-five. I kept flirting with the top line, getting higher and higher. Once you get up there and get loose, there’s nowhere to go but in the wall,” he said.

“Those guys did a great job getting it sorted out and getting us back out there to come back from a lap down.”