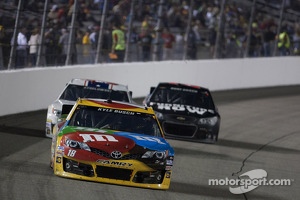 During initial on-track activity Thursday and Friday, the No. 54 Toyota team felt their Camry was strong, showing third-quick in practice one and topping the speed chart fastest in the second and final practice session. Crew Chief Adam Stevens was prepared for changing track conditions during practice and the race, commenting early in the weekend the biggest challenge of Richmond’s .75-mile oval is managing tire wear, especially with varying elements of a morning practice session and an evening race. That sentiment would later be realized.

As the sun set over Richmond’s short track, Busch took the green flag from the front row, as a result of his second-place qualifying effort. Within the first 10 laps he dropped to fourth place, immediately feeling a car condition he had not experienced earlier in practice. “Snug and snappy,” Busch described to his crew during the first of eight event cautions. The experienced Richmond winner was feeling ‘tight’ and ‘loose’ conditions throughout the turns, however Stevens explained it was too early to pit, due to tire strategy.

Over the first quarter of the race, Stevens coached Busch over the radio, asking the veteran driver to ‘take care of it’ while Busch battled an unbalanced car. Finally on lap 102 of the 250-circuit race, a yellow-flag caution appeared offering the No. 54 team time for a pit road visit. “I’m really tight dude,” Busch confirmed to Stevens and brought the black Monster Energy machine to pit road for Goodyear tires, Sunoco fuel and some car adjustments. The subsequent restart would prove productive for Busch, who relayed back to his team, “That was a really good change, I liked it.” He proceeded to remain strong in the fourth position and at lap 123 Stevens told Busch he was the fastest car on track.

A second pit-road visit under caution on lap 150 offered time again to make car adjustments. Busch later confirmed the changes were helpful during the initial green-flag laps, but would fade away the longer the run went and did not allow him to improve on his second-place spot to race leader Kevin Harvick. A third pit road visit for the team on lap 192 gave the team another try when they decided to ‘take a swing’ at the car. “We have nothing to lose,” exclaimed Busch. Further wedge and now track bar adjustments were made and Busch was happy with the pit crew’s speedy adjustments, telling them as he left pit road, “That’s just fine boys!”

One of the most exciting moves of the night came towards the final laps of the race, when on lap 225 Busch made an aggressive charge on leaders Harvick and Brad Keselowski, passing them on the outside lane and successfully taking the lead. He would maintain the front spot for 15 laps and the Monster Energy crew started to see ‘checkers’ in their future. Unfortunately, the field endured two more yellow-flag caution periods and subsequent restarts. One of which Busch was able to prevail and maintain the lead, but the last one ending differently as worn tires hindered Busch from keeping his No. 54 machine up front. In the last laps Busch relinquished the first-place spot, but was able to hold on for his sixth top-five finish this year, securing third place. 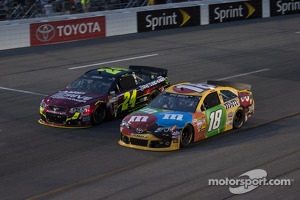 When interviewed post-race, the four-time Nationwide series winner at Richmond International Raceway described the track, “I thought we had a decent night. Unfortunately, we just didn’t quite have enough to hang with those front two -- they were really, really fast. In practice we had no indication of that. I thought we were pretty good. Our car seemed fast and we made some minor changes to it. I guess we kind of dialed ourselves out a little bit you could say. We got up there and instead of having about an eighth-place car, Adam (Stevens, crew chief) and the guys made some really good changes and got us to a third-place car and that’s where we ended up. We’ll take that -- good day for the Monster Energy team and we’ll go onto the next one.”

On the race challenges with tire strategy and changing car conditions, Busch continued, “It was good racing tonight. Certainly there were some tense moments a few times, but it seemed like it was more so between those two (Brad Keselowski and Kevin Harvick) and a couple of times between Brad (Keselowski) and myself. You’re fighting for everything you can get and there’s not a whole lot of grip out there, but when there is, you try to get what you can out of it. Sometimes there’s a little bit of room that guy leaves you and it’s just enough to get your nose in there and you can get right up to that guy’s left-rear quarter panel and make him a little loose off the corners and you get that, but I thought the racing was good.”

With its sixth consecutive top-three finish, the No. 54 Monster Energy team owned by J.D. Gibbs maintains first place in the Owner’s Point standings, now leading the field by 31 points over Roger Penske’s No. 12 entry.

The NASCAR Nationwide Series competes again on May 4 at Talladega (Ala.) Superspeedway in the Aaron’s 312 race on Saturday, with television broadcast starting at 3 p.m. EST on ESPN.

Kyle Busch Motorsports driver Joey Coulter will make his first start at Talladega in three scheduled races behind the wheel of the Joe Gibbs Racing No. 54 Monster Energy Camry.