Ohio businessman to spearhead the marketing of team to sponsors

GAFFNEY, S.C. (June 7, 2012) – Johnny Davis, owner of JD Motorsports No. 01 and No. 4 Chevrolets in the NASCAR Nationwide Series, has taken on Ohio businessman and former NASCAR team owner, Gary Keller, as a partner for his operation. 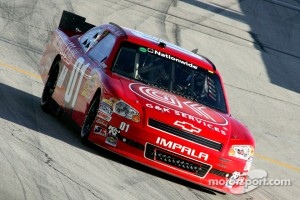 The team will now officially be called JD Motorsports with Gary Keller. The move is one where both parties quickly agreed on the same thing – they want to improve the results and take it to the next level in competition.

Davis, who has solely-owned the team since 2002, and Keller, who has owned an ARCA, NASCAR Craftsman Truck and Nationwide Series team since 2001, have joined forces. Davis will oversee the team on a day-to-day basis at his shop, and Keller will concentrate on marketing and sponsorships for the team from Ohio.

“In talking to Johnny (Davis) I knew right away I had found the right person to partner with in racing,” said Keller, owner of Disaster Services of Environmental Specialists in West Chester, Ohio. “He has no airs about him and JD Motorsports is just the type of team I know I can help escalate on and off the track.

“By combining our knowledge and resources, we can improve the team and make it better. I am very impressed with him and what he’s trying to do in NASCAR racing. And, I want to help achieve their, or should I know say “our” goals, in the sport.”

Keller’s business deals with water damage and mold remediation for businesses and residential customers after hurricanes. His racing background includes owing an ARCA team in 2001, then a Craftsman Truck team with Tim Sauter driving in 2003 before he moved to Nationwide Series in 2004 and made some Cup attempts with Mike Wallace that same year. That connection is what led Keller to Davis, and the formation of JD Motorsports with Gary Keller this week.

“It quickly became apparent to me that Gary and I were on the same page from the first few minutes we started talking,” Davis said. “He wants to be with a team that wants to do its best on the track, and we want him to know we can achieve all the goals together.

“He’s owned teams so we both know what we’re talking about when it comes to the business of running a race team. This partnership is just the shot in the arm JD Motorsports… I mean, JD Motorsports with Gary Keller, needs at this point in the game.

“I know what this team is capable of doing. We just needed that something extra to get there, and both Gary and I know it can be achieved together. I’m glad he took an interest in this team to bring some new marketing ideas to the table.

“We need to, and can, step up this program. I’m looking forward to moving forward with him as a partner.”