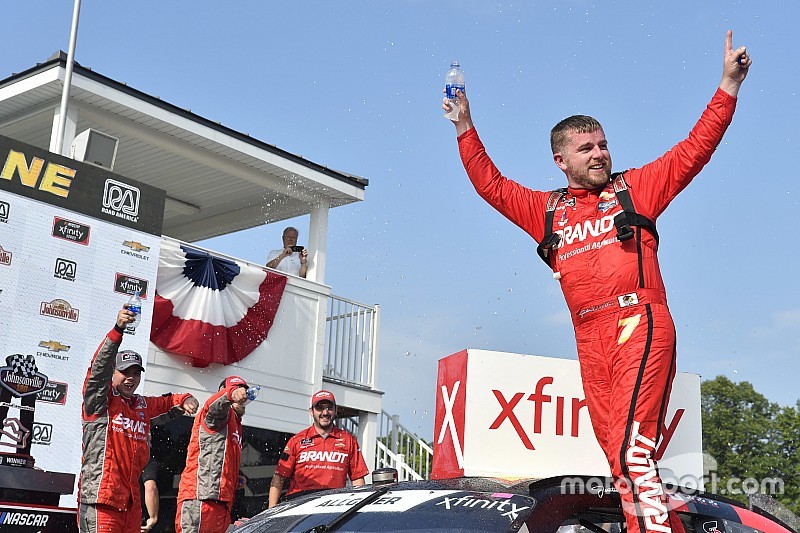 Justin Allgaier is using a late-summer road trip to become a top contender for the NASCAR Xfinity Series championship.

Allgaier, who now has nine career wins, is tied with Christopher Bell with the most wins this season.

"The last restart there, (James Davison) kind of left before I did and (Matt Tifft) gave me a shot based on he didn't think (Davison) was going. I spun the tires really bad after I got hit," Allgaier said in Victory Lane. "I thought I had gave it away.

"Then when he made the mistake down in (Turn) 8, I knew I just had to be smooth and fast. This team is awesome. I told them on the radio after the race that it was an honor to drive these race cars. I can thank everyone enough that's on this race team and back at JR Motorsports."

After being informed he was now the regular season points leader, Allgaier as asked if he could believe how this season as developed.

"No, I can't," he said. "This team is incredible. They never give up. I never would have thought that we could have a dream season like this one. Wins on two road courses, would you believe that?"

Following the break between Stages 2 and 3, Allgaier and several others elected to remain on the track and took over the race lead when the race returned to green on Lap 23. He was followed by Brendan Gaughan and Katherine Legge.

Gaughan quickly grabbed the lead following the restart as Allgaier dropped to second and Legge remained in third.

On Lap 24 while running in the fourth position, Legge spun out and dropped back to 25th.

With 20 laps left in the race, Gaughan moved out to a more than one-second lead over Davison as Allgaier moved into third.

Caution was displayed on Lap 29 when leader Gaughan went off course in Turn 3 followed by Davison from what appeared to be oil on the track. During the incident, Tifft inherited the race lead.

During the caution, Ryan Sieg and Allgaier elected not to pit and took over the first and second positions, respectively, on the restart with 14 laps remaining.

Allgaier went to the inside of Sieg in Turn 7 to reclaim the lead on Lap 32 as James Davison moved into second and Tifft into third.

Josh Bilicki got off course, hit the tire barrier and got stuck in the gravel pit on Lap 37 to bring out a caution. On the restart on Lap 39, Allgaier remained out front followed by Davison and Tifft.

Davison moved into the lead in Turn 1 as Allgaier dropped into second. In Turn 7, Davison went wide and Allgaier reclaimed the top spot.

In Turn 7 with five to go, Tifft got in the back of Bell and sent him spinning off course.

With three laps remaining, Allgaier held a small advantage over Davison with Justin Marks close behind in third.

In Turn 8, Davison and Marks both spun as they raced furiously for position, which allowed Tifft to move back into second and Custer in third.

Hemric held off a fast approaching Tifft to claim the Stage 2 win, his third stage victory of the 2018 season.

Following the break between Stages 1 and 2, Gaughan and Austin Cindric elected to remain on the track and took over the first and second positions, respectively, on the restart on Lap 13. They were followed by Jeremy Clements, Tifft and Bell.

By the third turn on the restart, Cindric got around Gaughan on the outside and moved into the lead for the first time.

On Lap 15, smoke began pouring out of Cindric’s No. 22 Ford as Hemric got around him for the lead. Cindric came to a complete stop on the track, which brought out a caution.

Among those who elected to pit under the caution were Gaughan, Clements, Tyler Reddick and Bill Elliott. On the restart on Lap 18, Hemric led the way followed by Davison, Sadler and Tifft.

With two laps remaining in the stage, Hemric remained in the lead with Tifft not far behind and Sadler up to third. Davison elected to pit just before pit road closed.

Tifft held off Bell in a one-lap shootout to claim the Stage 1 victory.

Gaughan was third, Marks fourth and Clements completed the top-five.

On the final restart of the stage, Elliott – starting his first NASCAR event since 2012 – received significant damage to the front of his No. 23 Chevrolet when he got into the back of Brian Henderson as the field checked up trying to avoid a wreck by Brandon Jones.

Tifft, who started on the pole, took command early in the race and warded off an early challenge from Davison for the lead.

On Lap 3, Custer had moved up to the second position as Davison dropped to third, followed by Bell and Gaughan.

Also on Lap 3, James French ran into the gravel pit in Turn 1, which produced the first full-course caution of the race. Among those who pit during the caution were Daniel Hemric, Sadler, and Reddick.

On the restart on Lap 7, Tifft continued to lead the way followed by Custer and Bell.

In Turn 3 on the restart, Ryan Reed ran off the course into the gravel pit and slammed into the wall, doing extensive damage to his No. 16 Ford.

NASCAR finally displayed a caution on Lap 8 as Reed could not get his car back on the course. On the restart with one to go in the stage, Tifft remained out front followed by Custer and Bell.

Before the race, four cars – those of Garrett Smithley (unapproved adjustments) and Cindric, Kaz Grala and Carl Long (unapproved tire changes) – had to move to the rear of the field to start the race.

Bill Elliott: "I feel like I hit everything but the lottery" in return