But when it came to the final push, there they were – Kahne charging from eighth during a green-white-checkered finish and Sieg nudging him past Regan Smith for the victory. 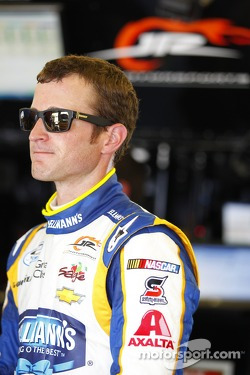 “Ryan Sieg was pushing me hard, letting off and bumping and that was the reason we were able to win,” Kahne said. “Sieg hit me from behind and hit me hard. I just kept getting more momentum coming to the line.”

The victory by just 0.021 seconds (third closest in the series at Daytona) was the second Nationwide triumph in a row for JR Motorsports and owner Dale Earnhardt Jr., who won at Kentucky Speedway last week with Kevin Harvick driving the No. 5 Chevrolet.

Earnhardt couldn’t lose in the photo finish. He also owns the car of Smith, who was denied a 2014 Nationwide Series sweep at Daytona.

“It’s been a while since I’ve been in any victory lane. It felt great,” said Kahne, who said he felt “kind of trapped” in mid-pack for much of the race.

“We just kind of sat there through most of the race. I was kind of at the wrong place at the wrong time. Then, the last half-lap I had tons of momentum. The cars in front of me moved in the right direction. Ryan Sieg was pushing and letting off and bumping and hitting me good and hard. That was kind of the whole reason we were able to win.”

On the final restart, Smith, who led a race-high 47 laps, had his hands full fending off Kyle Larson, who was being pushed by Ryan Reed. Meanwhile, Smith was getting help on his rear bumper from Joey Logano, who battled back from an early-race speeding penalty and finished sixth.

“I didn’t even know the 5 (Kahne) had a run until we were past the start-finish line,” said Smith, who has excelled at restrictor plate tracks this season with his victory at Daytona and third-place finish at Talladega. “I knew he had so much momentum when he went past me, I kind of figured he nipped me. I had enough time to look at the (scoring) pylon real quick and it had already adjusted, so I knew, right there.

“It’s amazing at the end of these races,” Smith added. “We hit each other all race long and every time somebody touches you in the middle of the corner it’s ‘Oh, man, don’t do that.’ It feels like the car is dancing around. Then we get out there at the end and we just blast the back bumpers off each other and somehow make it back to the stripe.”

Sieg, driving the Pull-A-Part Used Auto Parts Chevrolet for RSS Racing, not only earned his best career finish (third) but praise from both Kahne and Earnhardt, who said he noticed how hard he raced earlier in the season at Dover despite less-than-top equipment.

“It was crazy,” Sieg said of the finish. Kasey got clear and I just pushed him a little harder at the end. He wasn’t squirrely or nothing, so I kept going.”

“(Sieg) does a great job,” Kahne said. “It’s tough to run with the JR team and Gibbs and Penske and Roush and Turner Motorsports. He does a good job with what they have, and if he keeps it up, he’ll get more opportunities.”

What had been a nearly-clean race turned chaotic with two crashes in the final seven laps, the second of which involved Elliott Sadler as he tried to rally from 11th place. Like Sadler, contenders Kyle Busch and Chase Elliott also required pit stops before the final restart.

Smith regained the Nationwide Series points lead, taking a 12-point advantage on Sadler, who led 28 of the first 35 laps but was forced to return to the pits after the first round of pit stops left him with a wheel vibration. Sadler dropped all the way to 27th, a lap down, and finished 21st after his incident on the restart with three laps remaining.

The finishing order was also significant because the top four finishers among full-time Nationwide Series drivers (Smith, Sieg, Reed, who finished fourth, and Jeremy Clements, who rallied for eighth), qualified for the Nationwide Insurance Dash 4 Cash program which will pay at least $100,000 to top performers in each of the next four races.

Kyle Busch, no worse than fourth in any of his previous 12 Nationwide starts this season, seemed poised for another strong finish. He led seven laps but settled for 17th after his late pit stop. Joe Gibbs Racing was dominant early with Sadler, Busch and Darrell Wallace Jr. (seventh) running 1-2-3 in front of Trevor Bayne and pole sitter Dakoda Armstrong for much of the early going.

Armstrong earned the pole in rain-shortened qualifying and was in contention for much of the race before falling to 19th. Jeffrey Earnhardt, driving despite a broken collarbone, gave way to relief driver Matt DiBenedetto on the way to a 33rd place showing.